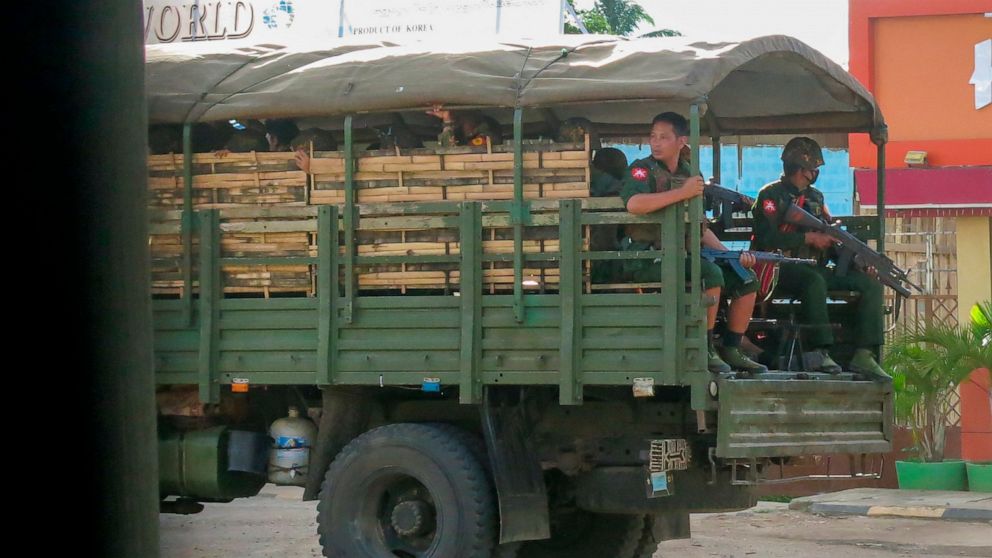 GENEVA — The U.N. human rights chief is warning of a military buildup in parts of Myanmar and rising violence, with the army using heavy weapons against armed groups as well as civilian targets, including Christian churches.

Michelle Bachelet said more than 108,000 people have fled their homes in eastern Kayah state in the last three weeks, and her office cited credible reports that security forces have shelled civilian homes and churches and blocked access for humanitarian aid.

Myanmars military, the Tatmadaw, have a duty to protect civilians, said Bachelet, the U.N. high commissioner for human rights.

The international community needs to unify in its demand that the Tatmadaw cease the outrageous use of heavy artillery against civilians and civilian objects, she added.

The military, which ousted the elected government of Aung San Suu Kyi in February, has faced widespread opposition to its rule, initially by massive nonviolent protests. After soldiers and police used deadly force to crush the peaceful demonstrations, a low-level armed insurrection has emerged in both the cities and countryside.

Bachelet’s office cited credible reports that at least 860 people have been killed by security forces since Feb. 1, mostly during protests, and that more than 4,800 people including activists, journalists and opponents of the junta are in arbitrary detention.

In just over four months, Myanmar has gone from being a fragile democracy to a human rights catastrophe,” Bachelet said. “The military leadership is singularly responsible for this crisis, and must be held to account.

Bachelet is set to update the U.N.’s top human rights body, the Human Rights Council, during its next session in July, her office said.

Jonathan Diba-Musangu, 23, met his victims through a church in Rochdale where he taught Sunday school.
Read more

A year after the first UK lockdown began, there are many who doubt the necessity of such restrictions.
Read more

Several California Democrats are calling for limiting or halting offshore drilling in the wake of a major oil spill off the state's coast this weekend.The 126,000 gallon spill prompted beach clos...
Read more

A lack of spark and too predictable? Spain are under pressure after another disappointing result as Robert Lewandowski ignites Poland's hopes
Read more

Violence has jumped since the start of the pandemic, but it's still nowhere near the levels seen three decades ago, according to FBI data.
Read more

Technician who disabled emergency brake to blame for Italian...

A judge in Italy indicated on Sunday that a service technician who purposefully disabled a cable car's emergency brake was the one responsible for the crash that resulted in 14 deaths.Three suspe...
Read more

Astronauts arrive at pad for SpaceX flight on used...

In a rare admission of the weakness of Chinese coronavirus vaccines, the country’s top disease control official says their effectiveness is low and the government is considering mixing them to give them a boost
Read more

Some Republicans and conservative pundits to paint the president as a doddering fool whose White House is actually run by other people. But given the country’s mounting problems, why wouldn’t it be in the opposition’s interest to blame the guy at the top?
Read more

Fed expects to keep its key rate near zero...

The Federal Reserve foresees the economy accelerating quickly this year but still expects to keep its benchmark interest rate pinned near zero through 2023, despite rising concerns in financial markets about potential higher inflation
Read more

Building a fixed link would be too expensive, a feasibility study is expected to conclude.
Read more

Rate the players in the Euro 2020 quarter-final between Czech Republic and Denmark.
Read more

China Evergrande Group (3333.HK) on Tuesday missed its third round of bond payments in three weeks, intensifying market fears over contagion involving other property developers as a wall …
Read more

Uganda-Tanzania $3.5bn oil deal: What you need to know

Uganda and Tanzania have signed a $3.5bn oil pipeline deal which is to create up 10,000 jobs.
Read more

Kent's Ollie Robinson hits a century against Northamptonshire at Canterbury in a game that looks destined to be a draw.
Read more

Google offers new timeline for the death of browser...

Here's our selection of the 10 best game offers in the Steam Autumn sales 2021.
Read more

Sunac China Holdings Ltd. raised about $953 million through the sale of new shares as well as a stake in its property management unit, the latest Chinese developer to seek funds amid an industry-wide liquidity crunch.
Read more

Two people in an SUV died Friday when their vehicle, traveling southbound on I-65, crossed the median and hit the front end of a Greyhound bus, according to Indiana State Police Sgt. Jeremy Piers.
Read more

A banker wanted by the U.S. on money laundering charges was denied bail in the U.K. after he was arrested disembarking a private jet he flew into the country.
Read more

Taiwan and the Pacific nation of Palau will launch a travel bubble next month, allowing people to travel between the islands without a COVID-19 quarantine
Read more

China warns US about interfering in internal affairs after...

China warned the U.S. against interfering in internal affairs amid tensions between Beijing and Washington over the mainland's influence over Hong Kong. The warning came from Chinese ...
Read more

Harris to address migration as she meets Guatemalan leader

Scotland could be a ‘football backwater’ without VAR –...

Scottish football is in danger of becoming a "football backwater" if VAR is not introduced, believes Hearts chief executive Andrew McKinlay.
Read more

Microsoft Corp. said the hackers behind the SolarWinds cyberattack are engaged in a fresh campaign to compromise global networks by targeting the tech supply chain, including resellers and providers of cloud technology.
Read more

All adults should get a Covid booster shot, CDC...

“The recent emergence of the Omicron variant further emphasizes the importance of vaccination, boosters and prevention efforts needed to protect against Covid-19,” CDC Director Rochelle Walensky said in a statement.
Read more

The Centers for Disease Control and Prevention are investigating two deaths from a rare bacterial disease only found in tropical climates.The CDC ...
Read more

Twitter has announced a slew of new features since the beginning of this year.
Read more

White House Chief of Staff Ron Klain appears to have rekindled his Twitter love affair with Washington Post columnist Jennifer Rubin just as he was forming another with one of her own colleagues.
Read more

US diplomats in Baghdad hit with pay cut, may...

Amid rocket attacks, U.S. diplomats in Baghdad have been hit with pay cut, and may require be forced to pay some money back for personal time off.
Read more

Now that performance information about the M1 Pro has been appearing, it seems that it falls short of dedicated GPUs in gaming workloads.
Read more

Romania’s president told U.S. counterpart Joe Biden that more NATO troops are needed on the alliance’s eastern flank given Russia military maneuvers that feel threatening to many people in the region
Read more

Welcome to Monday’s Overnight Energy & Environment, your source for the latest news focused on energy, the environment and beyond. Subscribe here: thehill.com/newsletter-signup.Today we’re looking at the launch of the COP26 summit and Sen....
Read more

More than 120,000 children in the U.S. lost a primary caregiver during the pandemic, a study released Thursday found, drawing attention to the wider impact COVID-19's spread has had on children.  ...
Read more

Japan’s Suga pledges not to wage war again as...

Japanese Prime Minister Yoshihide Suga pledged on Sunday that the country would not wage war again, making the vow on the anniversary of the end of World War Two as members of his cabinet visited a Read more

Micromax In 1 goes on sale today: check out...

Why the Anthony Bourdain voice cloning creeps people out

The Commission on Race and Ethnic Disparities “stands by” its report on racism claims in the UK, says the equalities minister.
Read more

A sharp rise in COVID-19 infections is threatening to upend the political dynamics around the nation's most pressing issue.
Read more

Critics are slamming the rebuilding of the iconic Notre Dame Cathedral in Paris and accusing the renovators of turning the 850-year-old church into a “woke theme park.”
Read more

Rick Allen is described as a "legend" after his death on K2 in Pakistan, where it is understood he will be buried.
Read more

The Vatican took the rare step of voicing a public objection that a proposed law to criminalize homophobia in Italy would threaten "freedom of thought."
Read more

What Americans should know about inflation as it hits...

Economists break down why consumer prices are so high right now.
Read more

The Associated Press, Al Jazeera and other press advocates condemned the Israeli air strike on Saturday that blew up the building housing them and other media outlets....
Read more

Here are all the winners of the 2021 MTV Movie & TV Awards.
Read more

Honda workers in Swindon to face ‘reality check’ after...

Hospitals in U.S. South Run Low on Oxygen Amid...

Hospitals in the Southeast are running low on oxygen, with the worst-hit left only 12 to 24 hours worth, said Premier Inc., a hospital-supply purchasing group.
Read more

Why Rudy Giuliani’s law suspension is actually a very...

The state’s independent rural drugstores are showing the power of small.
Read more

LSE calls on EU not to be protectionist over...

A father filed a wrongful death lawsuit alleging Seattle city officials acted with "deliberate indifference" to the circumstances that led to his 19-year-old son's death during a Capitol Hill Occupied Protest (CHOP) over...
Read more

Volkswagen AG plans to offer a highly automated version of the hippie-era microbus it’s reviving as an electric van as the carmaker commercializes self-driving technology along with startup Argo AI.
Read more

How Alamo Drafthouse is redefining the cinema experience

If you don't already know about the Alamo Drafthouse cinema chain, it could change your view of going to the movies. Alamo Drafthouse is the brainchild of Tim League, a hardcore film buff since high school. It started small almost 20 years ago in Austin, Texa…
Read more

Hyundai and Kia to launch 6 electric cars in...

Both the brands are expected to introduce their affordable mass-market electric cars in 2024.
Read more

Where is the best place to install my home...

Home security cameras provide a great way to check in on your property but deciding where to locate them may leave you feeling confused. Here’s everything you need to consider.
Read more

In-person voter turnout in Germany’s federal election stood at 36.5% at 2 p.m. on Sunday, trailing the participation rate recorded four years ago. In 2017, 41.4% of eligible voters had cast their vote at the same time.
Read more

R. Kelly: The history of allegations against him

The US singer has been found guilty of eight counts of sex trafficking and one of racketeering.
Read more

The FDA’s meeting on Covid-19 boosters may not provide...

The US Food and Drug Administration is meeting Friday about Covid-19 vaccine boosters, but the long-awaited discussion may not yield an answer as to whether all vaccinated Americans will get a third dose, experts said.
Read more

Opportunity knocks for Serena Williams on the grass courts of Wimbledon next week when she faces a diminished field on her best surface at the famous All England Club.
Read more