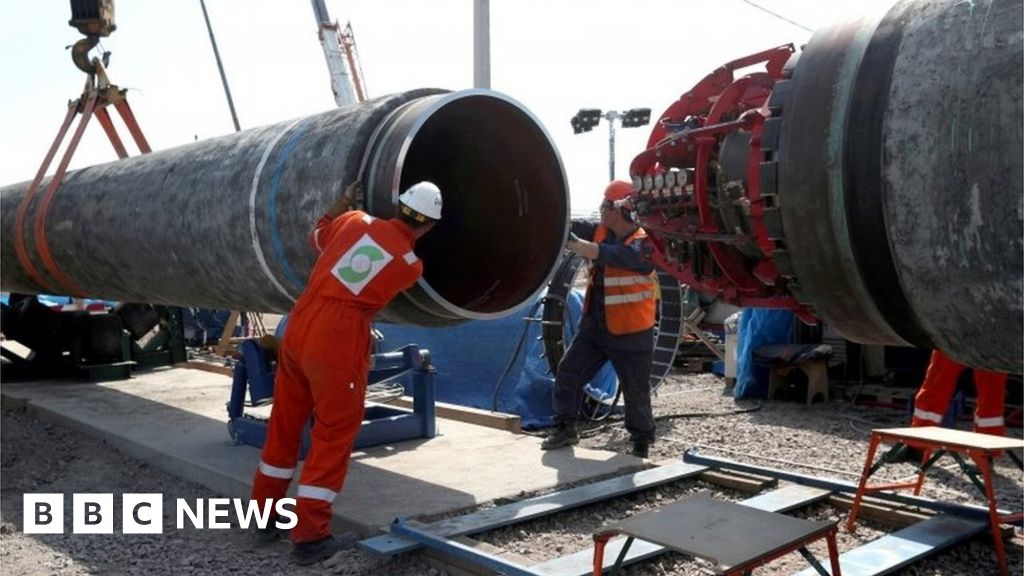 Two British men and a Moroccan who were captured while fighting for Ukraine have been sentenced to death by a Russian proxy court in eastern Ukraine.

Russian state media says Aiden Aslin, Shaun Pinner and Saaudun Brahim were charged with being mercenaries, the violent seizure of power and undergoing training to carry out terrorist activities.

The Britons’ families have insisted they are long-serving members of the Ukrainian military and not mercenaries.

The court, which is not internationally recognised, is in the pro-Russian so-called Donetsk People’s Republic.

The men’s lawyer said they all wished to appeal against the sentence, Russia’s Tass news agency reports.

Ukraine’s foreign ministry has said all the men were “servicemen” of the armed forces of Ukraine and should have the rights of prisoners of war.

The UK government says it is “deeply concerned” with the sentences and is continuing to work with Ukraine to secure both British men’s release.

Image caption, President Zelensky says the fate of Severodonetsk could decide the fate of the Donbas region

Intense street fighting has continued in the eastern Ukrainian city of Severodonetsk, with a Ukrainian commander saying the battle is being waged house to house.

On Wednesday President Volodymyr Zelensky said the fate of his country’s eastern Donbas region may be decided in the battle.

Our maps show how the battle in the east and elsewhere has progressed.

And on Thursday Petro Kuzyk, commander of the Svoboda [Freedom] National Guard battalion said soldiers were hoping for a delivery of heavy weapons that might “turn the tide”.

He added street fighting in the small industrial eastern city was at times raging under heavy Russian artillery barrages, endangering troops on both sides, Reuters reported.

A senior adviser to Mr Zelensky says Ukrainian military casualties are now between 100 and 200 a day – the highest estimated total to have been made public so far – and echoed the call for more weapons.

Russian President Vladimir Putin says the West will not be able to cut itself off from Russian oil and gas for several years.

He added that nobody knows what might happen in that time, so Russian companies would not be “concreting over their oil-wells”.

In comes as a US official admitted that Russia may be making more profit from energy now than it did before the war.

The EU has pledged to reduce its dependency on Russian oil by 90% by the end of 2022.

However, the bloc also buys about 40% of its gas from Russia and has not yet made any similar commitments on Russian gas.

The US has placed an embargo on all Russian energy products.

But rising energy prices mean that Russian profits from energy are likely to have risen, despite a reduction in the overall supply.

There’s more on whether the world can cope without Russia’s energy supplies here.

Image caption, There were shows of support for Ukraine across Premier League games last season

The Premier League has suspended its £43m six-year deal with Russian broadcaster Match TV following the country’s invasion of Ukraine.

The deal to show top flight English football matches was due to begin at the start of the 2022-23 season – an earlier deal was suspended in March after the invasion.

The 20 clubs in the league were informed at Thursday’s annual general meeting that the decision had already been taken to suspend the contract.

You can read more here. Online or on-campus: Weighing the pros and cons for...

How to Watch Ons Jabeur vs. Tatjana Maria at...

All-party groups: Foreign influence could be next scandal, MPs...

Video of Trump Saying ‘We Have to Keep Our...

Kilmeade roasts Biden for remarks on inflation, recession: How...

Clyburn on Supreme Court pick: ‘I don’t believe in...

‘I Saw White People as the Enemy, Then One...

Stop-and-search: How being stopped by police can affect mental...

Sacramento’s next class of Democrats

Flamingo that escaped Kansas zoo in 2005 spotted in...

President Zelenskyy on what NATO and the US should...

Hisense Laser TVs got a Dolby Vision upgrade. Other...

Flaw in the VA Medical Records Platform May Put...

Videos show moments a driver lost control of a...