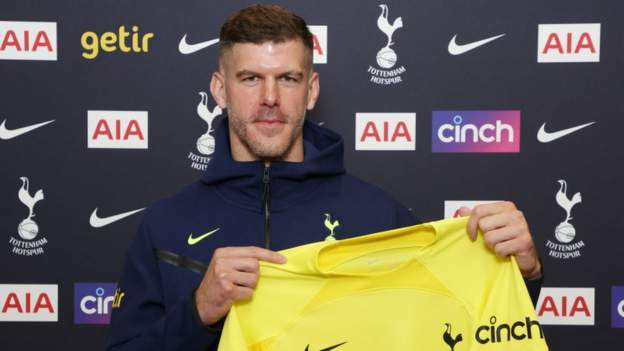 Tottenham have confirmed the signing of England goalkeeper Fraser Forster on a free transfer.

The 34-year-old was expected to join Spurs once his contract at Southampton expired and has signed a two-year deal.

He made 19 Premier League appearances last season and will replace Pierluigi Gollini as back-up to regular starter Hugo Lloris at Spurs.

Forster, who has six England caps, made 162 appearances for Saints after a move from Celtic for about £10m in 2014.

Although Forster’s last international appearance was in 2016, he returned to the squad this March after Sam Johnstone and Aaron Ramsdale withdrew.

A product of the Newcastle academy, Forster had loan spells with Stockport County, Bristol Rovers, Norwich City and Celtic before making a permanent move to Parkhead in 2012.

He returned to Celtic on loan for the 2019-20 season, during which he won the Scottish Premiership for a fourth time. Man charged over death of cyclist on A85

Relatives of POWs call on Red Cross to help...

Swiss on Track to Endorse Welfare Reform in Vote,...

Experts: Central U.S. needs to be ready for next...

Texas dads arrested after getting vocal at school board...

Amazon’s iRobot Deal Would Give It Maps Inside Millions...

Novak Djokovic: The twists and turns of his Australia...

Gene-edited tomatoes could soon be sold in England

Cheney: Use of chemical weapons by Russia should be...

‘We got our miracle’: Freed Americans back home in...

Bank of Canada Set to Deliver Another Jumbo Hike:...

ECB Is Pushing Banks to Scrutinize Their Energy-Intensive Risks

Russian Prisoners Offered Freedom If They Join Fight Against...