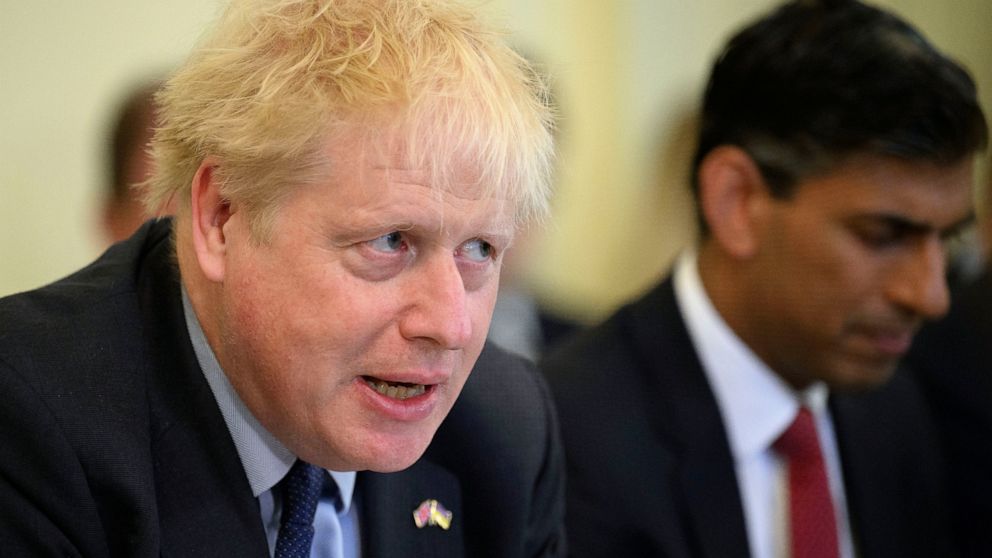 LONDON — With British Prime Minister Boris Johnson dealt a heavy blow after surviving a no-confidence vote from his own Conservative Party, questions already are being asked about who might succeed him if he was forced from office.

Conservative lawmakers voted 211-148 to keep Johnson as leader Monday following revelations that he and his staff held Downing Street parties that broke Britain’s COVID-19 lockdown rules. But the scale of the revolt was considered more damaging than expected.

Although the leadership rules give Johnson a years respite from another such vote, he faces other risks.

Party rebels could change the rules to force an early vote; he could be seen as a political liability if Conservatives lose special elections this month; he could be forced out if an ethics committee finds he lied to Parliament over the partygate scandal; or he could simply get fed up and quit.

That would trigger a leadership contest to choose his replacement. While there is no single front-runner, here is a look at some possible contenders:

Truss, 46, took on the high-profile Cabinet post in September after serving as trade minister. She has been gaining momentum as a contender since then and has made no secret of her ambitions.

As Britain’s chief diplomat in the Ukraine crisis, Truss got a frosty reception from her Russian counterpart, Sergey Lavrov, prior to Moscow’s Feb. 24 invasion.

She is also the U.K.s lead negotiator with the European Union on lingering issues following Britains exit from the bloc. Once a campaigner for remaining in the EU, Truss has become a Brexit champion. Her former role as international trade secretary saw her signing post-Brexit deals around the world and channeling Johnsons ambitions for Global Britain.

Truss is popular with many Conservatives, who see echoes of the partys first female prime minister, Margaret Thatcher, in the the free-market-loving politician. Truss’ supporters have coined the slogan, In Liz We Truss.

Until recently, Sunak was widely regarded as the party’s brightest rising star, the best-known of the contenders and the bookies favorite to succeed Johnson.

Sunak, 42, was thrust into the spotlight when he became treasury chief in 2020, tasked with the unenviable job of steering the economy through its worst economic slump on record because of the pandemic. He dished out billions of pounds in emergency spending to help businesses and workers, and his policies have generally been seen in a positive light.

But partygate changed those fortunes. Like Johnson, he was issued a police fine for attending a lockdown-flouting birthday party at Downing Street in June 2020. He also came under heavy criticism for being slow to respond to Britain’s severe cost-of-living crisis.

Sunak also faced pressure following revelations that his wife, Akshata Murthy, avoided paying U.K. taxes on her overseas income, and that the former investment banker held on to his U.S. green card while serving in government.

If he succeeds, he would be Britains first prime minister of color. Born to Indian parents who moved to the U.K. from East Africa, Sunak attended the exclusive Winchester College private school and studied at Oxford.

Some see his elite education and past work for the investment bank Goldman Sachs and a hedge fund as a deficit because he seems out of touch with ordinary voters.

Hunt, a former health secretary and foreign secretary, ran against Johnson in the 2019 leadership race, billing himself as the more serious candidate. He lost heavily, and was dumped from the Cabinet when Johnson took over.

He has openly said he wouldn’t back Johnson, warning that keeping him in power would wreck the partys chances in the next general election.

He is widely expected to make a new bid for the party leadership. In a January interview, the 55-year-old was quoted as saying that his ambition to lead the country hasn’t completely vanished.

Hunt has remained a lawmaker, and kept himself in the public eye by grilling ministers and experts as head of Parliament’s Health and Social Care Select Committee.

As a critic of the governments response to the pandemic, he may appeal to those seeking a change from Johnson, although some look on him unfavorably for implementing unpopular policies as health secretary.

Wallace has won admirers for his straight talk, particularly among Conservative lawmakers who pressed for the U.K. to increase its defense spending.

A 52-year-old army veteran, Wallace has raised his profile considerably as a key government voice in Britains response to Russias invasion of Ukraine.

Tugendhat, 48, is a non-Cabinet Conservative being mentioned as a possible leadership contender. Although he has no ministerial experience, Tugendhat reportedly is favored by some in the party as a good choice for a new start.

An opponent of the 2016 Brexit referendum, the former soldier has been a trenchant critic of Johnson. He is also among a group of key Conservatives urging the U.K. to take a tougher stance on China.

Zahawi, 55, came to prominence as vaccines minister during the pandemic and was credited with playing a key part in the successful rollout of the COVID-19 shot.

A co-founder of the market research firm YouGov, Zahawi was elected as lawmaker in 2010. He was born in Iraq to a Kurdish family and came to the U.K. as a child when his parents fled Iraq under Saddam Hussein’s rule.

He is seen by some as a safe choice if other candidates such as Truss prove too divisive.

Javid, 52, has been health secretary since June 2021, leading Britains COVID-19 response. Before that, he served as treasury chief, but resigned in early 2020 after clashing with Johnson over his order to fire his team of advisers.

The fact that Johnson brought him back into the government to handle the coronavirus response reflects his reputation for competence.

The son of Pakistani immigrants, Javid has billed himself as a common-man alternative to his private school-educated rivals although he had a lucrative career in investment banking before entering politics.

Gove, a party heavyweight, has held many key Cabinet posts and currently is in charge of delivering on the governments promise to level up Britain to address inequality by increasing opportunities in deprived areas.

Gove, 54, played a key role in the Brexit campaign and is widely respected in the party, but is not completely trusted. In the 2016 Conservative leadership campaign, he backed Johnson for leader before deciding to run himself a betrayal that many Conservatives haven’t forgotten.

Mordaunt, 49, has emerged as a surprise potential contender, with supporters saying she could help heal the party’s divisions.

Mordaunt played a prominent role in the pro-Brexit campaign and had backed Hunt in the 2019 leadership contest. She was removed as defense secretary as soon as Johnson became prime minister.

She has since returned to government as international trade minister and is popular among Conservative lawmakers.

The next Star Wars RPG has been delayed

A Georgia solar factory shows the promise — and...

Will the Elizabeth Line Improve Your Journey Across London?

Shepard Smith to fill in for Lester Holt on...

Does your boss really care what you think?

Biden to propose minimum tax on billionaires as part...

Judge to decide if Scott Peterson victim of jury...

U.S. Beef Prices Are Set to Rise Further as...

Norwich City 2-0 Burnley: We still believe we can...

3 arrested in mysterious deaths of 21 teenagers at...

Woman who ran over and killed boyfriend in Fife...

Ex-NYPD officer guilty of assaulting police officer at US...

S Carolina push to be 49th state with hate...

Court rules Australian minister has no climate duty of...

NRA Slammed Over Tweet In Wake of Buffalo Mass...

China reinstates COVID-19 restrictions amid a rise in infections

Warren Buffett is having the last laugh

How Democrats Can Kneecap the Supreme Court’s Next Attack...

Jaguars fans dress as clowns in hopes of convincing...