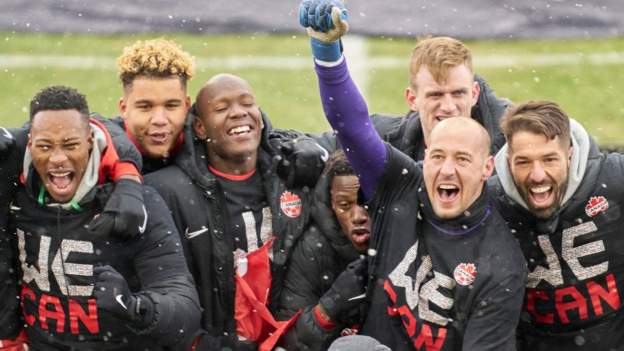 The Canada men’s national team have resumed training but have said “questions have yet to be answered” in their dispute over prize money.

In a letter released on Monday,external-link

they said they met with leaders of the country’s football association but “we have not reached an agreement”.

It added that both parties “will continue the negotiation process”.

posted shortly after on social media, Canada Soccer said there were “future meetings scheduled toward a resolution”.

The players’ strike forced a friendly with Panama in Vancouver to be called off.

Canada have qualified for the 2022 World Cup, only the second time they have reached the men’s finals having previously played in 1986.

There were conflicting reports around the percentage of prize money the players have been offered by Canada Soccer.

that national team players had been offered about 10% of the total amount the country would get from Fifa, set to be at least $10 million (£8m).

On Saturday, Canada Soccer told TSN its offer was 60% to be split equally between players on the men’s and women’s teams, with the players requesting 75-100%.

The men’s team is still scheduled to play Curacao in a Nations League match in Vancouver on Thursday.

Artificial intelligence was supposed to transform health care. It...

Pound slides to two-year low against the dollar

A brief guide to the next Ways and Means...

If you’re a bootstrapped startup, turn to user-centered design...

Lyft Plans to Lay Off Hundreds of Staffers

US midterms: Millions of Americans to vote with Congress...

Time Out lists the world’s best cities for 2022

Russian convoy closing in on Kyiv after missile strikes...

UK heatwave: Parents urged to keep children out of...

UK Closes In On 300 Million Climate Package for...

Bidenworld: We won the Covid pandemic battle, lost the...

The fast-growing list of companies that no longer want...

Lacoste Snaps Back at M&S in Lawsuit Over Crocodile...

Thousands protest in support of public health care in...

‘Person of interest’ in Oklahoma bicyclist slayings arrested in...

Biden’s declaration that Putin ‘cannot remain in power’ was...

Surfshark and Nord Security merge to create VPN and...

Reform candidates lead in UAW races with 56% of...

Why is Scottish independence back in the spotlight?

Mindy Kaling to be honored by Producers Guild for...

Most of Ghana’s Pension Trustees Risk Collapse on Debt...

Apple is the world’s biggest smartphone seller once again

Man arrested in Georgia confesses to murdering 5 in...

2023 will be the year of cyber-risk quantification