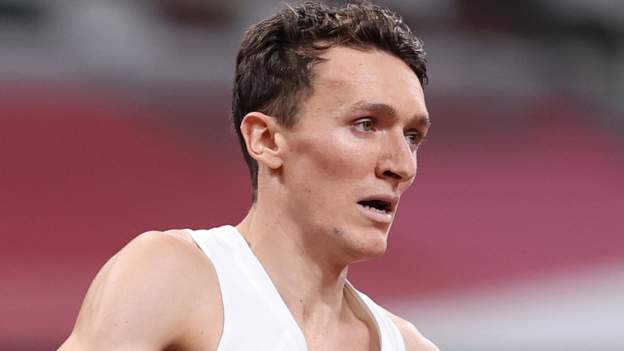 Jake Wightman led a British one-two in the men’s 1500m in the Diamond League meeting in Rabat, Morocco.

Wightman ran clear of compatriot and fellow Olympic finalist Jake Heyward with around 200m to go.

Olympic champion Elaine Thompson-Herah cruised to victory in the women’s 100m, while Karsten Warholm was injured in the men’s 400m hurdles.

Norway’s Olympic gold medallist clipped the first barrier before pulling up with a hamstring problem.

The 26-year-old Warholm, who set an incredible world record of 45.94 seconds at Tokyo 2020, will be hoping the injury will not prevent him from competing at next month’s World Championships in the United States.

“I am very disappointed for this injury,” he said. “I think it’s a hamstring tear, I will focus on treating it and come back stronger.”

With Warholm having crashed out, American Khallifah Rosser claimed victory in the race with a time of 48.25secs.

“I feel amazing about the race,” said the 29-year-old, who is hoping to add an individual world championship title to her collection of Olympic golds.

“This is my third time in Rabat and I’m super excited about the new meeting record. For the next event in Rome I’m following the same process and keeping up the same pace.”

Britain’s Amy-Eloise Markovc was denied victory in the women’s 3000m as Kenya’s Mercy Cherono claimed first place by three hundredths of a second.

Markovc moved to the front as she entered the final lap before Cherono edged her out on the home straight.

Elsewhere, Olympic silver medallist Kenny Bednarek recovered from the disappointment of finishing eighth in the men’s 100m in Eugene last week with victory in the 200m.

The Diamond League moves to Italy on Thursday for the fifth meeting of the season in Rome, while the World Championships take place in Eugene between July 14-25. UK slaps new sanctions on Russia as invasion of...

Damjanovic looks to add to scoring record as end...

Bannon Agreeing to Jan. 6 Testimony a ‘Gimmick’ and...

Guatemala leader won’t attend summit in LA after US...

Nextbike resumes in Cardiff after vandalism and thefts

Ikea may have just made the perfect Bluetooth speaker...

Passengers advised to fly with just one bag

Oxford Biomedica Sales to Fall on Vaccine Pause: The...

Exeter City had ‘KFC and Subway’ before Carlisle United...

Man dies in hospital after crash in Ardrossan

Psaki: Schools can open safely ‘including in Chicago’