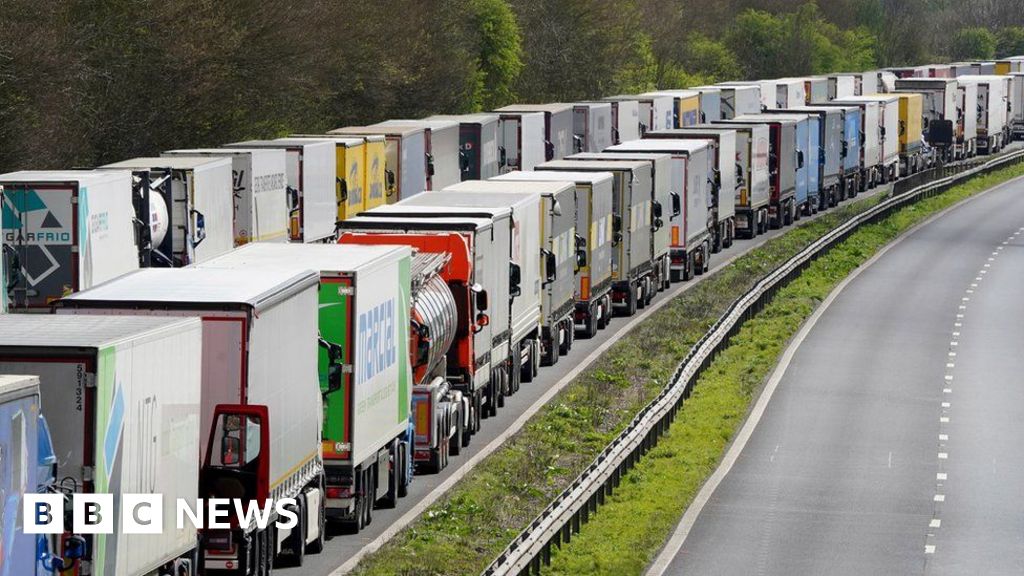 A traffic-holding system for lorries planning to cross the English Channel will be lifted after the Queen’s Platinum Jubilee celebrations.

The Kent Resilience Forum (KRF) said the move would allow it to resume work relocating a contraflow barrier.

The traffic scheme was introduced in March to manage freight flow after P&O Ferries services were suspended.

KRF strategic lead Simon Jones said it promised to keep it under review and it was now safe to remove it.

The measures, known as Operation Brock, queue lorries heading to Dover on one side of the M20, while a contraflow system runs on the remaining carriageway.

Mr Jones said: “KRF partners promised our residents, businesses and hauliers we would… remove it as soon as it was practical to do so.

“With the half-term and Jubilee holidays now coming to an end we are able to safely deliver on our pledge.”

Work will now resume to move the contraflow between Junctions 8 (Maidstone) and 9 (Ashford), from the hard shoulder to the central reservation.

The barrier relocation works, which include a 13-mile long drainage upgrade for the central reservation and new signage, will continue at least until early 2023, KRF said.

During this time, a 50mph speed limit will stay in place on both carriageways.

“Moving the structure to the central reservation will allow the hard shoulder between Ashford and Maidstone to be reinstated to its original width.” World leaders focus on how to punish Russia over...

Carolyn Hax: Surprise! Pregnancy delights her, but rattles her...

Background Checks for Gun Purchases Spiked in Texas After...

Despite layoffs, there’s still a talent crunch in Southeast...

EXPLAINER: Why is Hungary blocking sanctions on Russian oil?

Could Kadarius Toney be New York Giants’ X-factor in...

Politico claims slower wage growth could be ‘a good...

Iran says it’s ready for new talks with US...

‘He showcased his brilliance’: Nets react to Cam Thomas’...

Gabbard’s message to CPAC: Can’t we all just get...

Report: Mexico continued to use spyware against activists

Alienware’s Concept Nyx is like a Plex server for...

Chromecast with Google TV is on sale for $40...

Megyn Kelly Wants to Know: Why Should I Pay...

Dollar stands tall as focus swings back to Fed...

Three Dem lawmakers test positive for COVID-19 ahead of...

Paid verification update and other chaos at Twitter is...

Meta sued for alleged role in extremist-linked murder of...

Ready to Die? Why Most People Flunk the Zelenskyy...

Ranking the QBs the Titans will face in 2022

“It’s been a complete reinvention”: Jimmie Johnson on transitioning...

Biden hails killing of al-Zawahri: ‘This terrorist leader is...

In pictures: Celebrating the Platinum Jubilee in Scotland