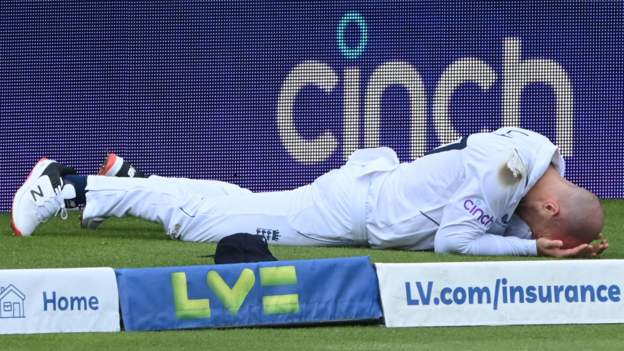 England spinner Jack Leach has been withdrawn from the first Test against New Zealand at Lord’s after suffering symptoms of concussion.

The 30-year-old took a heavy fall while chasing a ball to the boundary in the sixth over of the first day.

England can name a concussion replacement, but there is no other spinner in the squad, so a substitute will have to be called up.

Slow left-armer Leach was playing in his first home Test since 2019.

Fielding at point, he chased an edge from Devon Conway off the bowling of Stuart Broad to the third man boundary.

In stopping the ball from reaching the rope, Leach landed awkwardly and received treatment from the medical staff of both teams.

He left the field immediately and was confirmed to be suffering symptoms of concussion after being assessed.

The Somerset bowler has previously suffered concussions – once when he fainted at home and hit his head on a sink and another when he was struck on the head while batting by former South Africa pace bowler Morne Morkel.

Replacements must be like-for-like, so England have to replace Leach with another frontline spinner.

Fears grow for Ukraine nuke plant ahead of inspector...

How HBO’s Rivalry With Netflix Defined the Streaming Era

Ukrainian businessman moves from the boardfroom to the battlefield...

Von Miller talks about his championship mentality and why...

The Hype Machine That Turned Minions Into a $4B...

Marnie Schulenburg of ‘As the World Turns,’ ‘One Life...

Japan’s Yen Takes a Beating in a Global Market...

North Aurora woman scammed out of $230K accused of...

Misophonia: Why some people are averse to chewing and...

As demand for the monkeypox vaccine stalls, outreach goes...

YouTube will show personal stories of patients in search...

Katie Britt and Mo Brooks will advance to Republican...

Examining the future of social media amid Twitter’s upheaval

Why Did They Hate The Magnificent Ambersons?

Lawrence Shankland: Heart of Midlothian close to deal for...

Russia Moves S-300 Missiles From Syria Toward Ukraine Amid...

The Brain Has a ‘Low-Power Mode’ That Blunts Our...

Ex-UK pilots in China did not share classified information...

Democrats struggle to shore up key line of abortion...

Man charged with rape of girl, 10, who traveled...

London LTNs: Pollution and traffic down in surrounding areas,...

Regeneron Buys Cancer Drug From Sanofi for Up to $1.1 Billion