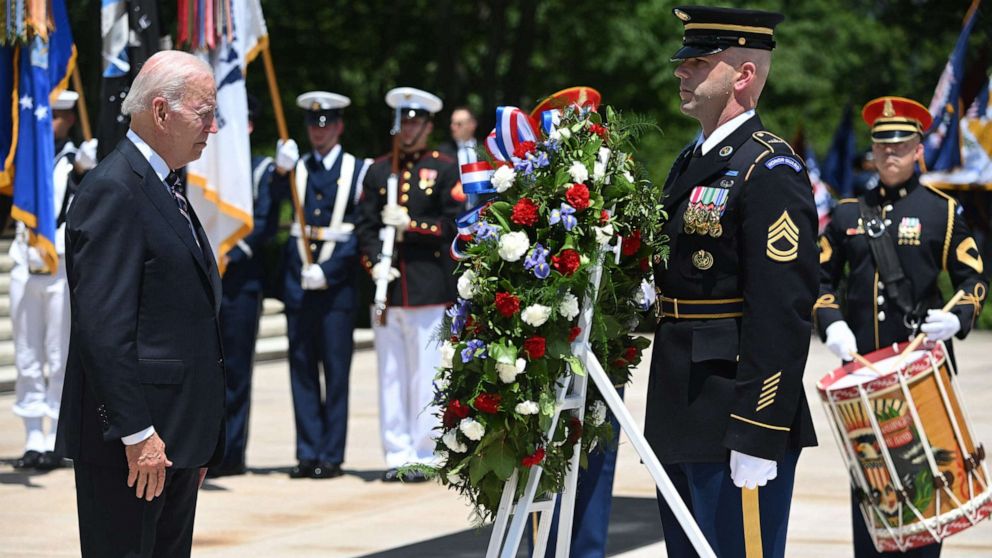 President Joe Biden headed to Arlington National Cemetery on Memorial Day to take part in the traditional wreath-laying at the Tomb of the Unknown Soldier, along with first lady Jill Biden and Vice President Kamala Harris.

After laying the wreath, Biden saluted and then made the sign of the cross as a bugler played taps, the lonely call floating in the late-spring air.

He was then set to speak at the Arlington’s amphitheater as the nation observes the 154th Memorial Day.

Monday’s observance comes after the Bidens spent an emotional day Sunday mourning the victims of the school shooting in Uvalde, Texas.

After arriving from Delaware Monday morning, Biden and the first lady held what has become another Memorial Day tradition: a White House breakfast for Gold Star families.

They’ll plant a magnolia tree in honor of those who lost their lives in service to the nation.

Memorial Day was originally know as Decoration Day, designated in 1868 after the Civil War to decorate the graves of soldiers.

According to the cemetery’s website, members of the 3rd U.S. Infantry Regiment — known as “The Old Guard” — decorate the graves with small American flags on the Thursday before Memorial Day, known as the “Flags in” ceremony.

In the space of a few hours, Old Guard service members plant flags in front of approximately 280,000 headstones and the bottom of about 7,000 niche (for cremated remains) rows — a tradition since 1948.

The Tomb of the Unknown Soldier was dedicated in 1921 after four unknown Americans were exhumed from cemeteries in France following World War I.

The remains of Americans killed in World War II, the Korean War and the Vietnam war were added in the years after.

Soldiers from the regiment — known as Sentinels — keep solemn watch at the Tomb all day and night, 365 days a year, in any weather.

What the election results mean for K Street

Post-pandemic, Telemedicine startups are evolving — this just one...

‘After a week of profound change, our unsettled kingdom...

Water rebates for some customers after £150m fines for...

Creatives will benefit from this top graphics card, if...

Bomb Cyclone Could Bury NYC in a Foot of...

High energy bills could last for two years according...

Hogan says “no question” there are signs of authoritarianism...

Halo TV show to stream exclusively in the MENA...

Affirmative Action for the Poor

How does sharing news on social media affect us?

Celtics or Warriors: Who wins Game 6 of the...

Tesla inks deal to get key battery component outside...

South Dakota signals the end of an era on...

First of ‘hundreds’ of Iranian drones arrives in Russia

DeviantArt provides a way for artists to opt out...

Gorbachev to be buried in low-key funeral snubbed by...

Contrary to Woke Culture: Christianity NOT A White Man’s...

NHS: Dentist check-ups in Wales cut to once a...

How to Know If Your Partner Is Controlling and...

Faisal Islam: Emergency Bank move will not solve the...

Spotify is testing a new car mode focused on...

Opinion | In Defense of Lindsey Graham

Death toll from Brazil floods at least 91, with dozens lost