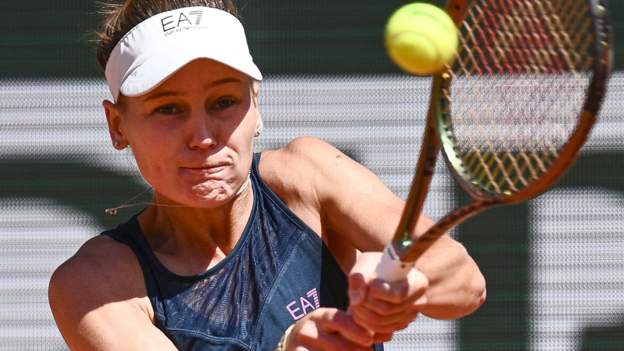 Veronika Kudermetova came from behind to defeat Madison Keys and set up a French Open quarter-final against fellow Russian Daria Kasatkina.

Kasatkina won 6-2 6-2 against Italy’s 28th seed to reach her first quarter-final at Roland Garros since 2018.

The 25-year-old has been in ruthless form at Roland Garros and is yet to lose a set after four matches.

Compatriot Kudermetova, who beat injured third seed Paula Badosa in the previous round, recorded another fine victory in Paris as she battled back to overcome 2017 US Open finalist Keys on Court Philippe Chatrier.

But an early break of serve was enough for Kudermetova to level the contest before the Russian secured victory in style with four successive breaks in the third. Georgia woman wanted after shooting teen in face during...

Congress should pass the ‘Fourth Amendment Is Not For...

Nothing Phone (1): everything we know so far

Ukraine: The children’s camp that became an execution ground

No new large-screen Apple iMac is planned, inside sources...

RingCentral reckons it has cracked the whole webinar goldmine

In more ways than one, Fed’s Powell showed his...

Cybercriminals have found a cunning new way to evade...

The U.S. recorded the highest number of rabies deaths...

Man accidentally sets self on fire aboard bus in...

Dubai says planned coal-fired power plant to instead use...

Man charged in death of co-worker at Michigan GM...

S&P futures near record high in bright start to...

Meal frequency and portion size: What to know

Oura has made a gold-laced Gucci smart ring, and it's ludicrously expensive