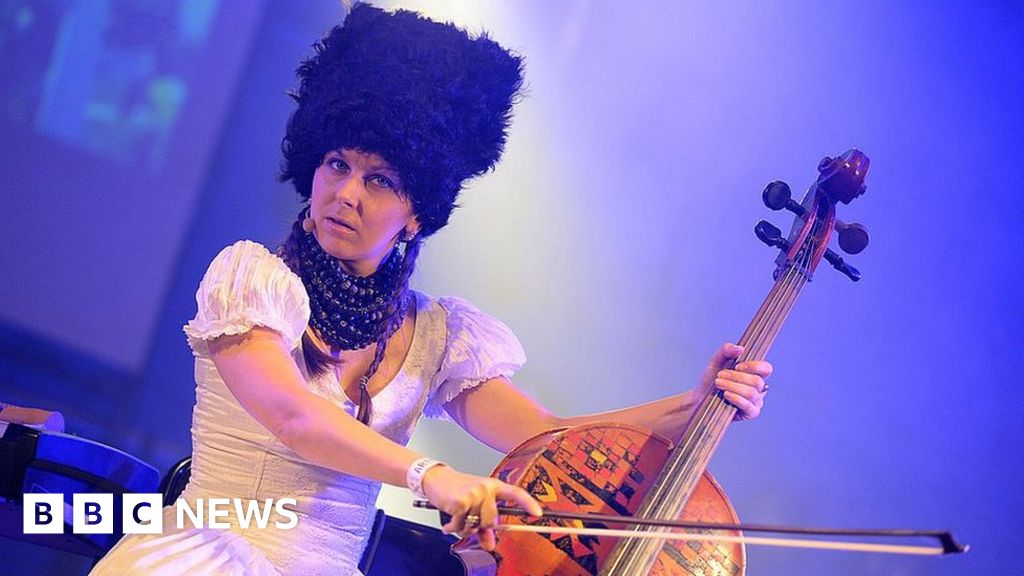 Image caption, Dakha Brakha have played at Glastonbury before

The band will play the festival’s main stage on Sunday morning, shortly before Diana Ross makes her festival debut.

For years, the band have called themselves “ambassadors of free Ukraine” and punctuated concerts with cries of “Stop Putin!” and “No war!”

They are currently donating proceeds from their shows to the Ukrainian army.

The quartet were one of several acts added to the Glastonbury line-up, as the festival revealed its full programme for 2022.

On the festival’s second-biggest stage, The Other Stage, Pet Shop Boys, Megan Thee Stallion and Foals will top the bill.

Suzanne Vega, who headlined the festival in 1989 wearing a bullet-proof vest after receiving a death threat, will return in more peaceful circumstances with a slot in the Acoustic tent.

Other returning favourites include Primal Scream, who headline the John Peel tent on Friday and Jessie Ware, who is Saturday’s main attraction on the Park Stage.

And Ukraine’s 2020 Eurovision act Go_A will also play the festival on Saturday 25 June, when they open proceedings on the John Peel Stage.

The festival has pledged to achieve a 50/50 gender balance, but only 36% of the acts on the five main stages are female. Bands with mixed line-ups account for 14% of the performers, with male artists making up the remaining 50%.

This year’s Glastonbury will be the first since 2019, after two years of Covid-enforced cancellations.

It will see 200,000 fans return to Worthy Farm in Somerset, for five days of music, comedy, politics and theatre.

The organisers have also announced a new collaboration with London’s Notting Hill Carnival, which will take place in the infamous Block9 area of the festival.

The carnival will be given a “home base” in the Block9 East field, from where they will organise processions across the festival site, featuring acts including The Mangrove Steelband.

The line-ups for the main stages are as follows:

The complete line-up is available on the official Glastonbury website. Eagles’ weakness exposed in loss … will other teams...

VW to Drive Past Tesla; No Euro-Dollar Complacency –...

Ukraine pleads with Congress for more aid and weapons

Disney-Peltz Showdown Is a Throwback to the Corporate Raider...

Cruise, loaded with another $1.35B from Softbank, opens up...

Biden administration to ramp up testing supply to schools...

A Winter of Strikes Threatens to Ruin Britain’s Christmas...

The leader of AMD remains optimistic after a $1...

Should NATO Admit Sweden and Finland?

MLB Odds: Lines on Aaron Judge’s next team, from...

Michigan votes to protect abortion rights in reflection of...

This brutal hacking tool could steal virtually all of...

Sister of jailed hunger striker says she has appealed...

Ukraine ports have shipped around 4.7 mln tonnes of...

Who Is Huma Abedin? Meet The Woman Linked to...

Nigeria – where President Buhari had to say sorry...

Don’t trust averages: How to assess and strengthen the...

Elon Musk is auctioning off the soul of old...

Aid groups: Biden’s $33B for Ukraine skimps on humanitarian...

Why MPB is the best one-stop-shop for all your...

‘Metal Slug Tactics’ is delayed until 2023

Giants hoping to join Vikings in postseason. First they...

6 shot during funeral service at church

INDIA RUPEE Rupee likely to inch up on upbeat...

A MAGA Lament and Hope For the Future

BeReal gets its own Saturday Night Live skit

Ten-Year-Old Shot Dead While Alone With Young Relative in...

TikTok star inspires millions to learn how to forage...

Intel’s plans for a $20B chipmaking hub in Ohio...

Mila Kunis and Ashton Kutcher to match up to...