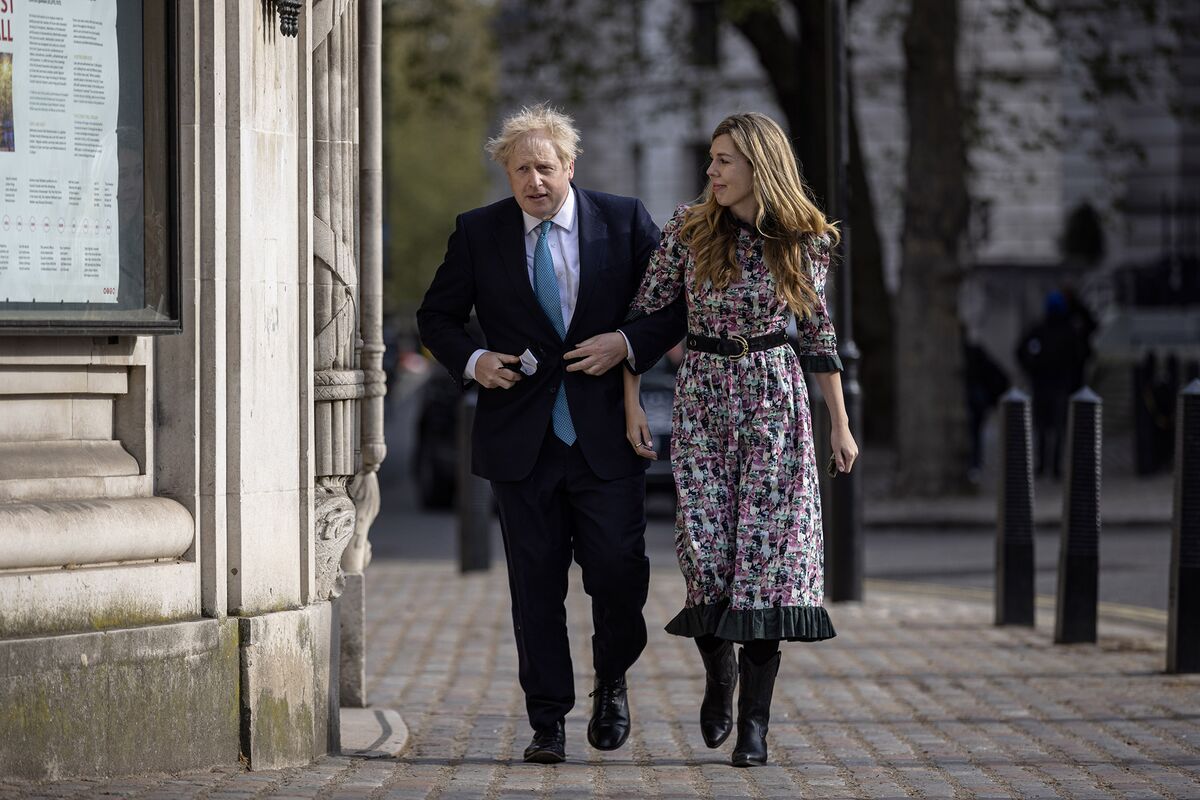 British Prime Minister Boris Johnson married his fiancee Carrie Symonds in a secret ceremony in Westminster Cathedral on Saturday, according to reports by the Sun and Mail on Sunday.

Downing Street declined to comment on the reports to Press Association and other newspapers.

announced the birth of his son with Symonds, 33. They were the first unmarried couple officially to live together in Downing Street when he became prime minister. Johnson has been married twice before.

Asked whether he was planning a wedding, Johnson told The Sun in March that the wedding industry is certainly going to come roaring back, in common with many other sectors of the economy. The Thin Veneer of Civilization

This week, Will talks about the influence of social media on COVID-19 vaccinations, the growing culture of crime and Juneteenth.
Read more

The Premier League is planning a social media blackout next month in response to continued online abuse of players.
Read more

World Cup 2026: Are USA building towards success on...

With a thriving system producing players for various Champions League teams, the US look set to be a threat in the 2026 World Cup they will co-host.
Read more

Democrats may have *too* much of a good thing...

The oldest rule of politics goes like this: You can't beat someone with no one. As in, no matter how weak a candidate one party fields, the other party must find a credible alternative if it wants to unseat the incumbent.
Read more

With Nicholas Wu. Its Fiscal New Years Eve! Congress will be celebrating as they often do: By racing against the midnight deadline to...
Read more

The House Republican's replacement proposal for the Affordable Care Act is being slammed as "Obamacare-lite" by the Republican PAC Club For Growth. CBS News congressional correspondent Nancy Cordes reports on what's next.
Read more

A unanimous three-judge panel in a federal appeals court upheld a lower-court ruling that North Carolina's ban on abortion after 20 weeks is unconstitutional, a blow to abortion opponents in one of many such cases currently percolating through federal courts.
Read more

American diver David Boudia, who is a hero of Tyler Downs, finished one spot out of Olympic qualifying.
Read more

The U.S. passed the milestone of administering more than 300 million vaccine doses. New cases and deaths continue to plunge and are back to the levels just after U.S. states began imposing restrictions in March 2020.
Read more

Congress needs to address the mounting economic and consumer safety threats posed by the silk road of counterfeits coming from China.
Read more

"We hope the DPRK and the U.S. can meet each other halfway, earnestly accommodate each other's legitimate concerns on the basis of mutual respect and promote the political settlement of the Peninsula issue," Chinese Foreign Ministry spokesperson Zhao Lijian s…
Read more

Greece opened for tourism on Saturday after coronavirus lockdowns burdened the country for months.Famous archaeological sites and museums along with travel between islands are open a...
Read more

Police Scotland made 20 arrests and seized drugs as part of a UK-wide crackdown on illegal activity.
Read more

Tokyo Olympics: Where are Team GB’s English medallists from?

With day 11 of the competition over, the North West currently leads the way when it comes to medals.
Read more

An assistant House Sergeant at Arms was arrested and charged in a child pornography case, police in Fairfax County, Virginia said.
Read more

Reasonable scoring not for everyone at Royal St. George’s

Phil Mickelson must have walked off Royal St. George's and wondered what hit him.
Read more

Doctors are increasingly turning to antibody drugs in a bid to keep hospitals from being overwhelmed by a surge of COVID-19 cases, a turnabout after months in which the treatments went mostly unused.
Read more

Largest wildfire in U.S. larger than size of NYC,...

Officials believe the Bootleg Fire in Oregon won't be fully contained until the end of November.
Read more

The following is a transcript of an interview with Secretary of State Antony Blinken that aired Sunday, June 6, 2021, on "Face the Nation."
Read more

Stocks are flat despite drop in consumer sentiment figures

Stocks were little changed in early trading Friday, as gains for communications and health care companies are checked by weakness in energy and other sectors
Read more

At least 140 positive Covid-19 cases have been detected among players, members of delegations and service providers since the beginning of the Copa America tournament in Brazil on June 13, according to the country's health ministry.
Read more

Google: US technology giant to invest $740m in Australia

The firm says it will create 6,000 jobs as it builds a research hub and expands its cloud capacity.
Read more

A man was arrested for arson in connection with the Clayton fire in California. Fire crews are scrambling to contain the wildfire that has now burned more than 4,000 acres. CBS News correspondent Mireya Villareal joins CBSN with more.
Read more

Key Democrats are pushing back against progressives who are criticizing the treatment of Palestinians by the Israeli government in the face of what some lawmakers worry could become President Biden’s first foreign policy crisis.
Read more

The popular Knott’s Berry Farm theme park in Southern California was being evacuated Saturday night in response to an incident at the park’s Supreme Scream ride, according to reports.
Read more

Lev Parnas and Andrey Kukushkin have each pleaded not guilty.
Read more

Robert Aaron Long, 22, was indicted on murder charges in the March 16 killing of eight people, six of them women of Asian descent, in the Atlanta area.
Read more

People who have recovered from a COVID-19 infection are likely to be protected from reinfection for at least six months, but according to a study published Wednesday, that protection drops dramatically for people over the age of 65.The study, which...
Read more

In the 1980s first lady Nancy Reagan launched the idea of selling White House Christmas ornaments. But then the White House Historical Association started honoring each president, sequentially, beginning with a dove copied from the weather vane at George Wash…
Read more

China hits back at US criticism of Hong Kong...

Turkey has eased nearly all pandemic restrictions on businesses and events, and lifted nighttime and Sunday curfews amid a drop in new infections
Read more

Matteo Berrettini withdraws from the ATP Finals after failing to recover from an abdominal injury that forced him to retire from his opening match.
Read more

Shots were fired outside the NSA headquarters as an SUV was stopped at the entrance to the Fort Meade campus.
Read more

Lissie Harper says she will not allow her Harper's Law campaign to be 'kicked into the long grass'.
Read more

Driving tests resume but getting a date like ‘gold...

Most centres are currently booked up until August, with a 420,000 backlog because of the pandemic.
Read more

In his weekly address, President Obama highlighted the progress the U.S. economy is making and emphasized the need to help women and working families more.
Read more

"We should not allow the US-Taiwan relations to break through because they will get bolder and intensify their provocation in the future," the Global Times' editorial board wrote Sunday.
Read more

Yang in new book: Trump might have won in...

Andrew Yang, most recently a former New York City mayoral candidate, says in his new book that former President Trump could have won the 2020 "if not for the coronavirus, which had killed 230,000 Americans by the ti...
Read more

The lawyer was convicted last year on charges that he tried to extort up to $25 million from the sportswear giant.
Read more

Jury selection for the trial of the three defendants continued into its second week of questioning with slow progress.
Read more

Erik Prince offering to fly people out of Kabul...

Erik Prince, the founder and former CEO of the security contractor previously known as Blackwater, is reportedly offering to fly people out of Kabul for $6,500 each as the evacuation effort in Afghanist...
Read more

A California state assemblyman is proposing a privately-funded grant program to help parents who have been forced to pay out-of-pocket expenses to keep up with their children's remote learning.Ke...
Read more

With Heather Caygle and Sarah Ferris. KICKING AND DEEMING Nothing was solved while you were sleeping.Talks between top House Democrats and the leader of...
Read more

Keith Gowers placed a pillowcase over the head of his victim before repeatedly punching her.
Read more

In India, growing clamour to criminalise rape within marriage

An Indian court ruled that forced sex with a spouse is not rape. Campaigners say it's time for new laws.
Read more

Hong Kong has suspended schools, stock market trading and government services as a typhoon passes to the south
Read more

A new type of health test uses DNA to give nutritional advice. People are spending hundreds of dollars to map out their genetic profile with a saliva test. There are several tests on the market, but critics say it is difficult to know how accurate they are. M…
Read more

ScotRail and the Scottish government have given the RMT until 17:00 on Wednesday to accept their offer.
Read more

A survey suggests 15% of us are using an easily-guessed dog's or cat's name as a password.
Read more

Windows 10 will soon tell you whether your PC...

As we’ve seen, even if your PC isn’t compatible with Windows 11, you can still install the OS – but it really isn’t recommended.
Read more

The U.S. Securities and Exchange Commission has a blunt message for investors in mutual funds that have holdings in Bitcoin futures: Beware of the risks.
Read more

Scottish Premiership: What was the best top-flight goal in...

What was the best Scottish Premiership goal in September?
Read more

By citing a public health law, U.S. officials at the southern border have been able to expel migrants to Mexico or their home countries without allowing them to apply for humanitarian refuge.
Read more