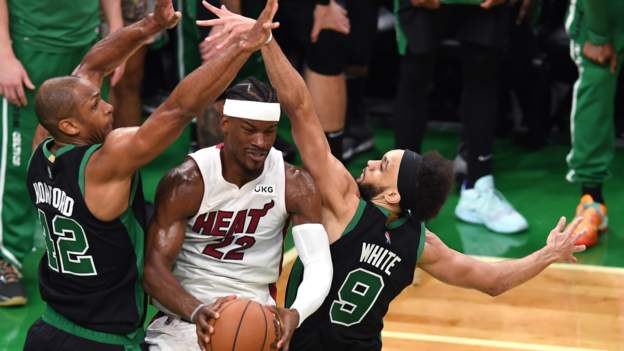 Jimmy Butler, who has been in the NBA All-Star team six times, joined Miami Heat in 2019

The winner-takes-all tie is in Miami in the early hours of Monday (01:30 BST).

With two minutes left the game was 99-99 before Butler’s three-pointer and three P.J. Tucker free throws allowed Heat to control the closing stages.

“We know what we’re capable of. We get to take it back to the crib and win game seven,” Butler said.

“We knew we were going to come here and get one. We know we’re going to win this next one too.”

The winner will face the Golden State Warriors, who defeated Dallas Mavericks in the Western Conference finals, in the NBA Finals that begin on Thursday in San Francisco.

Butler, who had only scored 27 points over the previous three games, added: “My team… my coaches got so much belief in me. They give me that confidence to just go out there and play basketball the right way and just hoop.”

He made 16 of his 29 field-goal attempts – including four of eight three-pointers – and all 11 free-throw attempts as he produced his second 40-point game of the series and fourth of the play-offs.

The 32-year-old battled through a sore right knee and thanked a message from former Miami star guard Dwyane Wade for inspiring him.

“He was telling me I could do this,” Butler said. “He said ‘go out there and continue to build your legacy’ and it meant the world to me.”

Heat coach Erik Spoelstra added: “Jimmy just brought his competitive will tonight. It was a will that would not let us lose.”

Kyle Lowry recorded 18 points and 10 assists before fouling out for the Heat, while Max Strus added 13 points and P.J. Tucker 11.

Celtics coach Ime Udoka said “sloppy basketball at both ends” was the reason behind the defeat, while reserve White said they were “frustrated” but “everybody is motivated to get on that plane and go down there and get the win”.

The Heat, who last won the NBA crown in 2013, are seeking a second finals in three years, having lost to Los Angeles Lakers in 2020, while the Celtics are looking for their first success since 2008 and finals since 2010.

4 tigers rescued from Argentina get new home in...

The nine-year-old growing up in a circus

Inflation still sucks, but we’ll take whatever relief we...

NFL: Washington football team to become Commanders from next...

Valero Texas Open: Richard Bland in contention as he...

‘It’s going to be a great day for Liberal...

How Russia Has Revived Fears of Nuclear War in...

Covid: Care home restrictions to be eased in England

Climate Change Is Taking a Big Bite out of...

Firefighters are gaining ground in the fight to protect...

Will These Algorithms Save You From Quantum Threats?