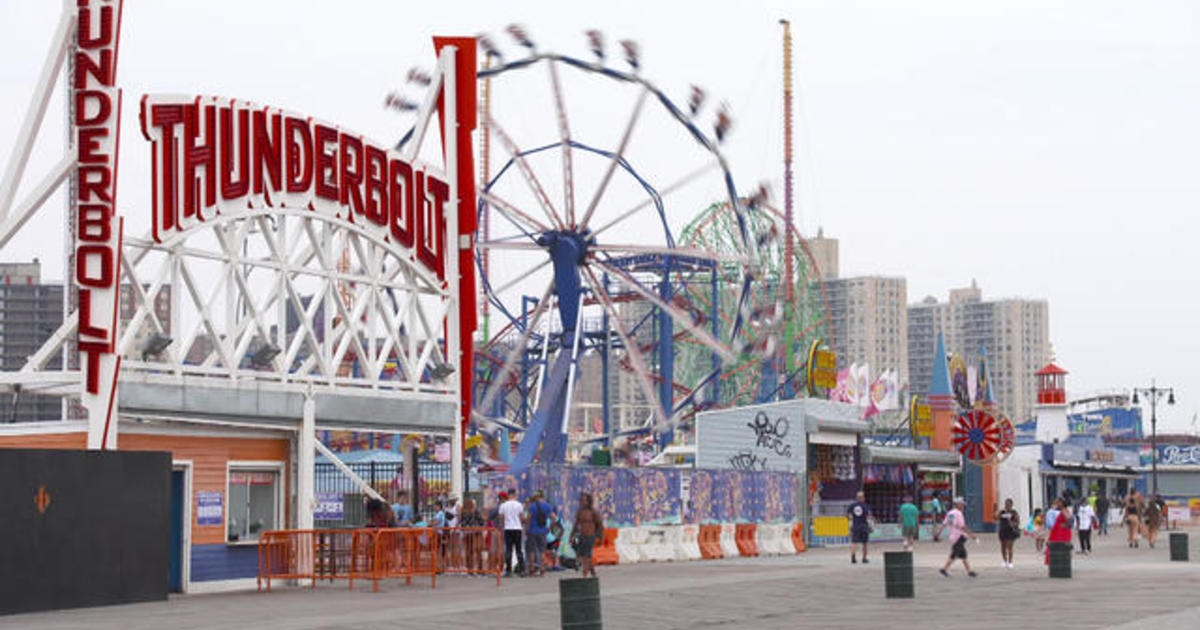 NEW YORK — It was a stormy start to the Memorial Day weekend.

This year, many events are returning at full capacity for the first time since the pandemic started. On Friday, CBS2’s Thalia Perez went to Coney Island, where people were celebrating the unofficial start to summer.

Gloomy, wet weather didn’t dampen spirits as visitors kicked off the holiday weekend on the boardwalk.

“We went and got the Nathan’s hot dog and I thought a Coney Dog was a chili cheese dog and I was wrong. It’s just a regular hot dog,” said Terrill Petersen of Seattle.

“There’s just so much in New York to do — touristy stuff, breweries,” Travis Petersen added.

READ MORE: Despite cancellation of rehearsals, Bethpage Air Show pilots ready to “tear up the skies” over Jones Beach this weekend

“We decided to come down and go to the museum tomorrow and a show tomorrow night and it’s nice to see some of the stuff that’s still here, historically,” he said.

Meanwhile, businesses along the boardwalk spent Friday prepping for the first Memorial Day weekend since the pandemic began without any restrictions in place. Maya Miller, who owns the Brooklyn Beach Shop, said she is eager to welcome back visitors and anxious to see the size of the crowds return to normal.

“This year, I can tell you, it has already started to be a very big season. So, considering the weather that we are having, I think it’s going to be huge,” Miller said.

“It feels like you’re flying, like they spin you in circles and everything. It feels very nice. You feel the wind in your face,” said Andy Casquet of Sunset Park.

Alessandro Zamperla, president and CEO of Central Amusement International, Inc., said it will be all hands on deck this holiday weekend.

“We know that this is the time when people are coming out going to enjoy themselves. The rides. The food. The entertainment. The music,” Zamperla said.

And there is something else to look forward to. New York City beaches will officially open on Saturday and that means the lifeguards will be on duty.

The chip shortage is now even affecting printer ink...

Seoul: No evidence slain official tried to defect to...

WhatsApp boosts security to keep your chats safer than...

In Honor of Women’s History Month: ‘Celebrate HER Story’...

Job openings flat in January after hitting record in...

Nuclear power: What role can it play in the...

Video of Russian Tank Blowing Up in Ukraine Captured...

US and Russia hold talks amid Ukraine tensions

Stop Saying Student Debt Relief Is for the Rich

UN envoy Angelina Jolie in Yemen ahead of fundraising...

Obstacle racing to be tested as equestrian replacement in...

43 injured as tourist bus veers off road in...

A look into the history of the Zamboni machine

An Iraqi court sentences a British citizen to 15...

Hideo Kojima fans are already trying to cancel his...

Dinosaur footprints found on beach in Wales may be...

Living with COVID: Experts divided on UK plan as...

First Scots to appear on Gogglebox in six years

Internet Stunned by Man Who Says Brother & Mom Are 'Like a...

Uvalde students' reported 911 calls should have prompted a 'Charge of the...