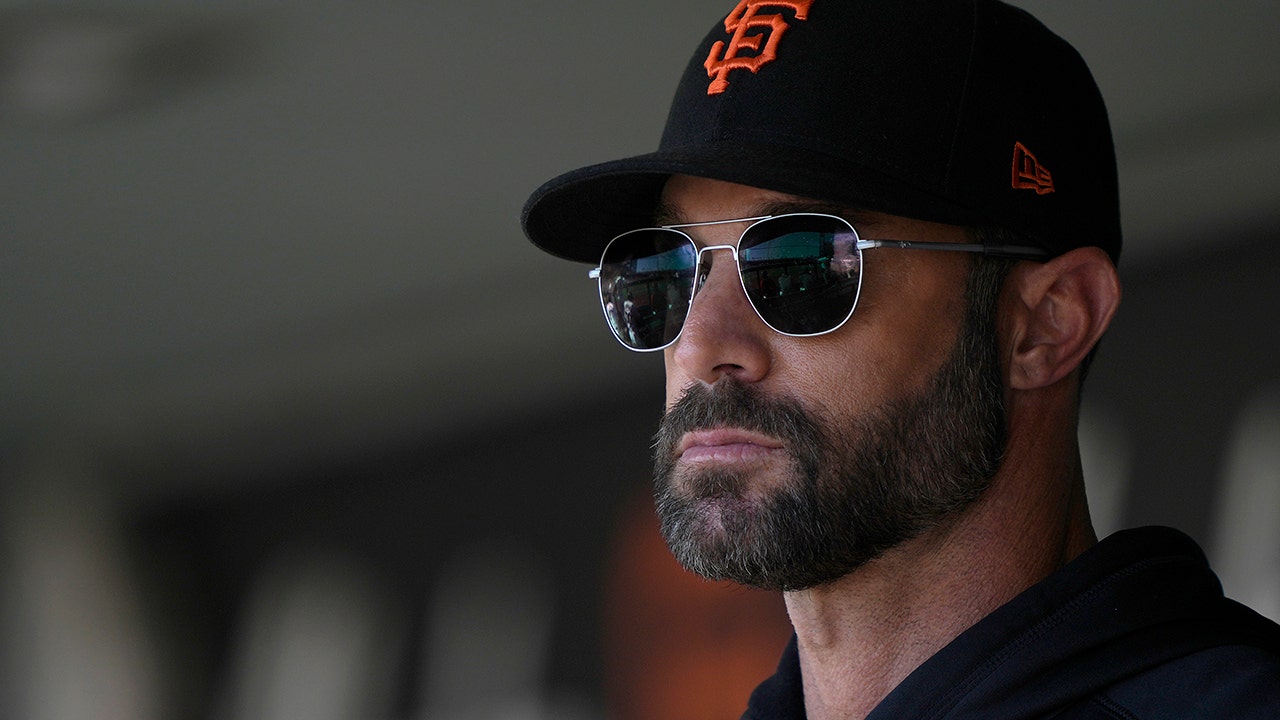 until he “feels better about the direction of our country” in the wake of the Texas school shooting on Tuesday that left 19 students and two teachers dead.

to explain his choice not to participate in the national anthem, a decision he first revealed in a lengthy blog post earlier in the day.

Manager Gabe Kapler of the San Francisco Giants looks on from the dugout during a game against the Atlanta Braves at Oracle Park Sept. 19, 2021, in San Francisco.

“I dont plan on coming out for the anthem going forward until I feel better about the direction of our country,” he told reporters. “Thatll be the step. I dont expect it to move the needle necessarily. Its just something I feel strongly enough about to take that step.”

posted to his lifestyle website in which he expressed remorse for standing for the anthem during Wednesdays game against the New York Mets considering the tragic events of the previous day.

“I wish I hadnt let my discomfort compromise my integrity,” Kapler said. “I wish that I could have demonstrated what I learned from my dad, that when youre dissatisfied with your country, you let it be known through protest. The home of the brave should encourage this.

In the post, “Home of the brave?,” Kapler said his father told him “to stand for the Pledge of Allegiance when I believed my country was representing its people well or to protest and stay seated when it wasnt. I dont believe it is representing us well right now.”

Manager Gabe Kapler of the San Francisco Giants looks on from the dugout against the Miami Marlins at Oracle Park April 9, 2022, in San Francisco.

Kapler took aim at the “police officers who had weapons and who receive nearly 40% of the citys funding” and the lawmakers whose response to the shooting was “we needed locked doors and armed teachers.”

“Im often struck before our games by the lack of delivery of the promise of what our national anthem represents,” Kapler added. “We stand in honor of a country where we elect representatives to serve us, to thoughtfully consider and enact legislation that protects the interests of all the people in this country and to move this country forward towards the vision of the shining city on the hill.’

“But instead, we thoughtlessly link our moment of silence and grief with the equally thoughtless display of celebration for a country that refuses to take up the concept of controlling the sale of weapons used nearly exclusively for the mass slaughter of human beings. We have our moment (over and over), and then we move on without demanding real change from the people we empower to make these changes. We stand, we bow our heads, and the people in power leave on recess, celebrating their own patriotism at every turn.”

, when he joined several of his players in taking a knee to protest racial injustice and police brutality.

Manager Gabe Kapler, right, of the San Francisco Giants, kneels during the playing of the National Anthem prior to a game against the Texas Rangers at Oracle Park Aug. 1, 2020, in San Francisco. US allows NATO allies to send American-made weapons to...

When Mavis Staples and Levon Helm met for some...

Dyson is building super-secret robots, including a ‘robot brain’

Worry about stagflation, a flashback to ’70s, begins to...

Factbox: How PBOC might respond to China’s weakening yuan...

Why the Belarus Railways Hack Marks a First for...

The Points Guy Files Motion to Dismiss in American...

Hannity to Palin: ‘We need fighters like you’ in...

Abortion issue belongs ‘in the hands of the people,...