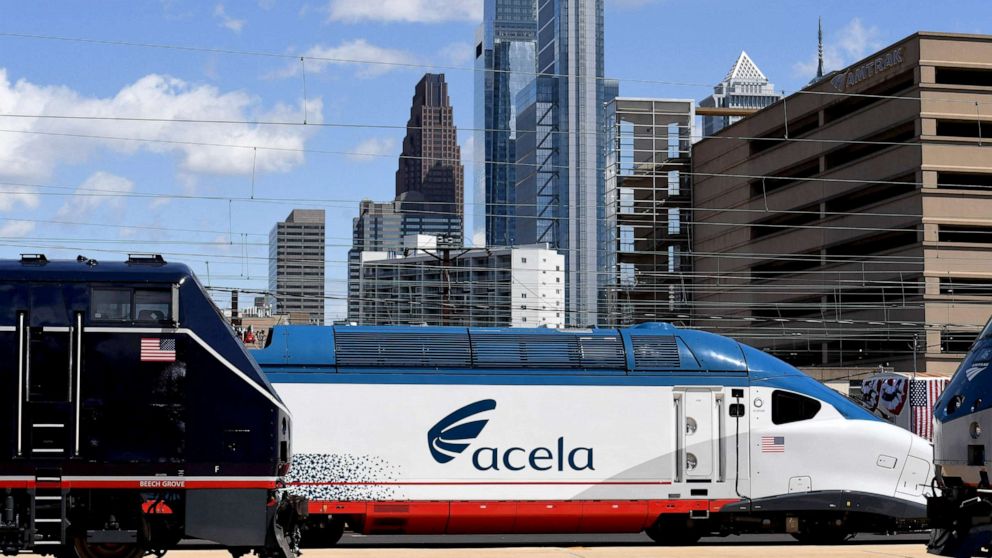 Amtrak could be coming to a city near you.

The company released its Amtrak Corridor Vision Thursday, detailing its 15-year proposal to use federal money to introduce 39 new routes to its network and add service to 160 new communities.

“Now is the time to invest in our countrys infrastructure and future,” Bill Flynn, the companys CEO, said. “New and improved rail service has the ability to change how our country moves and provides cleaner air, less traffic and a more connected country.”

The plan calls for a $75 billion federal investment — the total cost of the project — to grow rail service across the United States. It also looks to improve service on 25 existing routes. Amtrak said the plan has “the potential to expand or improve rail service for 20 million additional passengers each year.”

Amtrak is also looking to improve service in cities like Houston, Atlanta and Cincinnati, which are currently underserved by trains.

Republicans released their counteroffer to the president’s updated proposal Thursday and it would allocate a fraction of that — $46 billion — to passenger and freight rail. World Cup qualifiers: Alexander-Arnold back in England squad as...

Trent-Alexander Arnold has been named in England's 2022 World Cup qualifiers squad after missing Euro 2020 with a thigh injury.
Read more

Some high school seniors who applied early to college are already hearing back. And one school in Louisiana is celebrating two students who were accepted to Ivy League schools. Watch the reactions to the acceptances here.
Read more

Opponents of capital punishment are expressing frustration with the Biden administration's request this week that the Supreme Court reinstate the death penalty against Boston Marathon bomber Dzhokhar Tsarnaev.
Read more

No substantial Covid-19 outbreaks were reported among any of the nine pilot events -- including the Brit Awards and the FA Cup soccer final -- included in the first phase of a government study into whether large crowds can safely gather again.
Read more

Former President Trump's advisers are encouraging him to make a pro-vaccine PSA amid signs Republican voters are wary of getting a vaccine shot, ...
Read more

NATO Secretary-General Jens Stoltenberg said over the weekend that members of the alliance are looking to put behind them past disagreements and acrimony that took place during former President Trump's time leading the Un...
Read more

Biden’s name will not appear on stimulus checks, White...

White House press secretary Jen Psaki said Tuesday that President Biden's name will not appear on stimulus checks that will be sent to many Americans after the $1.9 trillion coronavirus relief bill is passed.The de...
Read more

Tom Brady caused a stir this week when he called out one team for passing on him during free agency, but the full context of his remarks revealed that he wasn’t interested in the organization to begin with.
Read more

After a man drove his car into a police vehicle on the Champs-Elysees, authorities are looking into who was the attempted attacker. CBS News' Elaine Cobbe reports from Paris.
Read more

Motherwell scored a stoppage-time equaliser to claim a point at Tannadice and retain seventh place in the Scottish Premiership.
Read more

Owners Slammed for Carrying Dogs Around in Clear Suitcases...

Similar clear suitcase designs, featuring dogs and cats, are being sold online for as much as $206.31.
Read more

Friday’s decision is the latest action in back-and-forth court battle that has spanned weeks as schools in Florida reopened for the fall.
Read more

How to watch Munguia vs Szeremeta: live stream title...

The WBO Intercontinental middleweight title is on the line in Texas. Here's your guide to getting a Jaime Munguia vs Kamil Szeremeta live stream, plus time and full card details.
Read more

Are the homeless being targeted in Atlanta?

Two homeless men were shot in their sleep, three days apart. Police say the killer likely didn't know who the men were at the time of the murders. 48 Hours Crimesider reporter Michelle Sigona joins CBSN with more on the search for a suspect who is apparently …
Read more

A 9-year-old girl who shaved her head, in support of her friend's chemotherapy, despite school policy banning this action, has been allowed to return to classes following a meeting of the school board. KREX's Travis Khachatoorian reports.
Read more

Blair has ‘no sympathy’ for people who refuse vaccine

A Massachusetts jury has sentenced Dzhokhar Tsarnaev to the death penalty for his role in the 2013 Boston Marathon bombing. CBS Evening News anchor Scott Pelley reports on the long-awaited ruling.
Read more

British Health Secretary Matt Hancock apologized after a photo was leaked of him kissing an aide, which breached the nation's COVID-19 regulation at the time."I accept that I breached the social ...
Read more

Ned Beatty, Oscar-nominated actor best known for his role in the 1972 film "Deliverance," died on Sunday at the age of 83....
Read more

Heartbleed virus: Changing your password may not eliminate risk

Changing your password may not be enough to protect yourself from the Heartbleed virus. Information security experts warn that Heartbleed is bigger than first thought. As Mark Albert reports, there is more you can do to protect your personal information from …
Read more

The British government says three-quarters of the adult U.K. population has received at least one dose of a coronavirus vaccine
Read more

Bucs’ Rob Gronkowski reveals what he misses most about...

Tom Brady says he won’t be “reminiscing” about his time with the New England Patriots when the Tampa Bay Buccaneers make their return to Gillette Stadium on Sunday but Rob Gronkowski is, in a way.
Read more

A French constitutional court ruled in favor of the government requiring COVID-19 health passes for citizens attempting to enter restaurants, bars and other venues.
Read more

Partner of slain Chicago cop moved to rehab after...

The third officer on the scene, Officer Josh Blas, "saved my son in responding the way he did," the father of Carlos Yanez Jr. said.
Read more

There's word that Donald Trump Jr. corresponded with WikiLeaks during -- and after -- the 2016 presidential campaign. Jeff Pegues is following the breaking story.
Read more

Drained by a year of Zoom gatherings and virtual meetings, Democratic activists are starting to cram their calendars with in-person rallies, roundtables and other events to convince Washington leaders their priorities are popular on the ground.In...
Read more

Vaccinated people no longer need to wear a mask, but the WHO warned ending the pandemic can't be achieved without public health measures in place.
Read more

China resumed adding crude oil to inventories in August after four consecutive months of draws, but this was a reflection of weak refinery processing rather than a bullish demand signal.
Read more

Power restored to most of Puerto Rico after fire

Power has been restored to most of Puerto Rico after a transformer fire at an electric company's substation on Thursday left hundreds of thousands without electricity. There are currently still 1...
Read more

Chicago Cubs’ Anthony Rizzo announces he’s not getting the...

For one night, TV comics focus their shows on...

Have you heard the one about climate change
Read more

Boris Johnson’s government faces a high-profile row with the England soccer team over racism, after a Black player accused a senior minister of “stoking the fire” during the just-ended European Championship.
Read more

Several Senate Democrats on Thursday said that they hadn't seen a "framework" for how to pay for their sweeping social spending bill, and appeared to be caught off guard by Majority Leader Charles Schumer's (D-N.Y.) annou...
Read more

Dafydd Thomas, 65, was found dead in Minffordd, in Gwynedd, on Thursday.
Read more

THUNES THORNY DECISION: Senate Minority Whip John Thune is next in line to be the chambers top Republican should Mitch McConnell leave the...
Read more

China cancels Everest climbs over fears of virus from...

At least 7 killed after fire tears through residential...

At least seven people have died and 14 are in a life-threatening condition after a fire broke out in a building in southern Taiwan on Thursday, local media reported.
Read more

The White House has begun making special efforts to reach out to local reporters and reporters with more specific beats, ...
Read more

Virgin's broadband deals are frequently leading the market and its latest offer is no exception.
Read more

Germany Probing Astra Shot After Berlin Stops Use in...

Germany is reassessing AstraZeneca Plc’s Covid-19 vaccine after the capital Berlin suspended its use for people under the age of 60, citing new data on potentially dangerous side effects.
Read more

BBC Sport looks at how the new English football season will cope with Covid-19 testing and contact tracing now that restrictions have been lifted.
Read more

The southbound carriageway of the M11 is closed and emergency services are at the scene.
Read more

Microsoft Teams down: video conferencing not working for users...

Investor groups have asked the U.S. Securities and Exchange Commission for more corporate disclosures on climate change and other environmental, social and governance (ESG) issues while business interests have pushed back, a Reuters review of correspondence p…
Read more

Border Patrol agents are coming across a number of U-Haul trucks and other large vehicles packed with migrants in sweltering heat and deadly conditions as they continue to tackle a spike in migrants trying to enter the U.S. illegally.
Read more

China lands on Mars in latest advance for its...

Biden: Migrants aren’t coming to US ‘because I’m a...

President Biden on Thursday pushed back against claims his "nice guy" approach to immigration is bringing migrants to the southern border, saying economic drivers and seasonal patterns are the main drivers."I'd lik...
Read more

Review: ‘Thunder Force’ is forced and lacking any thunder

Melissa McCarthy and her husband, filmmaker Ben Falcone, have teamed up for a fifth time on the superhero buddy comedy “Thunder Force.”
Read more

As Afghan forces lose ground to the Taliban amid the U.S. withdrawal, Charlie D'Agata got a first-hand look at the fighting inside Afghanistan.
Read more

With Shafali Verma set to open the batting for Birmingham Phoenix, BBC Sport looks at why the Indian teenager is so exciting.
Read more

India captain Virat Kohli says his team are "hurting" after losing the third Test against England but does not see the defeat as a "negative".
Read more

The insurgents have taken 18 of the country’s 34 provincial capitals in recent days.
Read more

For The People Act will empower small donors and increase representation in...