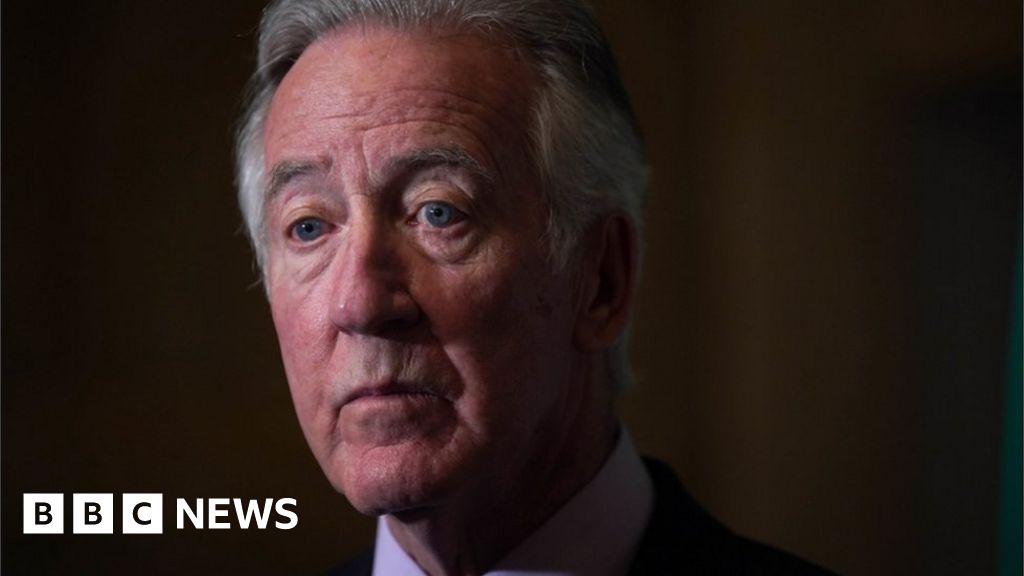 Image caption, Congressman Richard Neal has led a delegation of US politicians to Ireland

A US delegation, led by Congressman Richard Neal, is to meet Stormont’s five main parties at the end of a controversial trip to Ireland on Thursday.

The delegation has held a number of meetings about the row surrounding the Northern Ireland Protocol.

On Tuesday, the congressman said the protocol dispute was “manufactured”.

Unionist politicians have been protesting against the protocol, which was part of the UK government’s Brexit deal with the EU.

Designed to ensure free trade could continue across Ireland’s land border post-Brexit, it has also resulted in additional checks being placed on some goods entering Northern Ireland from Great Britain.

Sir Jeffrey has previously described this as undermining Northern Ireland’s position in the UK.

The DUP has blocked the establishment of the Northern Ireland Assembly and Executive following the assembly election on 5 May.

On Wednesday night, the American delegation was hosted by NI Secretary Brandon Lewis, who said the UK and the US were united in their shared commitment to the Good Friday Agreement.

Image caption, DUP Mayor of Derry Graham Warke asked if the US visitors “could be careful with their words”

Meanwhile, Sir Jeffrey has written to the Ways and Means committee of the US Congress, which Mr Neal chairs, calling his comment about the protocol row being manufactured “outrageous”.

Ulster Unionist Party (UUP) leader Doug Beattie said the remark has made the road ahead harder, while he also took exception to the use of the word “planter” by Mr Neal as derogatory to unionists.

The congressman, who also used the term “Gael” during a visit to Londonderry, said he was using a “historic reference”.

Speaking about the protocol, Mr Neal said people in Northern Ireland had taken up “much more severe challenges”.

“We believe that based on the conversations that we had in Brussels, in London, this is an issue for the European Union and for the UK government to sift and sort,” he added.

On Wednesday, the UK Foreign Secretary Liz Truss, on a visit to County Antrim, said issues with the protocol are “soluble” but cannot be allowed to drift.

Rite Aid’s Insurer Chubb Is Off the Hook for...

Honda shows off its first electric SUV, the Prologue

WHO gets supplies to Ethiopia’s Tigray but distribution lags

Beyond buffets and slots: Casinos double down on fine...

Family pleads for release of Texas father held in...

Fortnite-developer Epic Games and Lego partner to build a...

Jeremy Hunt has no plan for growth, says CBI...

Should the Angels shop Shohei Ohtani?

Meta dismantles a China-based network of fake accounts ahead...

Why did Mark Cuban call the historic Ethereum merge...

Gutfeld asks if airplane mask mandates will ever end

Rat complaints in New York City are so high...

Startups, if your CEO isn’t running your fundraising, you’re...

Vodafone and Three in merger talks

Man dies after setting self on fire at Supreme...

Czechs to let some workers stay on after testing...

Facebook is trying to be Discord with ‘Community Chats’

Dwayne ‘The Rock’ Johnson leaves the door open to...