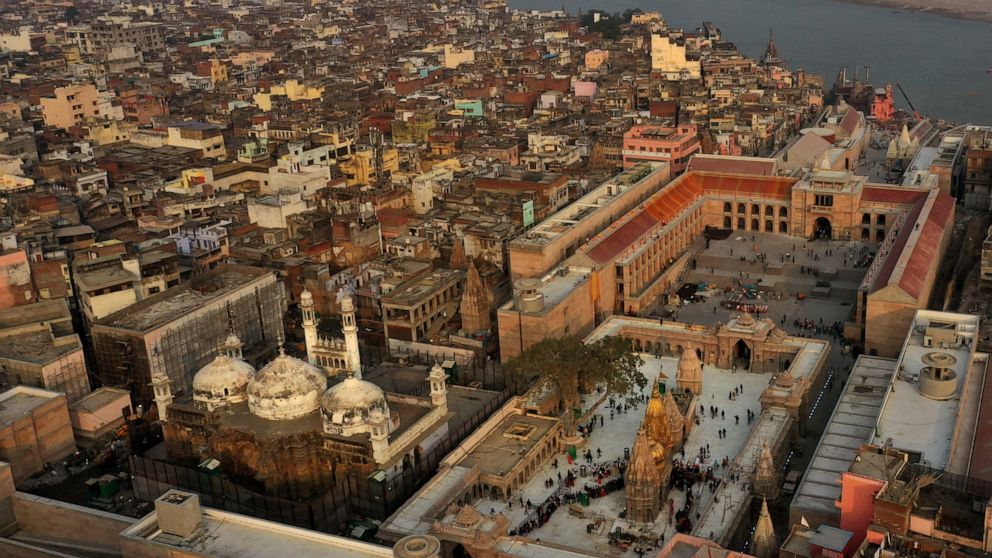 NEW DELHI — For nearly three centuries, Muslims and Hindus in Indias northern Varanasi city have prayed to their gods in a mosque and a temple that are separated by one wall. Many see it as an example of religious coexistence in a country where bouts of deadly communal violence are common.

That coexistence is now under threat due to a controversial court case.

A local court earlier this month began hearing a petition filed by a group of Hindus that seeks access to pray inside the Gyanvapi mosque compound, arguing it was built on top of the ruins of a medieval-era temple that was razed by a Mughal emperor. The petitioners say the complex still houses Hindu idols and motifs, a claim that has been contested by the mosques authorities.

The legal battle is the latest instance of a growing phenomenon in which Hindu groups petition courts demanding land they claim belongs to Hindus. Critics say such cases spark fears over the status of religious places for Indias Muslims, a minority community that has come under attack in recent years by Hindu nationalists who seek to turn officially secular India into an avowedly Hindu nation.

The idea to bombard the courts with so many petitions is to keep the Muslims in check and the communal pot simmering, said Nilanjan Mukhopadhyay, a political analyst and commentator. It is a way to tell Muslims that their public display of faith in India is no more accepted and that the alleged humiliation heaped on them by Muslim rulers of the medieval past should be redressed now.

The court case involving the 17th century Gyanvapi mosque in Varanasi, one of Hinduisms holiest cities, in many ways embodies Indias contemporary religious strife. The widely accepted consensus among historians is that it was built on top of a temple dedicated to the Hindu god Shiva after it was demolished by the Mughal ruler Aurangzeb.

The two communities have in the past stuck to their claims but also made sure the dispute didn’t worsen. That changed last week when a local court in Varanasi ordered the mosque to be surveyed after five Hindu women filed a petition seeking permission to offer prayers there.

A video survey found a stone shaft alleged to be a symbol of Shiva inside a reservoir in the mosque used by Muslim devotees for ablution before offering prayers, according to Hari Shankar Jain, a lawyer representing the Hindu women.

The land on which the mosque is built belongs to Hindus and should be returned to us, Jain said.

Mosque representatives have refuted the claims. Rais Ahmad Ansari, a lawyer for the mosques committee, said the alleged stone shaft found in the reservoir was the base of a fountain.

The discovery of the alleged Hindu symbol led the local court in Varanasi to seal the premises, banning large Muslim gatherings inside. Indias Supreme Court later overturned that judgment and allowed Muslims to pray in the mosque. But it also ordered local authorities to seal off and protect the area where the stone shaft was found, dispossessing Muslims of a portion of the mosque they had used until this month.

The dispute over the mosque and survey has now been taken up by a higher court in Varanasi, with hearings set to continue Thursday.

Lawyers representing the Muslim side have questioned the legal basis for the survey, arguing that it was against the law and a precedent most recently upheld by the Supreme Court in 2019.

Indias Hindu nationalists have long claimed that thousands of medieval-era mosques are built on the sites of prominent temples that were demolished by Mughal rulers. Many historians have said the numbers are exaggerated, arguing that a few dozen temples were indeed razed but largely for political reasons and not religious.

In the late 1980s, Hindu nationalist groups started campaigns to reclaim these mosques. One such campaign culminated in 1992 with the destruction of the 16th century Babri mosque in the northern town of Ayodhya by Hindu mobs.

Hindus believe the site of the mosque was the exact birthplace of their god Ram. Its demolition sparked massive communal violence across India that left more than 2,000 people dead mostly Muslims and catapulted Prime Minister Narendra Modis Bharatiya Janata Party to national prominence.

A grand Hindu temple is now being constructed on the site after Indias Supreme Court handed over the disputed land to Hindus in a controversial 2019 judgement. However, the court assured Muslims that the order would not be used as a precedent or pave the way for more such contentious cases.

The court in its judgment cited the 1991 Places of Worship Act, which forbids the conversion of a place of worship and stipulates that its religious character should be maintained as it existed on August 15, 1947, the day India won its independence from British colonialists.

The act was seen as sacrosanct, that it was there to not reopen old controversies. But allowing a survey is doing exactly that you are scraping at old wounds. This is what it was meant to prohibit,” said Nizam Pasha, a lawyer representing the mosque’s committee.

The Gyanvapi mosque case also fits into a narrative of Modis party, which has long campaigned to reclaim what it calls Indias lost Hindu past. Many party leaders have openly suggested they would take such legal battles head on.

Critics say the party does so by providing support to Hindu nationalist groups that often contest such cases in court. Modi’s party has denied this, saying it cannot stop people from going to the courts.

Pasha, the lawyer, said the filing of such court cases was a very carefully thought out pattern meant to bolster Hindu nationalists.

He said the cases are brought by ordinary Hindu citizens as plaintiffs who say they are devotees of a deity asking for the right to pray at disputed sites. Once the matter goes to court, the Hindu plaintiffs then push for searches of the sites and present evidence that is used to build a media narrative and galvanize the public, he said.

It is very difficult to convince a public then, already influenced by the media, that this is not true, that this is a fountain, Pasha said of the Gyanvapi mosque case.

Last week, a local court accepted a petition to hear a case on the site of another mosque in Uttar Pradeshs Mathura city, located next to a temple, that some Hindus claim is built on the birthplace of the Hindu god Krishna. Similarly, another court in New Delhi heard arguments this week on restoring a temple that Hindu petitioners say existed under a mosque built at the UNESCO World Heritage site, the Qutub Minar. The court said it will deliver a verdict next month.

Many other cases are expected to take years to resolve, but critics say they will help Modis party as it prepares for elections in 2024.

These cases help Hindu nationalists with a groundswell of support for their divisive politics. And thats what they need, said Mukhopadhyay, the political analyst.

Uvalde Police Stopped Husband of Teacher Trying To Save...

Twitter’s suspension of Marjorie Taylor Greene was the right...

Watchdog had prepped notice of delays it faced monitoring...

Nevada county to consider counting all ballots by hand

US Speaker of the House Nancy Pelosi tests positive...

A Vermont ski resort with an ‘insensitive’ name announces...

The best Instant Pot deals at Amazon ahead of...

Fat Leonard’s escape as stunning as his Navy bribery...

Everything We Know About BLACKPINK’s August Comeback

Douglas Ross will not take part in ‘pretend’ independence...

Get ready for even bigger rate hikes from the...

If prices keep rising, a nightmare scenario for the...

Biden’s whereabouts in the week leading up to his...

Iceland volcano was so beautiful, I had a little...