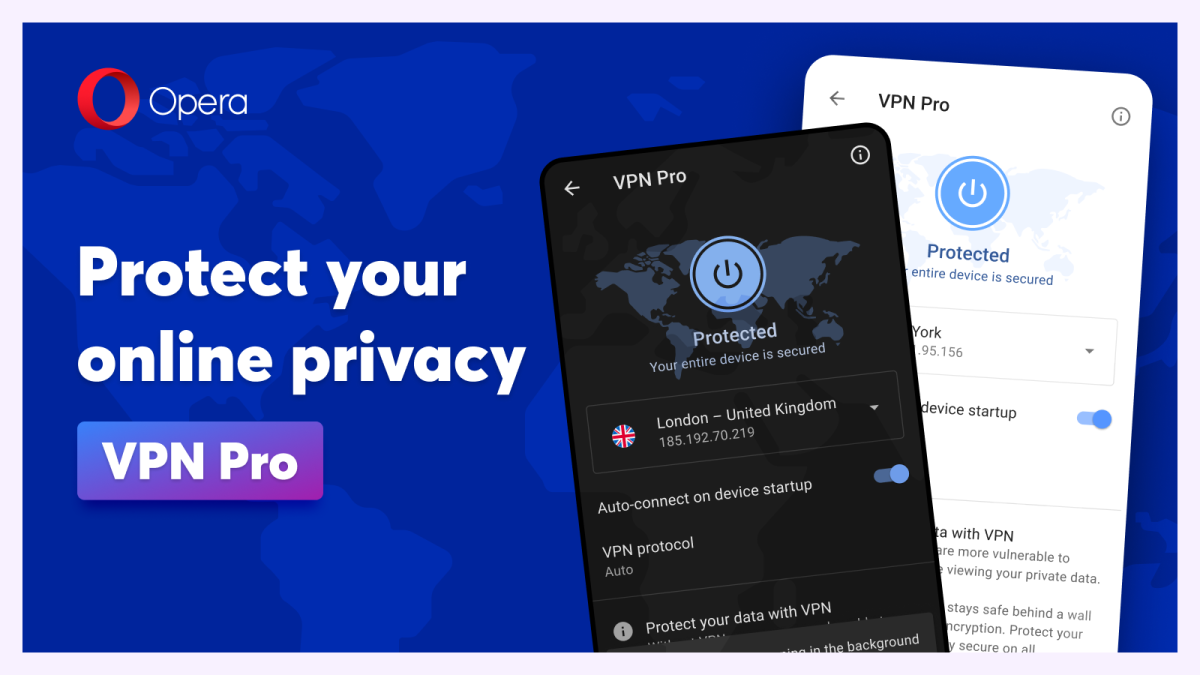 Opera has announced that the premium version of its in-built browserVPN has exited beta testing and is now widely available.

Launched last month, Opera VPN Pro is billed as a device-wide VPN that provides users with additional security and privacy protection for their Android smartphone (opens in new tab).

Although the service comes at a cost, Opera says it can shield up to six Android devices at once and benefits from advanced encryption technologies. New versions for iOS and desktop platforms are also in the works.

After becoming the first major browser to include a free built-in VPN five years ago, Opera is now stepping up the quality of the protections on offer.

Just like the free VPN, Opera VPN Pro is a no-log service (opens in new tab), but it also offers access to more than 3,000 private network servers in over 30 virtual locations worldwide. This allows users to stream videos, download files and browse the web securely when connected to public Wi-Fi (opens in new tab).

Unlike the free version, Opera’s premium VPN shields the entire device (as opposed to just browser activity) and can also be run in a data-saving mode so that users don’t go over the limits of their mobile phone plans.

In normal circumstances, the new service will cost between $1.99/£1.59 and $5.99/£4.89 per month, depending on the duration of the subscription. But for a limited time, it’s available for slightly less.

There is also a seven-day free trial period for new users to test out the service as well as a 30-day money-back guarantee.

“We at Opera have always been focusing on ensuring users’ privacy by constantly introducing free built-in advanced features aimed at protecting users when they are surfing the web.”

“Recently, we were spotting the increasing interest in trusted entire-device protection based on our users’ requests. That’s why launching a trusted VPN Pro solution was a logical further step for Opera.” Millions of Americans head to polls amid concerns over...

US claims major DDoS-for-hire takedown, but some ‘seized’ sites...

The rise of fantasy football and how it changed...

BMF raises an enormous round to 3D-print tiny things...

Ranking the best college basketball coaches so far this...

Russian Authorities Thwart Protests from Wives and Mothers of...

What loss of Ozzie Albies means for Braves in...

Brazil detains hundreds after attacks on Congress and other...

David Walliams’ future as Britain’s Got Talent judge ‘up...

Two types of Suave aerosol deodorant recalled due to...

Dinosaur finding hints at why T-rex had small arms

East Coast braces for another night of dangerous storms...

Y2K aesthetics are so hot right now — and...

Putin: Russia has no plans to use nuclear weapons...

Gavin Newsom goes on the air against Ron DeSantis...

Biden’s Chief of Staff Ron Klain To Depart In...

Post-menopause HRT treatment to be sold in UK pharmacies

The Best Edibles to Bring to Holiday Parties or...

North Korea fires volley of missiles after US, South...

Lyft relaunches monthly subscription plan at half the price

Why do so many devastating earthquakes happen in Afghanistan?

Rising Interest Rates And A Recession In 2022 (Radio)

Chicago bus shooting leaves one dead and another injured

Labour’s Rachel Reeves on Autumn Statement: This is not...

New EU rules would allow it to shut down...

Colin Kaepernick reportedly to work out for Raiders