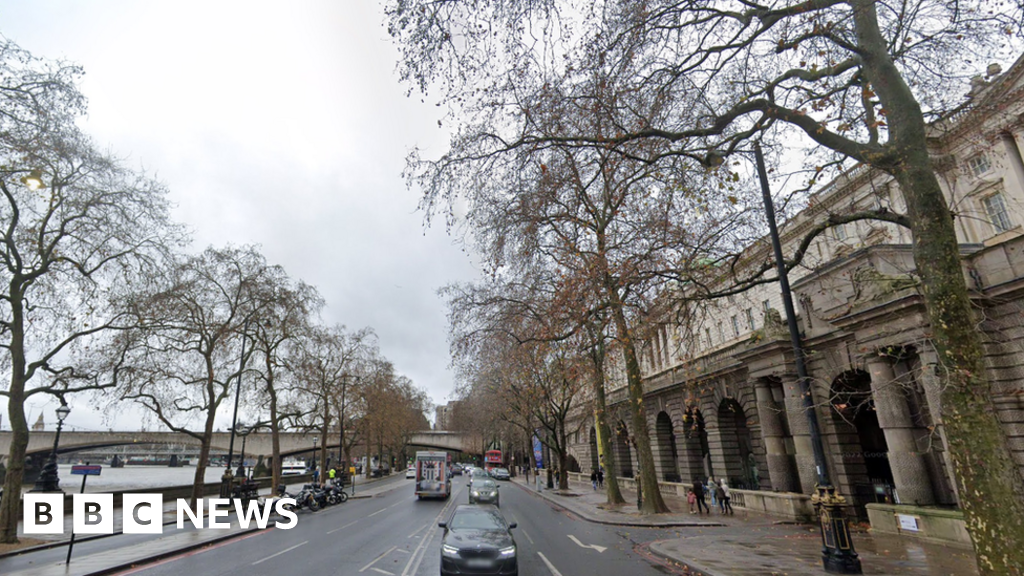 Image caption, Detectives from the Met’s serious collision investigation unit would like to speak with anyone who saw the crash or captured it on dash-cam footage

A 65-year-old cyclist remains in hospital in a critical condition nearly a month after being involved in a serious crash with an e-scooter in central London.

The collision happened on Victoria Embankment on 29 April.

It happened opposite Somerset House at 21:53 BST.

Police said about seven people were riding e-scooters and the one involved in the crash was said to have “off-road type wheels”.

The Met has issued a statement appealing for dash-cam footage adding that detectives would like to speak to anyone who was in the area at the time.

A spokeswoman for the Met said: “The rider was wearing a helmet with a visor and carrying a rucksack with LEDs on the rear showing a ‘Pacman’ logo.

“The rider is thought to have stopped and asked the man if he way okay, possibly in an Eastern European accent, before riding off.” PC and tablet sales are set to plummet again

Trump’s sway with GOP on the ballot in another...

That WhatsApp voice message may be a phishing scam

Pandemic Telehealth Brought Benefit, But Not For Everyone

Rep. Jim Jordan: Durham’s Filing Tells Us There Was...

Wildfire near Yosemite close to grove of historic sequoia...

Figureskating-Japan team hope to get medals in Beijing despite...

Michael Vogelzang on the Markets (Radio)

DOJ Is Likely to Wait Past Midterms to Reveal...

Putin ally: US dream of Russian breakup is road...

President Joe Biden: “The super wealthy are not paying...

BP’s Oil Sands Exit May Not Be the Last...

From Brexit to Partygate, a timeline of Johnson’s career

Here’s the fundamental problem with the RNC chair’s argument...