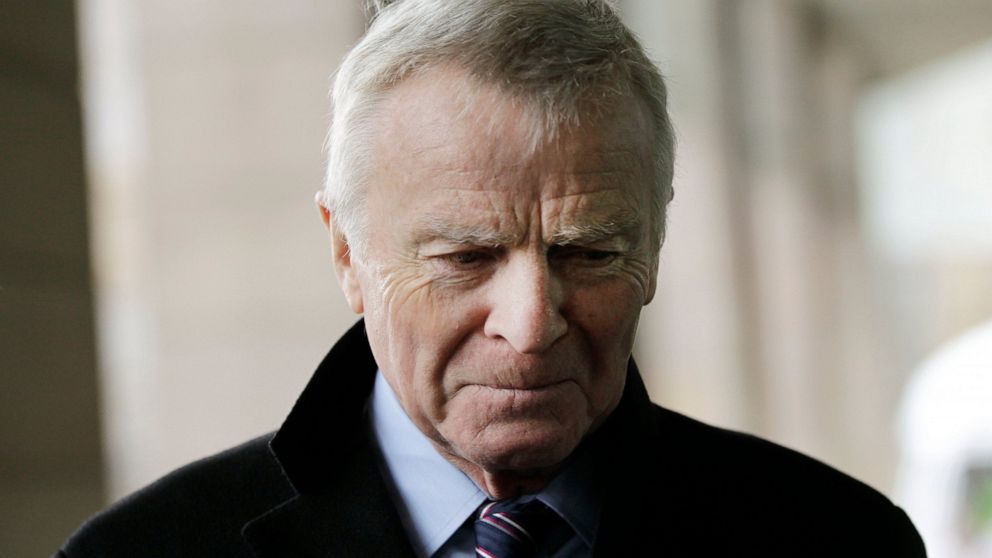 LONDON — Former Formula One boss Max Mosley, who campaigned to change British media laws after tabloid stories about his sex life, has died at the age of 81.

Friend Bernie Ecclestone, the former F1 chief executive, said Monday that Mosley died the previous evening. He did not disclose the cause of death.

He was like family to me. We were like brothers. I am pleased in a way because he suffered for too long, Ecclestone said.

A former race car driver, Mosley served as president of the international automobile federation, which governs Formula One racing, from 1993 until 2009.

Mosley, whose father was 1930s British fascist leader Oswald Mosley, successfully sued the newspaper for invasion of privacy. He acknowledged having sado-masochistic sex with five sex workers, but denied the event had a Nazi theme.

The News of the World was shut down by owner Rupert Murdoch in 2011 after the revelation that in its quest for scoops it had intercepted the voicemails of celebrities, crime victims and members of the royal family. Bird Flu Is Back in the US. No One Knows What Comes Next

The amber warning for heat will be in place from Wednesday until the end of Friday.
Read more

I recently got a brand new Dyson, but these Shark deals are making me regret not waiting.
Read more

60 migrants have been rescued from sweltering trucks in...

Twenty-seven migrants were rescued from a 106-degree truck on Sunday. Another 33 were pulled from a truck June 10 that was about 100 degrees, officials said.
Read more

Afghanistan's government could collapse as quickly as six months after all U.S. troops withdraw from the country, according to new analysis from the U.S. intelligence community.The new assessment, whic...
Read more

The Pentagon on Tuesday officially said Chinese tech giant Xiaomi Corp. will be taken off of a Trump-era blacklist that had prevented U.S. investment in the company. Lawyers for the Defense Department...
Read more

Biden to argue US has reached an ‘inflection point’...

President Joe Biden will argue in a speech on Thursday that the US has reached an "inflection point" as the President pushes for his economic agenda, a White House official told CNN.
Read more

A lawyer calls the ruling pioneering as her client could declare herself as a "co-carer".
Read more

Judge to decide if Covid patient should be allowed...

The woman, in her 50s, is brain damaged and paralysed from the neck down.
Read more

Skype gets updated in Windows 11, but will anyone...

Microsoft announces redesign for Skype, but given its focus on Teams, what's the point?
Read more

Troubles pension scheme to open to applicants on 30...

The long-awaited scheme is already running more than a year behind schedule.
Read more

Reality has no bearing at a Disney theme park -- which is part of the parks' appeal to many LGBTQ fans. The parks provide a candy-coated alternate world where no one questions whether they belong.
Read more

Is it wise for PC gamers to be immediately taking the plunge with Windows 11?
Read more

Pete's Diner and local D.C. residents give back to the thousands of National Guard troops deployed to protect Capitol Hill after the insurrection on January 6. Debra Alfarone reports.
Read more

World number one Novak Djokovic comes from a set down to beat Greece's Stefanos Tsitsipas in their rain-affected Italian Open quarter-final in Rome.
Read more

Hall of Fame hockey goaltender Tony Esposito died Tuesday at age 78 after a battle with pancreatic cancer, according to a statement from the Chicago Blackhawks.
Read more

Chicago White Sox pitcher Ryan Tepera suggested Sunday night something fishy was happening with the Houston Astros again after his team picked up a Game 3 victory in the ALDS and avoided a sweep.
Read more

The man was carrying £140,000 worth of cannabis after crashing his car in a blizzard on the A9.
Read more

Scientists say they are still uncertain about the size of a third wave, but vaccination will be key.
Read more

The suspect in a deadly fire at a mental health clinic in Osaka last week might have studied a fatal 2019 Kyoto Animation studio arson while preparing his own attack that killed 25 people, police say
Read more

At least 4 people died due to icy road conditions in Minnesota as the first snow of the season fell.
Read more

SenseTime Group Inc. co-founder Tang Xiao’ou has become one of the world’s richest people, after the Chinese AI champion blew past concerns about American sanctions to surge as much as 23% on its Hong Kong debut.
Read more

The arrests of 30 marines in the kidnapping of a U.S. citizen followed years of disinterest on both sides of the border.
Read more

Wales finish their season with a defeat against Argentina and now look ahead to New Zealand as opening opponents of the next campaign.
Read more

AC Milan come from behind to defeat fellow Serie A side Genoa after extra time in the Coppa Italia last 16.
Read more

It pays its people in a digital token of its own devising. It’s based wherever its founder happens to be. A growing list of countries want no part of it. And Binance Holdings Ltd. might just be the biggest, craziest thing in the big, crazy realm of cryptocurr…
Read more

John Dalziel, 47, died in hospital after being discovered serious injured in a property in Paisley, Renfrewshire.
Read more

Putin says Biden did not invite him to White...

President Biden did not extend an invitation for Russian President Vladimir Putin to visit the White House during their summit on Wednesday, Putin said at a news conference.The Russian president ...
Read more

From Wi-Fi 6 dongles to game streaming tier upgrades, here’s how I plan to up my game in 2022.
Read more

Ian Blackford: This is a regressive poll tax

With a collapsing economy and severe drought, Afghanistan’s drug trade is on the rise.
Read more

Six U.S. oil executives detained in Venezuela for four years on corruption charges have been granted a hearing before an appeals court, a rare decision by the judicial system in the South American country
Read more

The Chinese Communist Party announced on Monday that it will now be allowing families to have up to three children instead of two children due to its rapidly aging population.Citing China's state...
Read more

How ‘Yellowstone’ Episode 3 Sets Up the New Spin-Off...

Taylor Sheridan made an appearance as Travis in Season 4, Episode 3 of Yellowstone as he arrived to take one of the main characters to the "6666" ranch.
Read more

A Spanish man allegedly drugged and killed his two young daughters before dumping their bodies into the sea – leaving their distraught mom wishing she could have died with them, a report said.
Read more

President Biden and his family are spending Thanksgiving on Nantucket island.
Read more

It's the second time in two weeks that DHS has raised concerns about violence connected to conspiracy theories and domestic extremism.
Read more

How to Schedule Emails and Texts to Send Anytime...

Your messages don’t have to go out right away. Be strategic about when your recipient gets them.
Read more

A man, a woman and the 15-year-old boy are arrested on suspicion of murdering a man in Blackpool.
Read more

MOTD2 analysis: ‘Goal of the season contender’ – How...

Match of the Day 2's Mark Chapman, Jermaine Jenas and Alan Shearer look at the "individual brilliance" of Mohamed Salah and Mateo Kovacic, who both scored during Chelsea and Liverpool's 2-2 draw.
Read more

Burnley manager Sean Dyche says they must turn their performances into "more than a point" after conceding a late equaliser to draw 2-2 against Leicester City.
Read more

President Biden is at a crossroad in infrastructure talks that could determine how much of his agenda he will accomplish before the midterm elections.Facing pressure on all sides and a self-imposed August deadline, observers expect Biden to make a...
Read more

Spain, Netherlands, Portugal and Germany book their place in the last four of the Euro Under-21 Championship thanks to quarter-final wins on Monday.
Read more

US fears that this week's annual world leader jamboree at the United Nations could spark a super spreader event will highlight the stark inequality of global access to Covid-19 vaccines — even as developed nations begin offering booster shots.
Read more

Researchers have discovered what they say is the earliest direct evidence of a shark attack on a human, with the sea creature inflicting some 790 injuries on a man 3,000 years ago.
Read more

Navalny says his health has been declining in prison.
Read more

It is "heartbreaking" not to have been able to evacuate everyone, says the head of the armed forces.
Read more

The Xbox Series X is currently available at Walmart, but at an inflated price. Meanwhile, console trackers are recommending that gamers look to Amazon for the next big restock.
Read more

Scientists will now analyse data after some 11,000 people attended a series of experimental events.
Read more

Rep. Karen Bass (D-Calif.) said Sunday that she disagreed with a call from Republicans to preserve qualified immunity for individual police officers, which she said was shielding bad actors like Derek Chauvin from legal a...
Read more

Commerzbank AG is booking an expense of 470 million euros ($553 million) in the first quarter after reaching an agreement with the works council on 1,700 job cuts.
Read more

How to encourage family and friends to stop spreading...

Your cousin knows for a fact that coronavirus vaccines have mind-controlling microchips. "Stop the steal" conspiracy theories maybe flooded your social media feeds during and after the 2020 US presidential election. Your friend shares an article about why 5G …
Read more

Candy is about to get more "inclusive," with the maker of M&M's announcing its famed characters are getting modern makeovers and will have more "nuanced personalities."Mars, Incorporated, the company behind the...
Read more