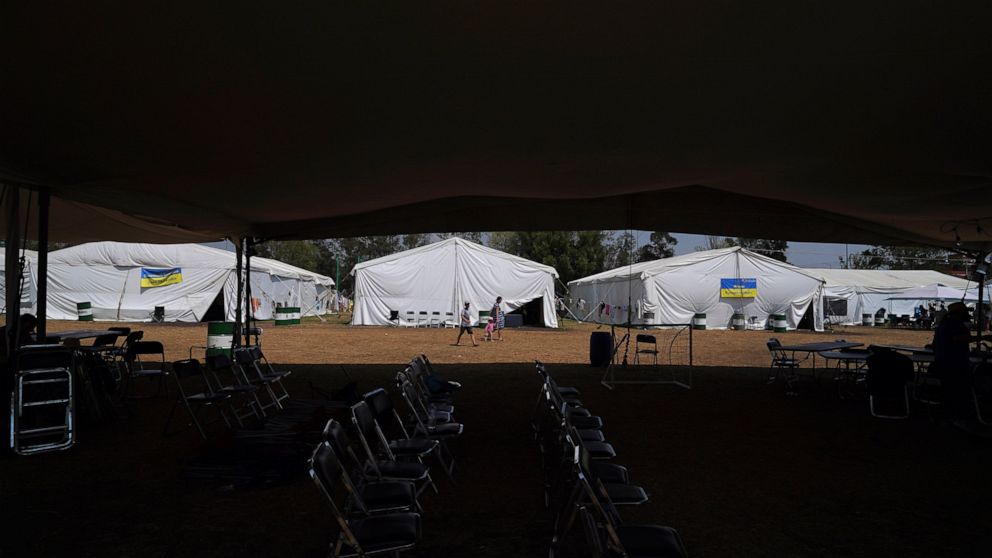 MEXICO CITY — Organizers of a camp for Ukrainian refugees who had traveled to Mexico said Tuesday they will soon close it and discouraged Ukrainians still in Europe from traveling to Mexico as they try to enter the United States.

Some 1,000 Ukrainians passed through the camp during the month that it was open on the east side of Mexico City. Now, only about 120 remain and 98% of those already have sponsors lined up in the United States and expect to soon travel there, said Vlad Fedoryshyn, director of United with Ukraine, a nongovernmental organization, that collaborated with the Mexican government to establish the camp.

Anastasiya Polo, United with Ukraine spokeswoman, said Ukrainians still in Europe should register for the U.S. governments program and not waste money and effort traveling to Mexico. Before the camp was established in Mexico City, Ukrainians were traveling to Tijuana at the U.S.-Mexico border.

We are asking people from Europe, Ukrainians, to go through the program from Europe, do not come to Mexico because it is much more expensive for them, it is a lot of traveling, Polo said. The camp will close by June 1, but Ukrainians remaining in Mexico will continue receiving support.

The program, Uniting for Ukraine, was announced by the U.S. government April 21. Four days later, Ukrainians showing up at the U.S.-Mexico border were no longer exempted from a pandemic-related rule that has been used to quickly expel migrants without an opportunity to seek asylum for the past two years.

To qualify people must have been in Ukraine as of Feb. 11; have a sponsor, which could be family or an organization; meet vaccination and other public health requirements; and pass background checks.

More than 6.5 million Ukrainians, mostly women and children, have fled Ukraine since Russia invaded its smaller neighbor on Feb. 24, according to the U.N. High Commissioner for Refugees. A self-professed “true-crime junkie” inserts himself into a decades-long...

Google is making it easier to remove your personal...

Tucker: Biden has ‘enabled’ an ongoing assault on our...

Rufo blasts Disney as it doubles down against parental...

Ex-GOP congressman gets probation for lying to feds

Jonathan Agnew presented with ECB players’ badge by the...

Nightclubs closing: One in five have shut since Covid-19...

Kinzinger says he wasn’t at Capitol for Jan. 6...

Prince Andrew: Why the military titles and royal patronages...

Spain: FM travels to Brussels to discuss crisis with...

Lamont Dozier, who helped write and produce such Motown...

Farewell to the Crosswalk

Telecom Italia’s Head of Network Is Said to Plan...

US Soccer Equalizes Pay for Women and Men in...

The remains of a 23-year-old killed during a World...

Rail unions refusing advance payments in favor of a...

Biden going to SKorea, Japan in May to discuss...