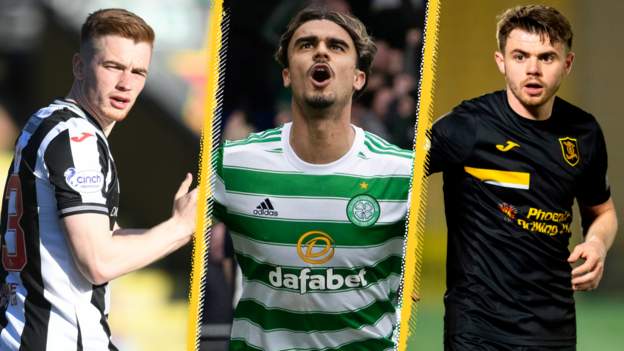 The stalwart turning back the years? The teenager with Italian suitors? The surprise signing who has exceeded expectations?

Throughout the season, BBC Sport Scotland’s online team of journalists have been picking their man of the match from each game. At the same time, fans have been voting for their top performer in the Player Rater.

So who has earned the acclaim of the fans and writers this season at each club?

Scott Brown’s brief stay in the Granite City will not rank too highly when he looks back at his trophy-laden career. The ex-Celtic captain arrived as player-coach in summer as part of Stephen Glass’ management team, but exited in March soon after Glass’ departure and Jim Goodwin’s arrival, with Aberdeen languishing in the bottom six.

Despite that, Brown at times excelled in an Aberdeen shirt, particularly early in the season to win the BBC man of the match award more than any other Dons player so far, with young left-back Jack McKenzie his closest challenger.

But he has been usurped in the fans’ vote by right-back Calvin Ramsay, the teenager’s breakout season reportedly putting him on radar of top clubs in the English Premier League and Italian Serie A.

Benfica’s 23-year-old winger Jota has been a stand out as Celtic won a Premiership and League Cup double, with 13 goals and 12 assists, to lead in both the fans and writers polls.

Whether he will still be at the club next season is yet to be seen, with an option to buy on the table but only after a considerable transfer fee is paid to the Portuguese giants.

Japanese star Kyogo Furuhashi is close behind him but injury problems have curtailed his efforts, with David Turnbull’s early season form, and the outgoing Tom Rogic’s recent inspired performances, both putting them close too.

Even at 36, Charlie Adam has shown he still is able to produce performances as he battled in vain to help Dundee avoid the drop. Their main threat at times arrived from his delivery from set-pieces, and of the eight Dens Park players to have been named BBC man of the match, the veteran midfielder was the clear leader.

For the fans, though, goalkeeper Adam Legzdins has been a stand out. The 35-year-old has been missing since February through injury and his absence was badly missed in the run-in.

Only Peter Pawlett and Dylan Levitt have created more chances per 90 minutes than Ian Harkes, who has also chipped in with three league goals for the Tannadice side, and the American was the BBC’s star man.

However, the fans’ feelings could not be more different. On 19 occasions this season goalkeeper Benjamin Siegrist was voted top player for United, with only defender Liam Smith getting close.

Hearts have had a number of players who have shone this season as they secured third place before the start of the bottom six and reached the Scottish Cup final.

Defender Craig Halkett has broken into the Scotland squad, Beni Baningime excelled in midfield, and Barrie McKay recently earned a new contract with some outstanding displays.

But there can only be one winner. Goalkeeper Craig Gordon looks as good as ever. Five times he has been named BBC man of the match, and on 13 occasions the fans voted him the best player, too.

It is a sign of how poor Hibs’ season has been that Martin Boyle is still the man leading the number of BBC man of the match awards despite leaving the club in January.

Youngster Josh Campbell pushed him close though and the 21-year-old offers hope for the future having extended his deal to 2026 in December.

In the fans vote, Matt Macey just edged out midfielder Scott Allan. The latter has struggled for fitness, but remains a fans’ favourite at Easter Road.

Livingston were agonisingly close to a top-six place and the frustration that their team deserved better was increased by being denied the goal-scoring exploits of striker Bruce Anderson due to injury in recent weeks. Yet it was not the 11-goal striker who leads either the fan or writer awards.

Winger Alan Forrest has been the choice of the BBC with six goals and four assists reportedly putting him on the summer shopping list of Hearts and Dundee United.

And the fans have been voting for Max Stryjek, the Polish goalkeeper earning 12 clean sheets for his side this season. Although, he only just edges out Joel Nouble who has proved to be a more than able replacement for Jay Emmanuel-Thomas.

There is a peculiarity with Motherwell’s choice of player of the season.

Midfielder Sean Goss is the clear choice of the fans, with four league assists this season and his first goal of the campaign arriving in the recent 4-2 win over St Mirren. Tony Watt may well have taken the award had he not made a mid-season move to Dundee United.

Yet, despite being held in such high esteem by the Motherwell faithful, the 26-year-old Goss has so far not won a single man of the match award from the BBC writers. Instead, it is a tie between Watt and Kevin van Veen, who scored 21 goals between them in the claret and amber this season.

The battle to be Rangers player of the season had more players fighting for the crown than any other club.

Captain James Tavernier’s incredible season – 13 goals and 14 assists in the league, as well as notching his 80th goal for the club in the win over Motherwell – has him just ahead of Fashion Sakala and Joe Aribo in the writers’ award.

He was close to taking the fans’ award, with Ryan Kent and Alfredo Morelos also battling away, but goalkeeper Allan McGregor is the man who just edged it. Of late his performances may have dipped slightly, but at the beginning of the season he was in outstanding form to win the acclaim of the support.

Perhaps the biggest surprise with Ross County, from an outsider’s point of view, is that top goalscorer Regan Charles-Cook is not topping either the fans or writers’ poll. The Englishman boasts 13 goals this season, but he has been outshone by others as the Highlanders chased a Europa Conference League qualifying place.

The BBC writers have Joseph Hungbo as our star man, with five man of the match awards across the season. Seven goals in 33 appearances helped haul Malky Mackay’s team up into the top six.

The fans have given their votes to defender Connor Randall, the 26-year-old helping his team to nine clean sheets this term.

In what has been a testing season for St Johnstone, with last season’s double cup winners battling to ensure Premiership survival, one man has stood out for both fans and writers.

Goalkeeper Zander Clark, who could yet get himself on the plane to Qatar should Scotland qualify for the World Cup, has been impressive again.

However, a notable mention for striker Callum Hendry, whose late run of form and goals has not gone unnoticed.

It’s been another rollercoaster campaign for St Mirren. Once again they were eyeing a top-six place, but this time a manager change unsettled them as Jim Goodwin departed for Aberdeen, with Stephen Robinson unable to secure a place in the top half.

On-loan Wolves midfielder Connor Ronan did just enough to take the BBC accolade ahead of forward Eamonn Brophy, who scored eight goals across the season.

And in the fans poll, the 24-year-old Ronan is also out in front, being named top Buddie on 10 occasions, two ahead of his nearest challenger goalkeeper Jak Alnwick.

JASON CHAFFETZ: A part of the Twitter Files didn’t...

Cawthorn’s out, Maloney’s in a mess

Reports: Twitter in talks with Musk over bid to...

Abrams Tanks Ukraine: US Set to Announce It Will...

James Anderson has ‘made peace’ with being dropped by...

Apple Watch 8 could be two years behind Fitbit’s...

Australia honey bees put in lockdown due to deadly...

Hyundai wants all of its vehicles to support over-the-air...

Kyiv mayor proud of citizens’ resolve but uncertain about...

Hurricane Ian: They stayed for the storm – what...

Generic Drug Supply in US Is Very Reliant on...

Russia’s Kyiv offensive stalls, as Ukrainians counterattack in the...

NFL QB battles: Who stood out in preseason Week...

Jewish designers to be celebrated in London exhibition

GOP lawmaker slams ‘Lord Fauci’ for insinuating he has...

Bulk of US Venture Investors Want to Back Minority-Run...

MLB odds: How to Bet Cubs-Reds Field of Dreams...

Instafest app lets you create your own festival lineup...

This Eufy robot vacuum is back to its lowest-ever...

Police in Texas say shooter who prompted lockdown at school district is...