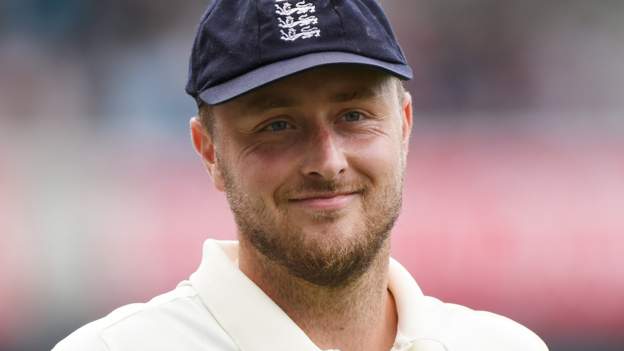 Ollie Robinson has taken 39 wickets in nine Tests for England

England seamer Ollie Robinson has been named in a County Select XI squad to take on New Zealand in their final tour game before the first Test, which begins on 2 June.

Robinson was left out of the England party for the first Test at Lord’s after a number of fitness issues.

Opener Dom Sibley, who was dropped by England last summer, will also play in the four-day match at Chelmsford, which begins on Thursday.

Kent opener Ben Compton is included as a reward for his superb domestic form.

Compton’s 878 runs is the most in either division of the County Championship so far this season.

Sussex’s Robinson, 28, has taken 39 wickets in nine Tests for England.

He was criticised for his fitness during the Ashes tour by England bowling coach Jon Lewis, then missed all three Tests on the tour of West Indies.

Despite seven bowlers missing England’s first Test against New Zealand at through injury, Robinson was overlooked because of a lack of bowling so far this season.

He played for Sussex against New Zealand in a rain-affected tour match last weekend, managing figures of 0-42 from 18 overs.

Predibase exits stealth with a low-code platform for building...

Body of skier missing since Christmas found near neighborhood...

What J.J. Watt Wants to Do After the NFL

Police: Driver in Nebraska crash that killed 6 was...

YouTube’s head of gaming and two other executives are...

Unity and IronSource’s $4.4B merger is now complete

YouTube Music is bringing an incredibly useful feature to...

Community shaken after farmer among 4 dead in suspected...

Raimondo: US isn’t seeking to sever economic ties with...

Thoughts for the Dead

Leadership lessons from the world of sports

Chipotle Is Latest Company to Pull Back Paid Ads...

Trial begins for only former officer charged in Breonna...

Putting a Number on Viewpoint Diversity

Met Police: Dame Cressida Dick says she has no...

There’s a lack of relief stops for London bus...

Instagram will begin testing a new repost feature with...

Cracker Barrel enraged some of its fans with a...