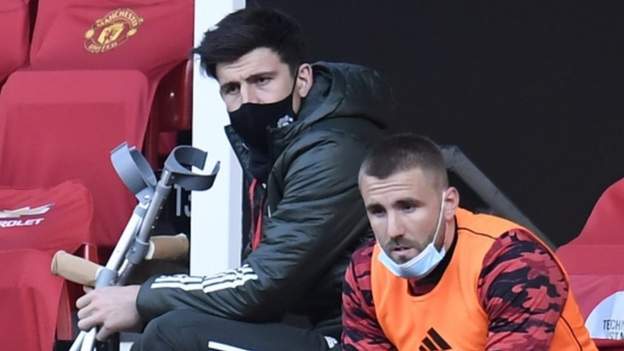 Manchester United manager Ole Gunnar Solskjaer says he does not expect captain Harry Maguire to be fit enough to play in Wednesday’s Europa League final with Villarreal in Gdansk.

The England defender attended a screening of Sir Alex Ferguson’s film at Old Trafford on Thursday without crutches, sparking hope he may be fit.

“He is walking but it is a long way from that to running,” said Solskjaer.

“We will give him every chance but I don’t think we will see him in Gdansk. Steadily but surely he is improving but ligaments take time to heal.”

Solskjaer said even if he is not fit, Maguire will still be in Poland and play an important part in United’s preparations as they try to win their first trophy since 2017.

Speaking before Sunday’s Premier League last-day trip to Wolves, the Norwegian also said his side had made significant improvements this season in securing only their second runners-up spot since Ferguson retired in 2013.

However, he thinks the club need to be active in the transfer market this summer if they are to close the gap on champions Manchester City.

“I hope we will strengthen with two or three players we definitely need to challenge higher up the table,” said Solskjaer. “We are too far behind to think it will come by itself.” CDC on omicron cases, hospitalizations: ‘Milder does not mean mild’

Leakers think the Xiaomi 12 release date will be...

The Xiaomi Mi 11 showed up two months before we expected it, and apparently the Mi 12 will arrive even earlier this year.
Read more

Fresh Prince of Bel-Air: Will Smith reveals who will...

Newcomer Jabari Banks will take on the role in the upcoming NBC Peacock reboot of the hit 199s show.
Read more

Capitol riot defendants use journalism as defense against charges

Eight people charged in cases related to the Capitol riot on Jan. 6 are using journalism as part of their defense, ...
Read more

Tesla to move headquarters from California to Texas

Georgia Gov. Brian Kemp (R) said Tuesday that he will expand access to the COVID-19 vaccine to all adults living in the state, a policy that will go into effect Thursday and comes just a week after he eliminated special C...
Read more

Cardiff City defender Sol Bamba talks about his non-Hodgkin lymphoma diagnosis, the support he received from his club and the NHS, and his return to playing.
Read more

‘Vaccine passports’: Will they be available in the U.S....

Psaki: Florida schools not having mask mandate ‘would be greatly concerning’

White House press secretary Jen Psaki pushed back on Florida Gov. Ron DeSantis's (R) comments that there will be no mask mandates in Florida schools, saying it's "concerning" because kids under 12 are not vaccinated....
Read more

But Downing Street rejects calls to apologise for Boris Johnson's remarks on a visit to Scotland.
Read more

Why is Trump investigating an election he won?

The deal would mean an end to Benjamin Netanyahu's 12-year tenure as prime minister.
Read more

“Pioneer Woman” star Ree Drummond took to Instagram to share a handful of selfies taken with her husband Ladd during their getaway to Colorado.
Read more

American Simone Biles pulls out of the vault and uneven bars gymnastics finals at the Tokyo 2020 Olympics.
Read more

How TV’s The Windsors is making its unregal stage...

The creator and cast of the royal comedy satire take us behind the scenes of their West End show.
Read more

The last-minute coal demand that almost sunk the Glasgow...

At issue was a late push from China and India.
Read more

GTA Trilogy releases in November with a fitting new...

The Grand Theft Auto Trilogy Definitive Edition has finally received a release date, and it's out very soon.
Read more

Gilead Sciences Inc. persuaded a U.S. appeals court to reverse a $1.2 billion judgment Bristol-Myers Inc. had won over revolutionary treatments that use a body’s own immune system to fight cancer.
Read more

Google will rewards certain developers with a higher sales...

A total of 80 accounts have been suspended following a report into the network.
Read more

The Ecovacs Deebot T9+ vacuums, mops and has a built-in air freshener to keep your home smelling fresh as a daisy.
Read more

Former Attorney General Bill Barr is poised to release a memoir detailing his service under the George H.W. Bush and Trump administrations in early March. The memoir, titled "One Damn Thing After...
Read more

Hibernian lodge an appeal against the red card shown to Ryan Porteous in Sunday's defeat by Rangers.
Read more

MSI revealed test results of their latest Raider gaming laptop's RTX 3080 cryptomining hashrate in a company blog post - which has since been taken down.
Read more

GOP senator on DC statehood: ‘No one is compelled...

GOP Sen. James Lankford (Okla.) on Tuesday vocalized opposition to making Washington, D.C. the 51st state in the union, arguing that the nation’s capital has not had voting representatives in Congress for some time and that “no one's compelled to actually” li…
Read more

A Closer Look At Markets, Focus On The Fed...

N.Y. Must Give Religious Exemption for Healthcare Worker Vaccine

This cheap SIM only deal offers 100GB of data...

Oil Edges Lower at the Open After Ending Ugly...

Brent oil edged lower as trading started in Asia, struggling to hold on to a bounce at the end of the worst week since October.
Read more

The Best Buy sale kicks off today and we're rounding up the best deals on 4K TVs, laptops, the Apple Watch, iPhone, and more.
Read more

Rep. Kevin Brady (R-Texas) on Wednesday said he thinks it will be challenging for Congress to sign off on an international tax deal, as the Biden administration seeks to make progress on such an agreement this week....
Read more

In September 2019 there were about 80 homeless people in Cardiff, compared to about eight now.
Read more

Omicron variant of COVID-19 found in multiple US states

The omicron variant of COVID-19, which had been undetected in the U.S. before the middle of this week, had been discovered in at least five states by the end of Thursday, showing yet again how mutations of the virus can circumnavigate the globe with speed and…
Read more

Biggs accuses DHS of ‘clear violation’ of law by...

FIRST ON FOX: Rep. Andy Biggs, R-Ariz., on Wednesday wrote to Homeland Security Secretary Alejandro Mayorkas, accusing the department of a "clear violation" of immigration law as it releases migrants into the interior of the U.S. without a court date.
Read more

People in several states on the West Coast saw a fireball light up the night sky Tuesday night. Anna Werner explains where exactly it came from.
Read more

Facebook withheld information about its VIP program, Oversight Board...

Facebook failed to provide its Oversight Board with information about its cross-check system that reportedly kept certain VIP users - including former President Trump - from facing the platform's content moderation ...
Read more

The Chicago Public Schools has canceled classes for a fourth consecutive day as city officials and representatives from the Chicago Teachers union have not to come to an agreement on coronavirus safety measures.
Read more

American Airlines is joining several other carriers in requiring its employees to get vaccinated against COVID-19.In a letter to employees on Friday, Chairman and CEO Doug Parker and President Robert Isom said that employees...
Read more

Manchin has yet to say a word on whether he supports Tracy Stone-Manning, Biden’s nominee to lead BLM that has come under major scrutiny in recent weeks.
Read more

A new report from the NOAA finds that despite global shutdowns, greenhouse gas levels in 2020 surged. In fact, levels of carbon dioxide are at the highest they've been in 3.6 million years. CBS News meteorologist and climate specialist Jeff Berardelli joins C…
Read more

The Xbox Series X wireless controller is seeing some rare discounts at both Amazon and Microsoft today, with some record low prices on certain colors.
Read more

Just ahead of Black Friday, Apple's all-new AirPods Pro are on sale for a record-low price of $189.99.
Read more

Canadian Minister Justin Trudeau says residential schools were part of a larger colonial policy designed to erase language and culture, and to assimilate Indigenous communities so that they no longer existed as distinct peoples
Read more

Hannity reflects on how Democrats’ liberal policies led to...

Charles Waterhouse dedicated much of his life to the Marines. In his 80s and in failing health, he set out on his final mission: To paint every Marine who received the Medal of Honor. David Martin shares his story.
Read more

A devastating building collapse in South Florida. Also, a Minnesota judge sentenced former Minneapolis police officer Derek Chauvin to 22 and 1/2 years in prison for the murder of George Floyd. All that and all that matters in today’s Eye Opener. Your world i…
Read more

Crypto exchanges are set to be a primary focus of the U.S. Securities and Exchange Commission’s crackdown on digital assets in 2022.
Read more

US, NATO to ‘expose’ China for ‘malicious cyber activities’

Workers face mounting pressure to get vaccinated — or...

Tesla to use in-car cameras to monitor drivers using...

Tesla will be using in-car cameras to monitor drivers using Autopilot after many reports of people being able to trick the vehicle into going into Autopilot while the driver was not at the wheel....
Read more

The main reason Trump failed to overturn the election...

‘The nicest questions.’ Here are some of Biden’s moments as he reads his report card to the press.
Read more

The U.S. Marshals Service put David Sweat and Richard Matt, killers who escaped a New York prison almost two weeks ago, on its "15 Most Wanted" list. Michelle Miller spoke to a former prison guard who worked at the maximum security prison in Dannemora, New Yo…
Read more

Afghanistan: US and UK withdrawal a catastrophic miscalculation, says...

The shadow foreign secretary calls on the UK government to act amid the unfolding crisis.
Read more

Jamie Dimon said that, for the first time in his life, there’s “huge pressure” on the U.S. labor market.
Read more

The younMore than half of the youngest age group eligible for vaccination have received a first dose.
Read more

Israel, Hamas agree to cease-fire in Gaza conflict after 11 days of...