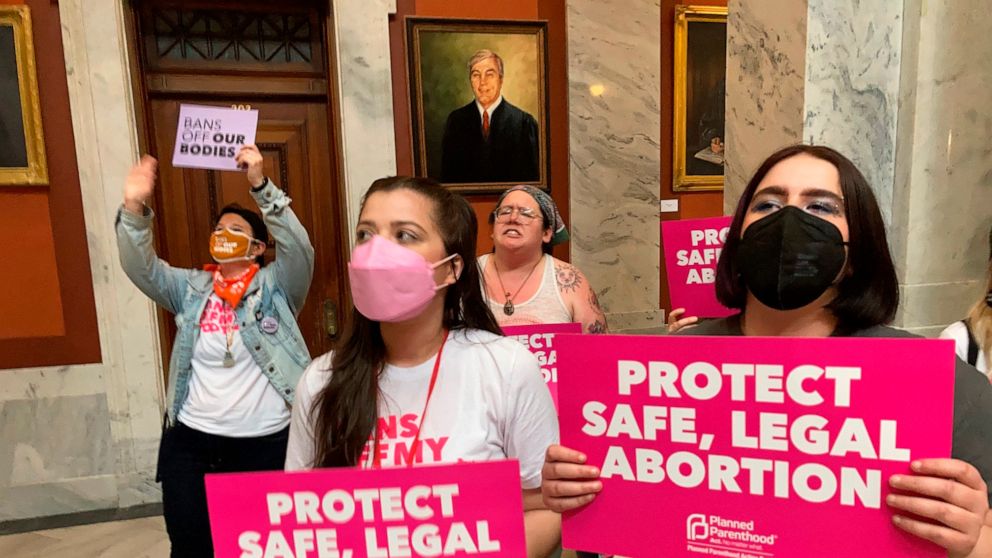 LOUISVILLE, Ky. — A federal judge on Thursday extended an order blocking key portions of a new Kentucky abortion law that had forced the state’s two clinics to temporarily halt abortions.

The ruling said that the law’s 15-week ban on abortions would remain blocked until the U.S. Supreme Court rules on a related abortion case in Mississippi.

U.S. District Judge Rebecca Grady Jennings’ ruling means that Kentucky officials cannot enforce other disputed provisions until the state adopts and funds regulations under which abortion providers would have to comply.

The judge had previously suspended enforcement of the measure passed by the Republican-dominated legislature last month over a veto by Democratic Gov. Andy Beshear.

The judge’s order Thursday extended the suspension of the measure’s ban on abortions after 15 weeks of pregnancy and the requirement that women be examined by a doctor before receiving abortion pills. It also applies to new restrictions and reporting requirements that the Kentucky clinics said they couldnt immediately comply with. Noncompliance could result in stiff fines, felony penalties and revocation of physician and facility licenses.

Kentuckians can breathe a sigh of relief that these extreme restrictions will remain blocked and abortion will remain accessible for now,” said Rebecca Gibron, CEO for Planned Parenthood in Kentucky. For nearly a week (in April), we were blocked from providing this critical and time-sensitive health care. We cant go back.

Kentucky Republican Attorney General Daniel Cameron, who is defending the new law in court, said the judge’s latest order was disappointing but added that the case is far from over.

Cameron said he was appealing, saying he would “take every available measure to continue defending this important law, which protects unborn life and womens health.

Overshadowing the Kentucky dispute is the abortion case before the U.S. Supreme Court. A recently leaked draft opinion suggested the nation’s high court could be poised to overturn the landmark 1973 Roe v. Wade case that legalized abortion nationwide.

Jennings, who was appointed by former President Donald Trump, said the matter before the Supreme Court, Dobbs v. Jackson Women’s Health Organization, “is identical to the issue in this case.

In the Kentucky case, Jennings found issues with the new state requirements. She wrote that it’s undisputed that the new abortion measure does not contain funding for the forms, regulations, and programs required by the law.

Under Kentucky law, a bill that requires funding to execute but does not contain a funding provision cannot immediately take effect, she wrote.

Supporters of the new law say the goal is to protect womens health and strengthen oversight. Opponents say the objective all along was to stop abortions in the state.

Abortions were suspended at the two Louisville clinics in the days after the law took effect. During that time, women in Kentucky were forced to either travel out of state to end their pregnancies or wait for the judges decision. Many of the women affected were young and poor, advocates said.

Attorneys for the two Kentucky clinics Planned Parenthood and EMW Womens Surgical Center challenged the measure and won the orders halting its enforcement. GLOBAL ECONOMY Asia’s factory activity slows in May as...

Drug courier caught with cocaine and heroin jailed for...

Meadows Thrust Back Into Spotlight…

‘It Grosses Me Out’: Internet Slams Man for Making...

What’s at stake for Dak Prescott, Cowboys in Week...

This Eufy robot vacuum is back to its lowest-ever...

Tech Companies Are Relinquishing Some Control of Online Ads...

Ableton offers 25 percent off all of its music...

A World Cup of Political Symbolism in Silence

Start the year off with some New Year security...

Migrants being stranded in London was a mistake –...

‘Life Is Too Short’: Internet Praises Mom Who Wants...

The growing impacts of climate change on Australia

Police hunt gunman who shot child, 9, in her...