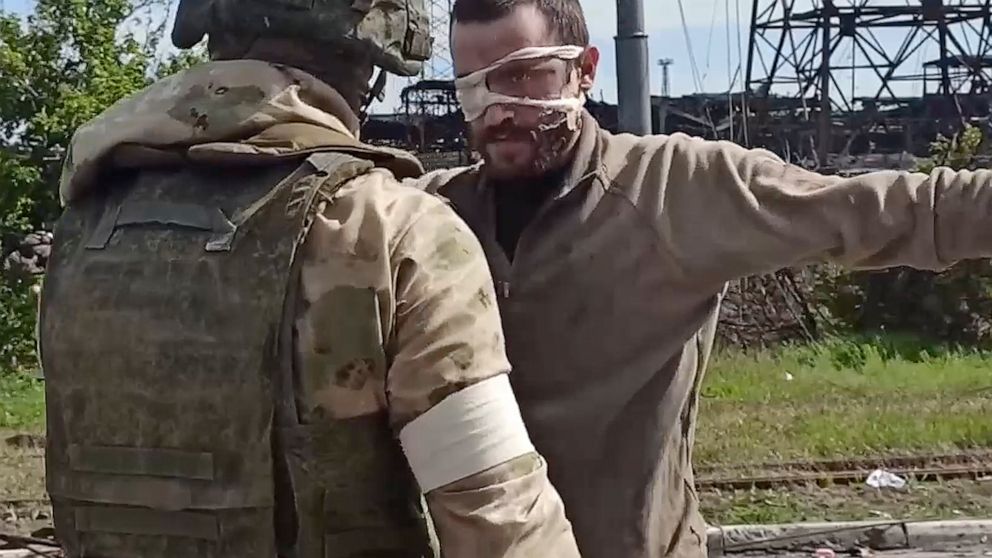 KYIV, Ukraine — The battle that turned Mariupol into a worldwide symbol of defiance and suffering drew toward a close as Russia said nearly 1,000 last-ditch Ukrainian fighters who held out inside a pulverized steel plant had surrendered.

Meanwhile, the first captured Russian soldier to be put on trial by Ukraine on war-crimes charges pleaded guilty Wednesday to killing a civilian and could get life in prison. Finland and Sweden applied to join NATO, abandoning generations of neutrality for fear that Russian President Vladimir Putin will not stop with Ukraine.

The Ukrainian fighters who emerged from the ruined Azovstal steelworks after being ordered by their military to abandon the last stronghold of resistance in the now-flattened port city face an uncertain fate. Some were taken by the Russians to a former penal colony in territory controlled by Moscow-backed separatists.

While Ukraine said it hopes to get the soldiers back in a prisoner swap, Russia threatened to put some of them on trial for war crimes.

Amnesty International said the Red Cross should be given immediate access to the fighters. Denis Krivosheev, Amnesty’s deputy director for the region, cited lawless executions allegedly carried out by Russian forces in Ukraine and said the Azovstal defenders must not meet the same fate.

It was unclear how many fighters remained inside the plants labyrinth of tunnels and bunkers, where 2,000 were believed to be holed up at one point. A separatist leader in the region said no top commanders had emerged from the steelworks.

The plant was the only thing standing in the way of Russia declaring the full capture of Mariupol. Its fall would make Mariupol the biggest Ukrainian city to be taken by Moscow’s forces, giving a boost to Putin in a war where many of his plans have gone awry.

Military analysts, though, said the city’s capture at this point would hold more symbolic importance than anything else, since Mariupol is already effectively under Moscow’s control and most of the Russian forces that were tied down by the drawn-out fighting have already left.

Video showed the fighters carrying out their wounded on stretchers and undergoing pat-down searches before being taken away on buses escorted by military vehicles bearing the pro-Kremlin Z sign.

The U.S. has gathered intelligence that shows some Russian officials have become concerned that Kremlin forces in Mariupol are carrying out abuses, including beating and electrocuting city officials and robbing homes, according to a U.S official familiar with the findings.

The Russian officials are concerned that the abuses will further inspire residents to resist the occupation and that the treatment runs counter to Russias claims that its military has liberated Russian speakers, according to the official, who was not authorized to comment.

The administration said on Telegram that the Russian military does not maintain the tracks and overloads the trains, and with help from resistance fighters the train derailed. The reports could not be independently confirmed.

In a sign of normalcy returning to Kyiv, the U.S. Embassy reopened on Wednesday, one month after Russian forces abandoned their bid to seize the capital and three months after the outpost was closed. A dozen embassy employees watched solemnly as the American flag was raised. Other Western countries have been reopening their embassies in Kyiv as well.

In the war-crimes case in Kyiv, Russian Sgt. Vadim Shishimarin, a 21-year-old member of a tank unit, pleaded guilty to shooting an unarmed 62-year-old Ukrainian man in the head through a car window in the opening days of the war. Ukraine’s top prosecutor has said some 40 more war-crimes cases are being readied.

On the diplomatic front, Finland and Sweden could become members of NATO in a matter of months, though objections from Turkish President Recep Tayyip Erdogan threaten to disrupt things. Turkey accuses the two countries of harboring Kurdish militants and others it considers a threat to its security.

Ibrahim Kalin, a foreign policy adviser and spokesman for Erdogan, said there will be no progress on the membership applications unless Turkey’s concerns are met. Each of NATOs 30 countries has an effective veto over new members.

Mariupol’s defenders grimly clung to the steel mill for months and against the odds, preventing Russia from completing its occupation of the city and its port.

Its full capture would give Russia an unbroken land bridge to the Crimean Peninsula, which it seized from Ukraine in 2014. It also would allow Russia to focus fully on the larger battle for the Donbas, Ukraine’s industrial east.

For Ukraine, the order to the fighters to surrender could leave President Volodymyr Zelenskyy’s government open to allegations it abandoned the troops he described as heroes.

Zelenskyy may face unpleasant questions, said Volodymyr Fesenko, who heads the independent Penta think tank in Kyiv. There have been voices of discontent and accusations of betraying Ukrainian soldiers.

A hoped-for prisoner swap could also fall through, he cautioned.

Russias main federal investigative body said it intends to interrogate the surrendering troops to identify the nationalists and determine whether they were involved in crimes against civilians.

Also, Russias top prosecutor asked the countrys Supreme Court to designate Ukraines Azov Regiment among the troops that made up the Azovstal garrison as a terrorist organization. The regiment has roots in the far right.

The Russian parliament was scheduled to consider a resolution to ban the exchange of any Azov Regiment fighters but didnt take up the issue Wednesday.

Mariupol was a target of the Russians from the outset. The city its prewar population of about 430,000 now reduced by about three-quarters has largely been reduced to rubble by relentless bombardment, and Ukraine says over 20,000 civilians have been killed there.

In other developments, Russian Deputy Prime Minister Yuri Borisov said Russia has begun using a prototype new laser weapon in Ukraine that is capable of hitting a target 5 kilometers (3 miles) away, state news agency Tass quoted him as saying on national television. He said it was tested Tuesday against a drone and incinerated it within five seconds.

Speaking late Wednesday in his nightly video address, Zelenskyy likened the Russian boast to Nazi Germanys claims of Wunderwaffe, or wonder weapons, as the tide began to turn against it during World War II.

A senior U.S. defense official said Wednesday that the U.S. has seen nothing to corroborate the claims. The official spoke on condition of anonymity to discuss the U.S. military assessment.

McQuillan and Yuras Karmanau reported from Lviv, Ukraine. Mstyslav Chernov and Andrea Rosa in Kharkiv, Elena Becatoros in Odesa, Lorne Cook in Brussels, Aamer Madhani in Washington and other AP staffers around the world contributed.

Follow APs coverage of the war in Ukraine: https://apnews.com/hub/russia-ukraine

Lulu makes a shout for Glasgow to land Eurovision

US dairy industry claims victory over Canada in trade...

Rafael Nadal wins his first tournament since returning from...

In Praise of Religious Populism

EnBW says it is pressing ahead with planned sale...

Richard Osman to embark on new series of crime...

Ex-chancellor Merkel’s memoirs to be published in 2024

Here are the key questions that remain unanswered after...

January 6 committee has been talking with ex-attorney general...

What can we do to get more women into...

Ahead of U.S. Open defence, Raducanu highlights depth of...

Heat wave a glimpse of climate change’s impact in...

One in five businesses braced for cuts as energy...

Hyundai, Kia owners should park outside because vehicles can...

Buffalo mass shooter to be arraigned on federal charges

Summer travel: How to pack a carry-on (and nothing...

Man charged over death of 47-year-old in Glasgow

Thousands of workers have lost access to trade assistance...

7 common mistakes to avoid when choosing a web...