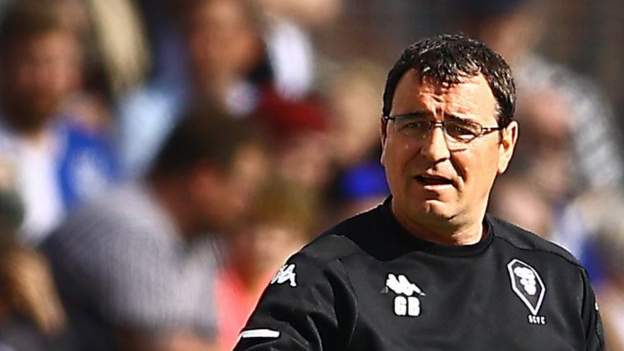 The 50-year-old former Blackburn and Bradford boss was initially appointed on a short-term basis in March 2021.

He agreed to a full-time role on a two-year deal that May but could only lead the club to a 10th-placed finish this term, seven points off a play-off spot.

Assistant Billy Barr has also had his contract terminated by the Ammies.

In a statement, Salford said news regarding the managerial position will be announced in due course.

In 2020-21, Bowyer replaced Richie Wellens following his departure by mutual consent, and he went on to lead them to an eighth-placed finish, two points off a play-off place.

Having previously been under-23s manager at Derby County, working under boss Wayne Rooney, Bowyer had been expected to return to the Rams but instead joined Salford on a permanent basis last summer.

However, Salford missed out on a play-off spot again after a mixed season, despite a stronger showing in the second half of the campaign.

‘Another summer of change at the Peninsula Stadium’

Under Gary Bowyer, Salford City have had a measured approach, which they lacked last season, having appointed four managers across a single campaign.

Injuries to key players like Ian Henderson and summer recruit Connor McAleny contributed to a tough first half of the season, managing only seven wins and 24 goals prior to January.

Their chance to revive any hopes of a promotion push came in the January transfer window as they brought in statement signing striker Matt Smith from Millwall, which followed deals for midfielders Ryan Watson and Stephen Kelly. Once Bowyer had the tools, the results began to follow.

The Ammies lost just three games after the window closed, drawing six and winning nine games and provided the club with hope of finishing in the top seven.

But they just fell short after defeats against rivals in the League Two play-off picture.

Despite missing out, it seemed like Bowyer had built a platform to build on for next season with little upheaval required, but now with his departure, whoever comes in will have their own ideas and it could be another summer of change at the Peninsula Stadium.

US casinos had best month ever in March, winning...

Florida man accused of calling 911 to have meth...

BeReal Basics: How to Use the ‘Unfiltered’ Social Media...

Dolphins vs Titans live stream: how to watch NFL...

Who Is Vontae Johnson? Meet the ‘Cheer’ Season 2...

Windows 11 is getting a fresh new email app

Is a new Amazon Fire 7 tablet about to...

Tweaked COVID boosters in US must target newer omicron...

Manchester City could face Real Madrid in their quest...

Tulsa Race Massacre survivors seek justice in what could...

Cheslie Kryst’s mom speaks out on her daughter’s mental...

WHO: China's COVID plan is 'unsustainable' due to omicron