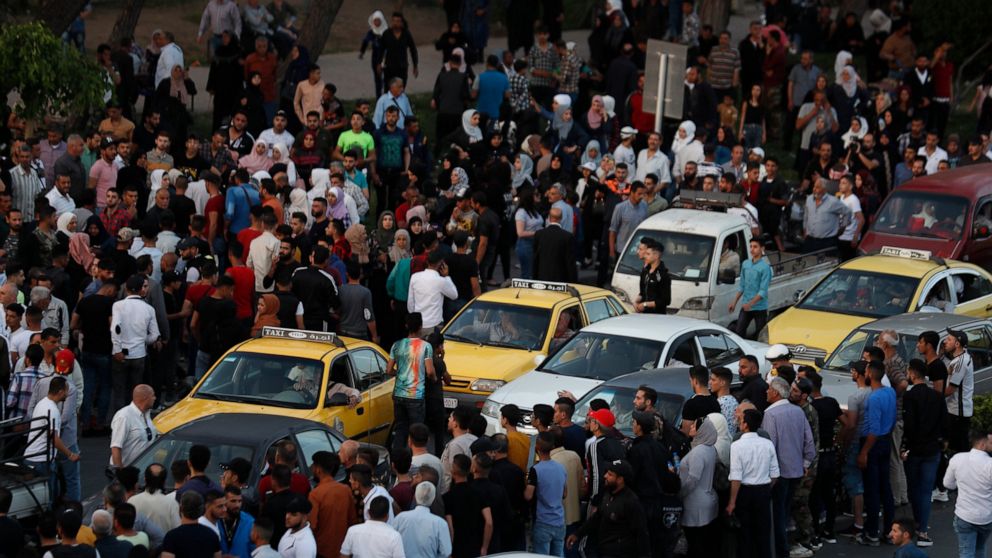 BEIRUT — For years, the Siyam family clung to hope they would one day be reunited with their son Wassim, who they believed was being held in a Syrian government prison after he went missing at a checkpoint nearly a decade ago.

That hope evaporated the moment they saw him in a newly leaked video: He was among dozens of blindfolded, bound men who, one by one, were shot and thrown into a trench by Syrian security agents.

It shocked us to our core, Siham Siyam said of the gruesome video, which was taken in 2013 and emerged late last month.

They killed him in cold blood … No mother can accept to see her child being harmed this way, Siham told The Associated Press from Germany, where she now lives with her family.

The video has set off a wave of grief and fear rippling through the families of the tens of thousands of Syrians who disappeared during their countrys long-running civil war. After the video went online, thousands rushed to painstakingly scan through the footage online for traces of vanished relatives.

Even as similar atrocities take place in Ukraine, the Syrian wars years-old massacres and disappearances have gone unpunished and largely uninvestigated. Families of the missing who spoke to the AP describe an endless torture inflicted on them daily, not knowing their loved ones fate.

The video was allegedly smuggled out of Syria by a pro-government militiaman who gave it to a pair of University of Amsterdam researchers, apparently in hopes it would help him get asylum outside Syria. The researchers worked to verify it and identify the location and some of the perpetrators.

The British newspaper The Guardian first reported on the video in late April, and a fuller version of the video has since circulated widely online.

Even if the families loved ones do not appear in the video, the horrible images will be forever etched into their mind, and they will wonder if they faced the same fate, Mohammad Al Abdallah, the Executive Director of the Washington-based Syria Justice and Accountability Centre, told the AP.

He called Syrias network of prisons the Black Box, with no information about who is held inside and who has been killed.

Learning the truth brings a new kind of torment.

Siham and her husband vow to watch the video every day, to see their sons last moments alive and to bid him farewell.

The video was stamped with the date April 16, 2013, two days after Wassim, a father of two who would now be 39, disappeared at a checkpoint near the Palestinian refugee camp of Yarmouk on the outskirts of Damascus.

The 6 minute and 43 second clip shows members of Syrias notorious Military Intelligence Branch 227 with a line of around 40 prisoners in an abandoned building in Tadamon, a suburb of Damascus near Yarmouk. For much of the war, the district was a front line between government forces and opposition fighters.

The prisoners are blindfolded, with their arms tied behind their backs. One after another, the Branch 227 gunmen stand them at the edge of a trench filled with old tires, then push or kick the men in, shooting them as they fall.

In a cruel game, the agents tell some including Wassim that they are going to pass through a snipers alley and that they should run. The men tumble onto the bodies of those who went before. As bodies pile up in the trench, some still move, and the gunmen shoot into them.

Then the gunmen set the bodies on fire, presumably to erase all traces of the massacre.

According to the Syrian Network for Human Rights, 102,207 people remain missing, more than 11 years since Syria’s conflict began.

The group says the one most responsible for forced disappearances is the Syrian government with 86,792 people missing, an unknown number of whom vanished into the murky labyrinth of prisons. The Islamic State group was responsible for 8,648 disappearances, and armed opposition groups for 2,567. The rest were held by the U.S.-backed Kurdish-led Syrian Democratic Forces and al-Qaida-linked militants.

One man who spoke to the AP said 25 of his relatives were taken from their homes in Tadamon by Branch 227 agents in July 2013.

We are sure they were killed the same way (as those in the video) because they were taken by the same people who appeared in the video, said the man, who asked that his name not be made public.

He said residents know of multiple pits in Tadamon where people were killed and later burned. Security agents who appear in the video were neighbors of the missing families and had known each other for over 30 years, he said.

Among his missing relatives are children and a sister who went to check on her family two days after they were taken from their home. She never returned.

His familys tragedy didnt end there. A few months later, a brother who wasnt present the day his family disappeared was taken from a checkpoint. Years later, a photo of his tortured body appeared in a large file of photos and documents smuggled out by a dissident known as Caesar.

In a May 9 open letter, 17 human rights and civil society organizations urged the U.N. Security Council to launch an investigation into the killings to bring to justice the perpetrators of the massacre and those who gave them orders. They also denounced international inaction over Syria, saying it has allowed Assad and his allies to continue to commit crimes against the Syrian people with impunity.

Families of the disappeared described to the AP the years of anguish and fruitless searching, punctuated by waves of false hope.

One man, Maher, said he still hopes his brother, missing since 2013, is alive and will one day be released. Its a new blow every time a prisoner release is announced, and his brother is not among them.

One tries to adapt throughout the years, but the wound reopens with every report that comes out, he said, speaking on condition that he be identified only by his first name.

His brother vanished while bringing home food aid from the U.N. agency that helps Palestinian refugees, known as UNRWA. Maher said hundreds of people were arrested while going to collect food boxes, so many that they became known as death boxes.

Hoping to avoid arrest, people would send the elderly to collect the boxes, he said. His brother went four times; on the fifth, he was detained.

If confirmation emerges that he is dead, the wound would be cut wide open, and the real misery would start then, Maher said.

A racket of war profiteers preys on families, extorting large sums of money from them with false promises of an eventual release of missing relatives.

Days after the video showing the killings came to light, Syrian President Bashar al-Assad issued an amnesty for hundreds of prisoners. Families flocked to a Damascus square, holding up pictures of missing relatives and pleading for information, according to videos on pro-government media outlets.

Among them, profiteers circulated, telling families they could get their loved ones names on the release list in return for 50 million Syrian pounds nearly $13,000 Al Abdullah said.

These are all lies, he said.

Still, some families pay, desperate for any information.

The walls of her room are covered with pictures of her father, missing since he was taken from his home in 2013.

Its crazy how after 11 years, and after we have left the country, the regime can still control us and control our mental and physical health, Wafa said. They control our existence. Trump Organization is seeking to stall its fraud trial,...

Despite my health challenges, I choose to heal

How a Russian invasion of Ukraine could affect the...

Venezuelan opposition to file complaint for attack on leader

Bisnow CEO Will Friend Killed by Lightning on Fourth...

Factbox: FACTBOX: Europe’s plan to use less gas this...

DeSantis touts ‘freest state’ of Florida during appearance at...

Now is the time to drive investment and nearshore...

Afghan cyclist pursues her dreams in U.S. after fleeing...

Putin believes ‘doubling down’ key to winning in Ukraine,...

Monkeypox cases on the decline in the nation’s largest...

India Court Set to Hear Petition for Hindus to...

A remarkable Republican statement on the Ukraine invasion