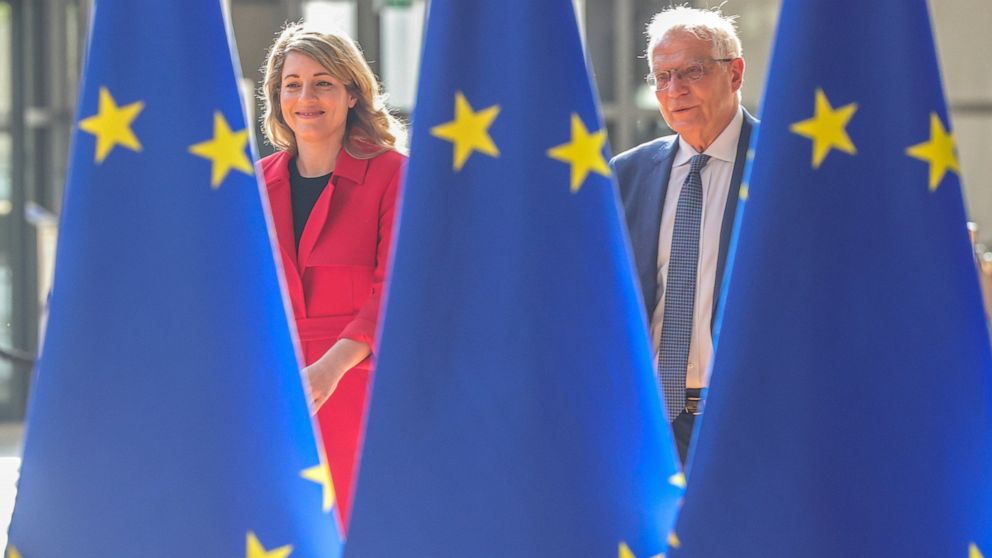 BRUSSELS — The European Unions efforts to impose a new round of sanctions against Russia over the war in Ukraine appeared to be bogged down on Monday, as a small group of countries opposed a ban on imports of Russian oil.

Since Russia invaded on Feb. 24, the bloc has implemented five rounds of sanctions on Moscow. President Vladimir Putin, senior officials, more than 350 lawmakers and pro-Kremlin oligarchs were hit with asset freezes and travel bans. Banks, the transport sector and alleged propaganda outlets were targeted.

What could have taken years in the past has been achieved in less than three months relative light speed for the 27-nation bloc. But limiting Russias energy income by weaning their dependency off its oil not to mention gas supplies is proving a tougher nut to crack.

The EUs executive branch, the European Commission, proposed on May 4 a sixth package of war sanctions that included a ban on oil imports from Russia. European Commission President Ursula von der Leyen conceded at the time that securing the agreement of all will not be easy.

Hungary is one of a number of landlocked countries that are highly dependent on Russian oil, along with the Czech Republic and Slovakia. Bulgaria also has reservations. Hungary gets more than 60% of its oil from Russia, and 85% of its natural gas.

We will do our best in order to deblock the situation. I cannot ensure that it is going to happen because positions are quite strong, EU foreign policy chief Josep Borrell told reporters as he arrived to chair a meeting of the blocs foreign ministers in Brussels.

Muddying the waters is Hungarian Prime Minister Viktor Orbans relationship with Putin. Orban is widely considered to be one of the Russian leaders closest European allies. He has only reluctantly supported previous EU sanctions, including a phased-in embargo on Russian coal.

Since taking office in 2010, Orban has deepened Hungarys dependency on Russian energy and says its geography and energy infrastructure make an oil shutdown impossible. His EU partners are at odds over what they believe is driving his reluctance to target oil.

The whole union is being held hostage by one member state, Lithuanian Foreign Minister Gabrielius Landsbergis said. He said that the European Commission’s proposal offered members a phaseout of Russian oil until Dec 31, 2024, and that everybody expected that this would be enough.

But his Irish counterpart, Simon Coveney, acknowledged that these are difficult, difficult issues for some countries, and he added: Lets not focus on obstacles and negatives today.

At the same time, Coveney said, we need to get on and do this. We need to send a very clear signal to the Kremlin and to Moscow that the cost of their continuing war in Ukraine, which is completely unjustifiable, will continue to increase.

For now, the ball is in Hungarys court, as the most vocal member of those opposed. Officials have said that Orban appears to be seeking EU money for energy infrastructure investment. Any compromise is only likely to be found in his talks with von der Leyen, not between ministers.

The oil standoff raises questions about whether the EU has reached the limits of its unity on sanctions. Targeting Russias gas sector, on which many more countries are dependent, is likely to prove even tougher.

Officials said before Mondays meeting that a political agreement is likely to be found on a fourth tranche of money to help supply weapons to Ukraine. It would bring to 2 billion euros ($2.1 billion) the total sum available to fund the purchase of arms and other nonlethal assistance. Is Musk Getting Cold Feet About Acquiring Twitter? (Podcast)

Naomi Judd had been open about “severe” depression before...

China coal output hits record in Dec and in...

Trump pushes back at those saying he’s lost grip...

‘Mariupol is a graveyard’: Evacuees recount terror of Russian...

Kinder chocolate recalled in US over salmonella concerns

Brian Kilmeade shares the goal of ‘One Nation’ with...

He predicted US inflation would rise. Hear what he...

Open: This is “Face the Nation,” April 3

President Biden to speak on voting rights in Atlanta

Lula’s Return: From Prison to Presidency?

Tom Parker: A look back at his career

China warns of ‘worst consequences’ for any country that...

‘Rolling back the years’ – how new training camp...

Ukrainians stranded in Hawaii get help from canoe paddlers

Marvel's She-Hulk release date may have been leaked by Disney