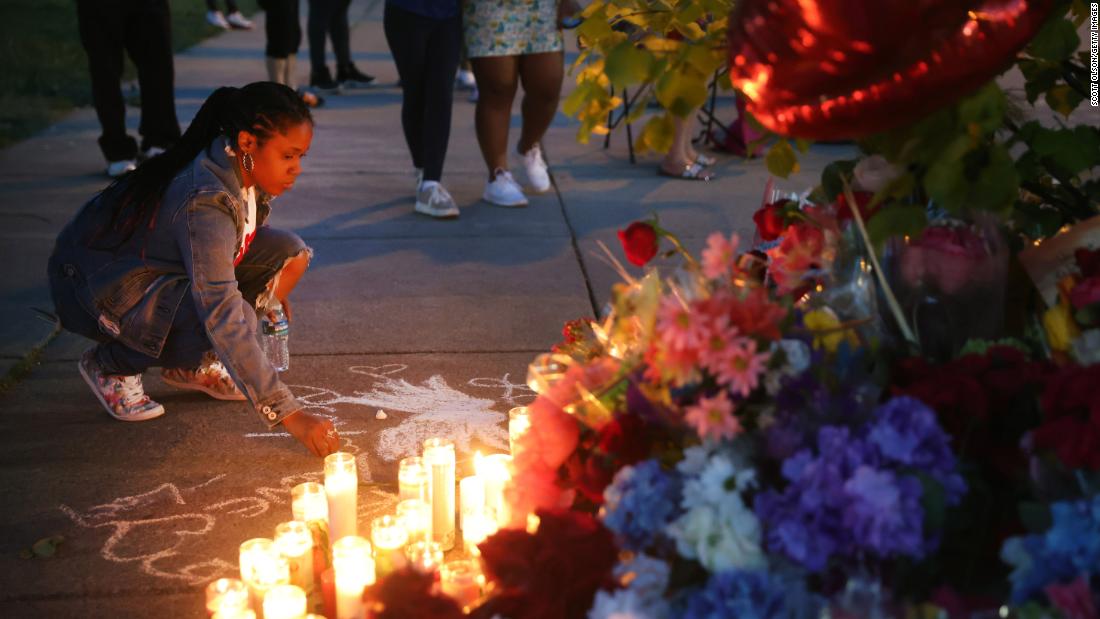 (CNN)Just outside a supermarket in Buffalo, residents have been gathering since Saturday to mourn and honor those lost after a mass shooting left 10 people killed and three others wounded.

The shock and pain felt by those in the community and around the nation has only been intensified by what authorities believe to be the motive of the shooting, with more details emerging of a racist manifesto allegedly written by the 18-year-old White man suspected of traveling nearly 200 miles from his home to attack a predominantly Black neighborhood.

Saturday’s shooting was a “straight up racially motivated hate crime from somebody outside of our community,” Erie County Sheriff John C. Garcia said. “This was pure evil.”

The gunman opened fire outside a Tops Friendly Markets store Saturday afternoon, shooting and killing several people in the parking lot before entering the building. He exchanged gunfire with an armed security guard — who was killed — and shot more individuals inside, then exited and surrendered to police.

Of the 13 people shot, 11 were Black, officials said. And locals say they are working through the grief and disbelief of such a horrifying crime based on racial animus.

“My family shops here on Saturday mornings. That could have been our mothers, our grandmothers, our aunts, our uncles. And it was us. It was us,” Kelly Galloway told Spectrum News NY1.

Buffalo Mayor Byron Brown spoke to worshippers at a church Sunday about their loved ones lost, and said “their lives and their example should be examples to us, that we have to love more, we have to care about each other more because we don’t know when our time might come.”

Those at the supermarket “were going about their daily lives, left in the morning and had every expectation that they’d be home at night with their families,” he said. “Many of us stood shoulder to shoulder yesterday in pain, like all of us are in pain, dealing with the aftermath of this horrible, racist, violent attack on our community.”

More about alleged manifesto is learned

Local and state officials — as well as the FBI and ATF — are pursuing additional information into the details of the shooting as well as the gunman’s intent.

“We continue to investigate this case as a hate crime, a federal hate crime and as a crime perpetrated by a racially motivated, violent extremist,” Stephen Belongia, special agent in charge of the FBI Buffalo field office, said at a press conference on Sunday.

The gunman began a livestream of the attack, and livestreaming service Twitch said in a statement to CNN the video was removed less than two minutes after the violence began.

Buffalo Police Commissioner Joseph Gramaglia said Sunday authorities will be “looking at extensive digital platforms, computers, phones, cameras and anything else that comes into play in this investigation.”

“The evidence that we have uncovered so far makes no mistake that this is an absolute racist hate crime. It will be prosecuted as a hate crime,” Gramaglia said. “This is someone who has hate in their heart, soul and mind.”

One potential piece of evidence includes a 180-page manifesto attributed to the suspect and posted online just before the attack. CNN independently obtained the document shortly after the mass shooting and before authorities released the name of the suspect, and law enforcement sources have told CNN the manifesto’s description of guns matches the weapons the suspect used.

The suspect allegedly details in the manifesto how he had been radicalized by reading online message boards, and described the attack as terrorism and himself as a White supremacist. He subscribed to a “great replacement” theory — the false belief that White Americans were being “replaced” by people of other races.

The gunman allegedly chose to attack the supermarket in Buffalo because it was in a majority-Black ZIP code within driving distance of where he lived, and researched what time it would be busiest, according to the manifesto.

The man arrested for the shooting is from the town of Conklin, a three-and-a-half-hour drive from Buffalo.

The manifesto also states the suspect bought the main gun he used, a Bushmaster XM-15, from a gun store before “illegally modifying it.”

Erie County District Attorney John Flynn told CNN “we are obviously going through (the manifesto) with a fine-toothed comb and reviewing that for all evidence.”

The suspect faces a maximum of life in prison without parole if convicted.

Residents are still in shock about the attack in the heart of the Kingsley and Masten Park neighborhoods, at a place so familiar in their daily lives.

The 13 people killed or wounded in the shooting have been identified by authorities, and their ages range from 20 to 86.

One of the victims, Geraldine Talley, 62, was doing her regular grocery shopping with her fiancé on Saturday when she was shot and killed, her niece Lakesha Chapman told CNN.

“She’s sweet, sweet, you know, the life of the party,” Chapman said. “She was the person who always put our family reunion together, she was an avid baker … mother of two beautiful children.”

“We’re outraged,” she added. “This is not, obviously, the first racially-triggered attack in America. However, it is the first that hits our home.”

New York Gov. Kathy Hochul has announced $2.8 million in funding for the victims and their families, according to a statement from her office.

“The entire world is watching how we will come together as New Yorkers to overcome this unthinkable tragedy. Buffalo, my hometown, is the City of Good Neighbors and New York State will be good neighbors for them,” she said.

And with the store closed as authorities investigate the scene, Tops Markets is providing free transportation to those in the area affected and said it is working closely with a representative of the Masten District in securing free food and supplies for those in need.

The supermarket itself is located in a so-called “food desert” — where access to fresh foods and groceries is limited — and “served as the lone supermarket within walking distance for many Buffalonians,” according to Gov. Hochul.

Mayor Brown emphasized the importance of the supermarket to the community at a news conference Saturday, saying this location is “near and dear” to his heart.

Hamilton says he was racially abused at school

Your job or your caregiving responsibilities? This company doesn’t...

US Economy on Election Day: Where It Stands and...

Camilla, Duchess of Cornwall talks about marriage to Prince...

Should Lineker be in the greatest World Cup XI?

Guatemalan journalist calls charges against him a ‘set-up’

Before monkeypox outbreak, US officials knew for years they...

Bank of France Flags Uncertainty as Growth Slows and...

IP and cybersecurity disputes are top legal concerns for...

Why’s It So Hard to Predict a Recession? Big...

Covid: Fact-checking the doctor who challenged the health secretary

Opioid overdose deaths among teens have skyrocketed since 2019

Is revenge bedtime procrastination keeping you up? Experts share...

Zoom will now let you live stream your boring...

Camille Herron put her ‘heart and soul’ into breaking...

Canada’s national police force admits use of spyware to...

Ukraine War: The Donbas body collector who has lost...

FDA orders all Juul e-cigarettes off the market

Boom will build a supersonic jet factory in North...