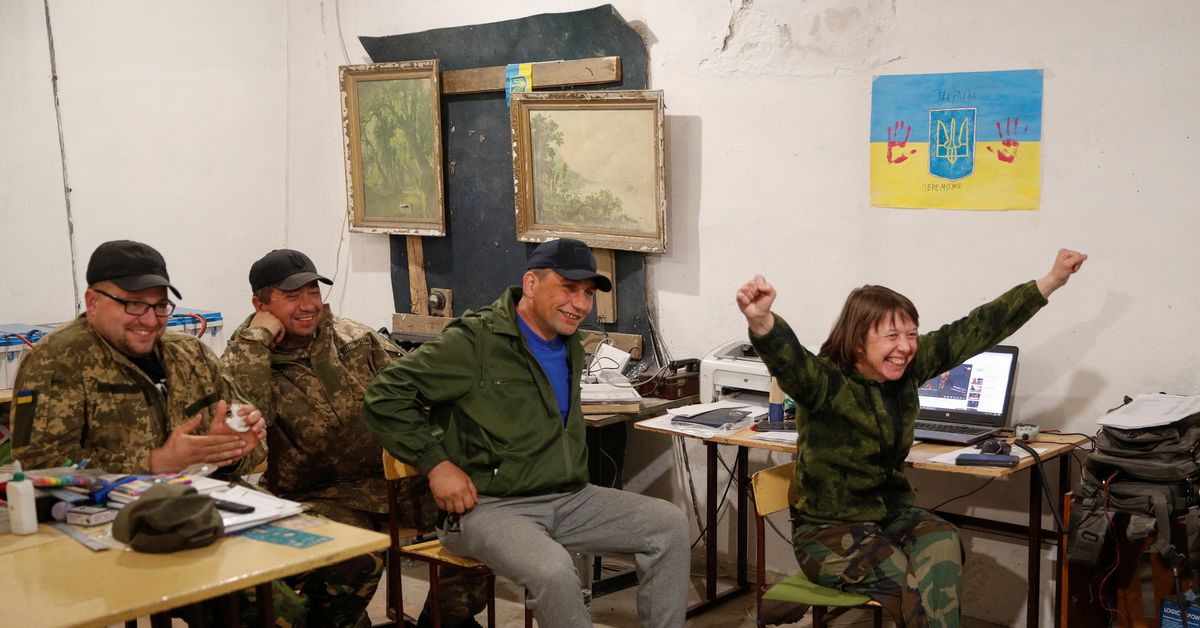 KYIV, May 15 (Reuters) – Proud Ukrainians revelled in their Eurovision Song Contest victory on Sunday, renaming a train route in its honour as they hoped for victory in their grinding war with Russia.

Ukraine’s Kalush Orchestra triumphed in Italy on Saturday with their entry “Stefania”, a song fusing rap with traditional folk music that was a tribute to band frontman Oleh Psiuk’s mother. read more

“We were very happy with Ukraine’s victory, and we hope that we will win not only at Eurovision,” Liubov Savinkova, a Kyiv resident, said in an obvious reference to the war.

Russia’s Feb. 24 invasion has killed thousands, forced millions from their homes and devastated the port city of Mariupol.

She said she was deeply moved by the huge show of European support for Ukraine and by the band’s plea at the end of their performance for help in Mariupol and the Azovstal steelworks.

Russia has almost fully captured the devastated port city, but a pocket of Ukrainian resistance is holding out in Azovstal.

“I was overwhelmed with emotions when Iceland came out with Ukrainian flags, and also when Kalush spoke for Azovstal,” Savinkova said.

The band published a new music video for the track on Sunday showing Ukrainian servicewomen rescuing children from shelled and ruined towns.

The front man’s mother Stefania, in televised comments, described going to the local market in her hometown and, bewildered, being asked by passersby to pose for photographs.

“I didn’t connect it to myself, that the song was written for me. I thought someone had made a mistake and meant his girlfriend Sasha and got the names mixed up,” she said.

Psiuk’s sister Iryna described watching the televised contest with her mother in the town of Kalush, the band’s hometown in the foothills of the Carpathian Mountains in Ukraine’s western Ivano-Frankivsk region.

“She was really worried. We wept. We sat up until half past six, watching the press conference…. Emotions were off the scale, we didn’t believe that our little town of Kalush would bring Ukraine victory this year in the Eurovision,” she said.

The head of the railway service announced that the number 43 train from Kyiv to Ivano-Frankivsk will be renamed the Stefania Express to honour the victory.

Train stations in Kyiv, Kalush and Ivano-Frankivsk will play the song when the train pulls in, he said.

Mykola Latsiuk, a bartender in Kyiv, said that the band’s participation was more important than their victory.

“The most important thing is that the guys went and performed. They supported us, and we supported them. It is important,” he said. Airman to be sentenced in Arizona in Mennonite woman’s...

Container ship finally freed after being stuck in Chesapeake...

China wants to censor all online comments and hold...

Large U.K. Companies Should Be Forced to Make Ethnicity...

Rangers stave off elimination with comeback victory over Penguins,...

Ukraine: The spy war within the war

Elden Ring Isn’t Made for All Gamers. I Wish...

Philips reveals OLED807 TV and it might be one...