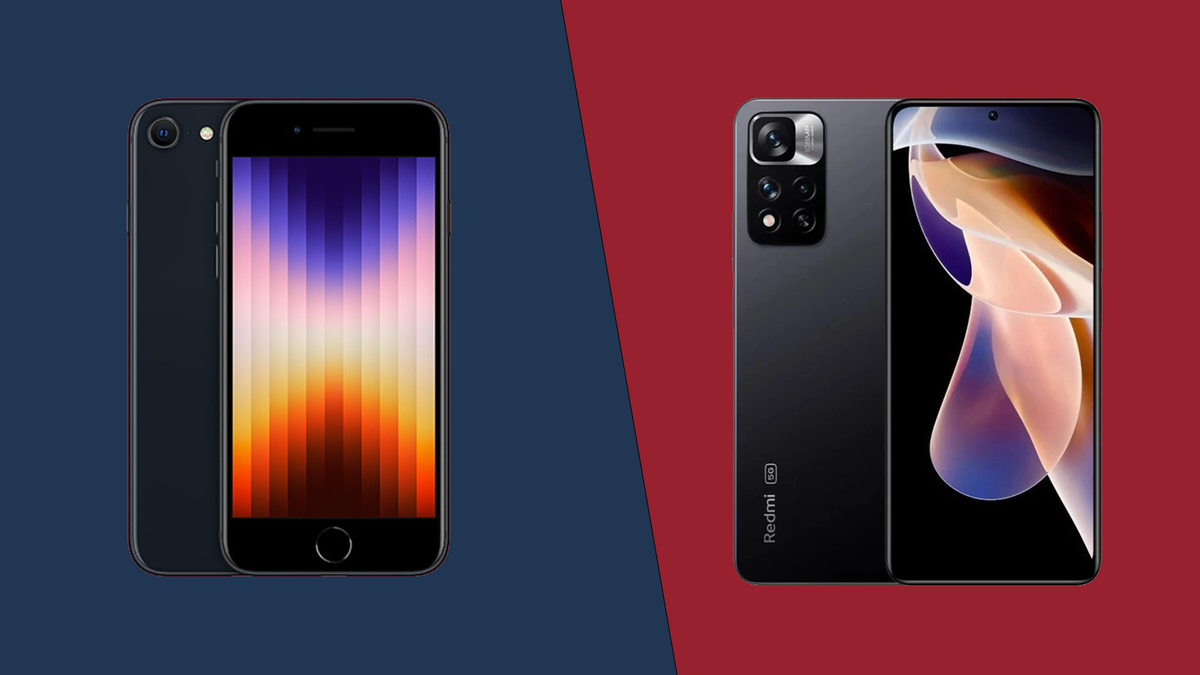 If you’ve got around $400/£400 burning a hole in your pocket, and you’re after a mid-range smartphone to buy, then the iPhone SE (2022) and the Xiaomi Redmi Note 11 Pro 5G have to form part of the conversation.

So which of the two represents the better buy? This is a tricky comparison, given that the two phones look and perform completely differently from one another.

Both phones have their share of perks and quirks, but we’ve arrived at a clear winner – for most people, at least. Let’s take a closer look.

There are several Xiaomi Redmi Note 11 Pro 5G configurations, but they’re not all equally available. The base model, with 4GB RAM and 64GB storage comes with a quoted price of $329, even though it isn’t available in the US. The more common model is one that comes with 6GB RAM and 128GB storage, and that one has a reference price of $349/£319. There’s also a 128GB/8GB model for $379, but it’s not on sale in many regions.

The Redmi Note 11 Pro is certainly the cheaper phone of the two, but its availability is a bit of a mess compared to the iPhone SE (2022).

The iPhone SE (2022) looks and feels much like the 5-year-old iPhone 8, which is positively ancient in smartphone terms.

We quite like how different it feels from every other phone on the market, but let’s not pretend here. It’s an outdated approach, and we wish Apple had shifted the range to a fresher design language.

Compare that to the Redmi Note 11 Pro 5G, which is a far more modern yet also more anonymous-looking handset. We dig the glass back, which isn’t a common feature in an Android phone of this price, but the frame is made of squared-off plastic as opposed to aluminum, like on the iPhone SE.

While the iPhone houses a fingerprint sensor in its dedicated Home button, the Redmi stashes its own sensor in the power button on the right-hand edge. It’s nice and fast, but no-one beats Apple at this kind of thing.

Both phones give you stereo speakers, which is great to see at this price.

One final advantage for the iPhone SE is that it packs an IP67 rating, while the Redmi Note 11 is stuck at a lowly IP53. The SE will stand up to showers and dusty pockets better.

In a nutshell, then, the Redmi is bigger and more modern, but the iPhone is better built and uses more premium materials.

With such a small body and huge bezels, the iPhone SE (2022) display was never going to be huge. At 4.7-inches, however, it’s positively tiny.

What’s more, it’s only an IPS LCD panel, which means it lacks the eye-popping color and contrast of its OLED rival. It doesn’t get too sharp, either, with a resolution of 750 x 1334 nor does it get particularly bright at 625 nits, while its refresh rate peaks at a lowly 60Hz.

Bigger, sharper, brighter, smoother, and more vibrant. It’s just plain better than Apple’s dated display, as good as that was in its heyday.

You might assume that the Redmi Note 11 Pro 5G has the camera round in the bag, especially if you were simply going by the facts and figures.

But in terms of actual image quality and reliability, the iPhone SE (2022) is far ahead. Thanks to Apple’s unmatched image processing skills, in conjunction with the A15 Bionic chip, the iPhone SE turns out shots that our reviewer found to be “pleasing to the eye, color-accurate, and often beautiful”.

“Overall, the photo quality on this mid-range phone can still rival that of competitor handsets selling for almost twice as much,” they concluded.

Smart HDR 4 and Deep Fusion techniques ensure that these shots look way better than you might expect from such humble hardware, additionally, Apple remains the undisputed king of video capture right up to 4K 60fps.

By comparison, the Redmi Note 11 Pro 5G underwhelms, given its showy hardware. “We captured a few too many blown-out skies, and it frequently fumbles dusk scenes,” observed our reviewer.

While it can still capture great results, it simply wasn’t as consistent as we would have liked. You’ll need to work with the settings more, whereas the iPhone SE is blissfully fire-and-forget.

Still, at least you can take ultra-wide shots with the Redmi, courtesy of its dedicated 8MP ultra-wide camera. Sure, the results are a little soft, there’s also an obvious drop in dynamic range, and you can’t use the Night mode at the same time – but at least the option is there, unlike with the iPhone.

The iPhone absolutely trashes the Redmi when it comes to video recording, capturing superior footage at up to 4K. The Redmi can only manage 1080p.

There’s no competition on the power front either, with Apple’s phone again taking a clear win. The iPhone SE (2022) runs on the Apple’s A15 Bionic chip, which is the same one that powers the iPhone 13 family.

We found the latter to be relatively slow, even in mid-range Android smartphone terms. The Redmi’s specs also explains the phone’s hamstrung video capture capabilities, as mentioned in the previous section.

Needless to say, while the iPhone SE can run the likes of Fortnite and Genshin Impact at full whack, the Redmi Note 11 Pro 5G is more of a medium-to-low kind of a device.

Another win for the iPhone comes with the software provision. With iOS coming as standard – just like every other iPhone – you know that you’re getting a clean, stylish OS with guaranteed timely updates.

The Redmi Note 11 Pro 5G comes with MIUI 13, Xiaomi’s clunky custom UI, sitting over the outdated Android 11 OS. Our reviewer called it “for the most part… pretty inoffensive”, which is damning with faint praise if we ever heard it.

In particular, we found that MIUI aggressively closed apps running in the background, which was particularly annoying for background audio apps.

Throw in 5G connectivity, and it’s not surprising that our reviewer was often unable to get through a full day on a single charger. It generally lasted 12 hours before giving up the ghost.

By contrast, the Redmi Note 11 Pro 5G packs in a way larger 5,000mAh battery, which lasted a full day of heavy usage without running out of juice. This was with the display set to 120Hz, too.

The Redmi wins when it comes time to recharge, too. Xiaomi has bundled in a rapid 67W charger, which will take you from 1 to 48% in 15 minutes.

Apple hasn’t given you any charger with the iPhone SE, and it only supports up to 20W in any event. On the plus side for Apple, the SE does support 7.5W wireless charging, unlike the Redmi.

While the iPhone SE (2022) might look like a much more dated device than the Redmi Note 11 Pro 5G, its performance, main camera, and software are on a whole other level.

All in all, we have to give the edge to the iPhone SE (2022) in a straight mid-range face off. While both of these phones feature fundamental compromises, and while the Redmi Note 11 Pro 5G is undoubtedly cheaper, it’s the iPhone SE (2022) that’s likely to provide more consistency and more value over the length of ownership.

How to Use Tech to Perform Acts of Kindness

Elon Musk Is Close to a Deal for Twitter...

Shanghai to start easing lockdown after another mass testing

Whipped: Why MPs are getting out of line

Bruce Willis diagnosed with aphasia, stepping away from acting

Analysis: What went wrong for the Conservatives in London?

Ocasio-Cortez: Biden speech ‘left a little bit to be...

‘Close the loopholes’: The Pentagon’s next front in its...

How Russia is using hunger as a weapon in...

Twitter’s new features may cure your fears about Elon...

6 hospitalized, 1 in critical condition, after shooting at...

First on CNN: Damage to Snake Island, where Ukrainian...