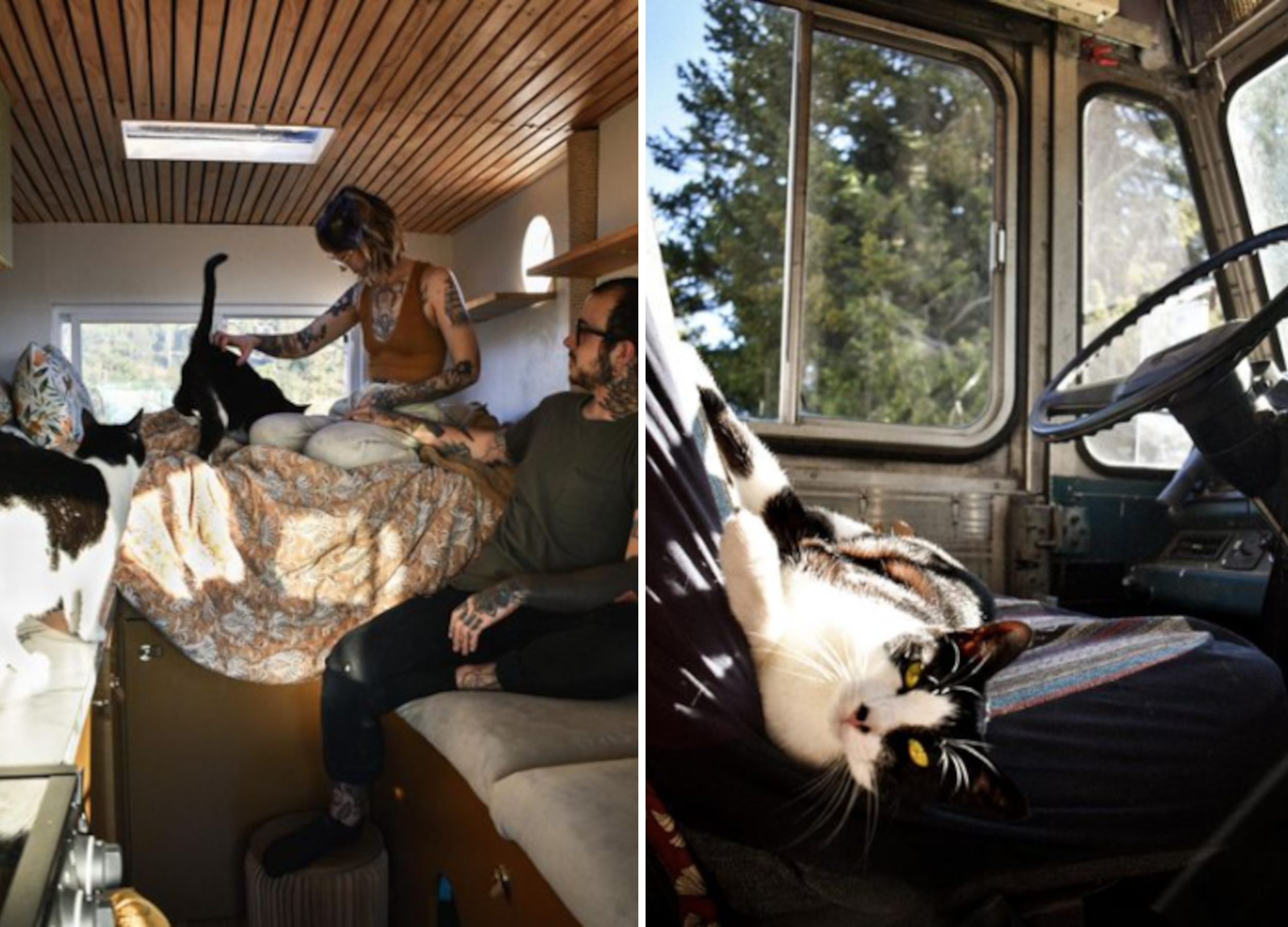 In recent years, the popularity of what has been dubbed “van life” has boomed. But one couple has gained viral attention after taking to the road with some unusual companions.

Chelsea and Nick Hill are from Boise, Idaho, and they share their life on the road on TikTok and Instagram under the handle ‘wildinthehills.’

In their renovated van, they have been exploring full-time for nine months now. But the Hills have given van life a twist: bringing along their three cats to share the adventure.

According to the U.S. Census Bureau, around 140,000 vans, RVs or boats were counted as housing units in 2019. The RV Industry Association (RVIA) reports that more than 11 million U.S. households own an RV, with an upswing in the last 10 years driven by younger people.

The hashtag #vanlife boasts more than 12 million posts on Instagram, with people around the world sharing their life on the road with fans.

Chelsea told Newsweek: “Our life was changing to where we decided we could travel more with our day jobs, but we hated leaving our cat babies behind. So we decided to take on van life and bring our cats anywhere and everywhere with us.”

A picture of Chelsea and Nick Hill inside their custom-built van with their three cats.wildinthehills/Instagram

“Your van build is so beautiful! And the kitties,” said one commenter on TikTok. While another said: “The cats are living the life.”

In a series of videos, the couple has shared how custom-built bubble windows allow their cats to peek outside safely. They even revealed how they solved the litter-tray issue by creating a custom under-bench “litter box room.”

“Our kitties are older and are looking to sunbathe their days away,” explained Chelsea. “So we installed a skylight above a memory foam mattress on a fixed bed area for the best sunbathing.”

The couple also added an outdoor awning with a zip-on tent so the cats can safely venture outside, and intentionally chose a tall van to accommodate high shelves and a built-in scratching post.

“We also installed bubble dome windows so the cats can see outside better, and all the fabrics we chose are the cats’ favorites,” said Chelsea.

A picture of Arthur the cat sitting in the driver’s seat of the Hills’ custom-built van that they share with their three cats.wildinthehills/Instagram

But traveling with cats in tow does have its challenges, too. “The biggest thing for us is that we have to keep our driving days to less than five hours at a time,” said Chelsea. “The cats start to get restless if we drive any longer than that so we need to make sure we plan our drives accordingly.”

In the comments to one video, a viewer drawn to the couple’s decision to take on van living with their pets wrote: “I’ve been denying my desire to buy a van because of my two cats but this is so inspiring, I think I might do it.”

Later, the couple replied: “Totally do it! We built the van specifically for the cats to make sure they would love this life too.”

“We wanted to share our lifestyle to prove that you can do van life with cats,” explained Chelsea. “And to show that cats are way cooler than they are given credit for.”

Planning for sunny days ahead, the Hills plan on spending the summer months around the Pacific Northwest, and possibly making their way to Canada later in the year.​​ Man jailed for not granting Jewish divorce to wife

70,000 without power in Texas due to massive storm

Northern Ireland Protocol: What do voters think of it?

Body of young boy found by mushroom hunter in...

Buffalo supermarket victim Kat Massey to be laid to...

Newt Gingrich, Brian Kilmeade say country is at a...

Dream It, Do It: This Network Helps Cast Members...

This new gaming phone has better specs than the...

The Samsung Galaxy Watch 4 could soon make the...

The super-versatile Instant Pot is back to its lowest-ever...

Refugee kids share struggles of coming to the U.S.

Trudeau: Canada will take as many Ukraine refugees as...

Jon Stewart under fire for displaying ‘super-woke’ views in...

Has a cryptic Instagram shot revealed the Thor: Love...

Why you shouldn’t trust the Gotham Knights release date...

Biden to tackle Ukraine conflict and U.S. inflation in...

Tiger sharks are migrating into new areas along the...

Reports of sexual assaults at US military academies increase...

Ellen Barkin testifies against Johnny Depp: A look at...

US, S Korea urge North’s return to talks after...

Amber Heard Says Johnny Depp Did Drugs With Her...