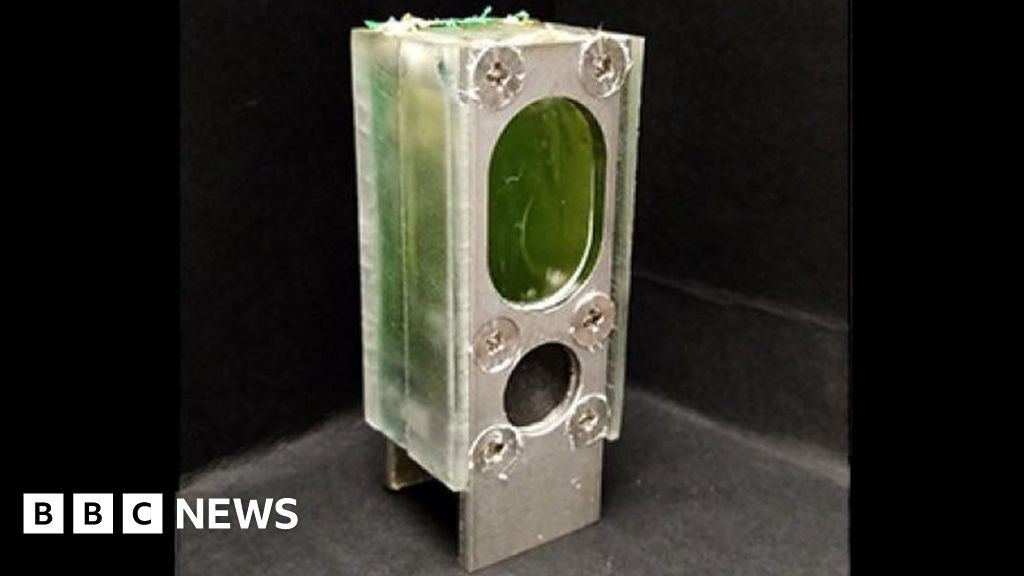 Image caption, The algae harvests energy from the sun through photosynthesis which generates an electrical current

Researchers have used algae to power a computer continuously for a year.

The University of Cambridge said the system was a similar size to an AA battery and contained a non-toxic species of blue-green algae called synechocystis.

The algae “naturally harvests energy from the sun through photosynthesis”, the university said.

Researchers believe the system “has potential as a reliable and renewable way to power small devices”.

They said the system was made of “common, inexpensive and largely recyclable materials”.

“This means it could easily be replicated hundreds of thousands of times to power large numbers of small devices as part of the Internet of Things,” the team said.

The Internet of Things is a vast and growing network of electronic devices that each use a small amount of power that collect and share real-time data via the internet, like smartwatches.

The electrical current generated through photosynthesis interacts with an aluminium electrode which is used to power the microprocessor.

Prof Christopher Howe, of the University of Cambridge’s department of biochemistry, said: “Our photosynthetic device doesn’t run down the way a battery does because it’s continually using light as the energy source.”

In the experiment, the device was used to power an Arm Cortex M0+, which is a microprocessor used widely in Internet of Things devices.

Cambridge-based microprocessor design company Arm collaborated with the Cambridge researchers on the project.

Dr Paolo Bombelli, of the University of Cambridge’s Department of Biochemistry, said: “We were impressed by how consistently the system worked over a long period of time – we thought it might stop after a few weeks but it just kept going,”

Opinion: The real reason America could buck the global...

Katica Roy on Keys to Closing the Gender Pay...

Reynolds to focus on inflation, schools in response to...

German retirees to get hefty pension increase in July

Family of man shot by police: Release all videos,...

Placebo effect the true cause of many reported COVID-19...

Democrats praise Biden on CBS, ABC and CNN for...

NFL player Dwayne Haskins dies after being hit by...

St Athan residents 'in the dark' over contaminated water