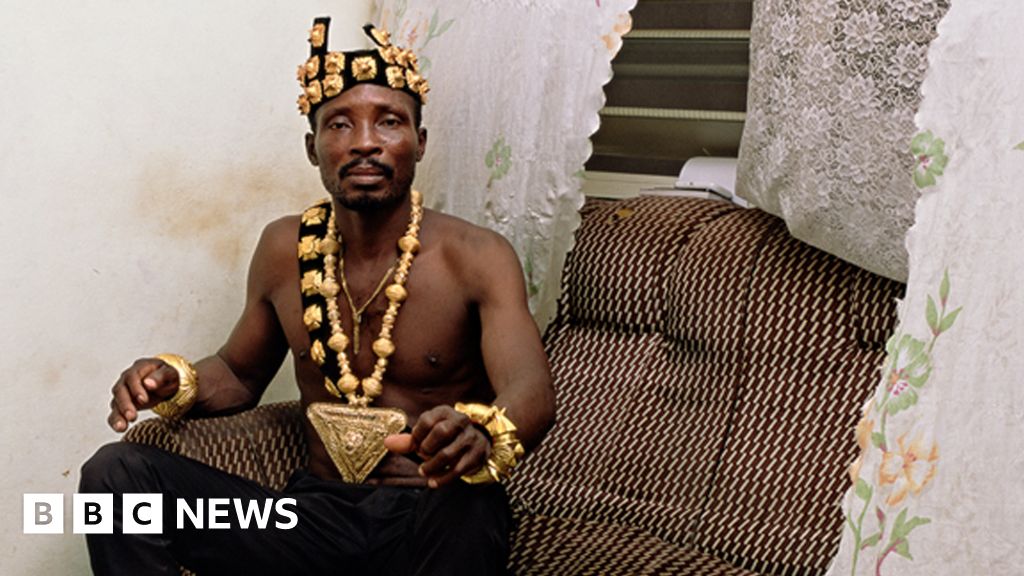 Ms Lawson, from Rochester, New York, was awarded the £30,000 prize on Thursday at a ceremony at The Photographers’ Gallery in London.

The annual award recognises artists and projects for their contributions to the world of photography over the past year.

The photographer, who is a professor of visual arts in the Lewis Center for the Arts at Princeton University, cast models to pose in a style reminiscent of family photographs.

While the majority of the models are unrelated, she describes them as a “mythological extended family” in images that provide “portals” into other worlds.

“Interrogating the position of the black body in visual culture and playing with tropes such as family portraiture, artifice and nature, [Lawson] takes the personal and makes it political,” says Anne-Marie Beckmann, director of the Deutsche Börse Photography Foundation.

Image caption, Emily and Daughter, 2015. Pictured on display at The Photographers’ Gallery, London

Her work is on display at The Photographers’ Gallery, alongside the other shortlisted artists – Anastasia Samoylova, Jo Ractliffe and Gilles Peress – until 12 June 2022.

Here is a selection of work by the three other shortlisted artists.

Image caption, Whatever You Say, Say Nothing: from the chapter, The Last Night Microsoft Exchange servers are being hacked to deploy ransomware

Fox networks to televise World Baseball Classic in US

Fauci says he expects to retire by end of...

US issues new sanctions against North Korea after missile...

Shell CEO to step down as oil giant looks...

No whisky for chancellor Jeremy Hunt giving his Autumn...

The Morning After: This is the PlayStation VR2 headset

Light Side or Dark Side of the Force? It’s...

Officer who killed woman in Washington state had been...

China’s Pinduoduo to Enter US Market in First International...

Ray Dalio Gives Up Control of Bridgewater in Final...

Should San Bernardino Secede From California? Americans Weigh In

Travelers to New Zealand will no longer need to...

Windows 11’s best new feature will only be for...

Google will allow users to limit ads about parenting,...

What’s behind the latest Manchin drama

60 Million Barrels of Oil Stocks Will Be Deployed...

Matthew McConaughey at the White House on gun reform:...