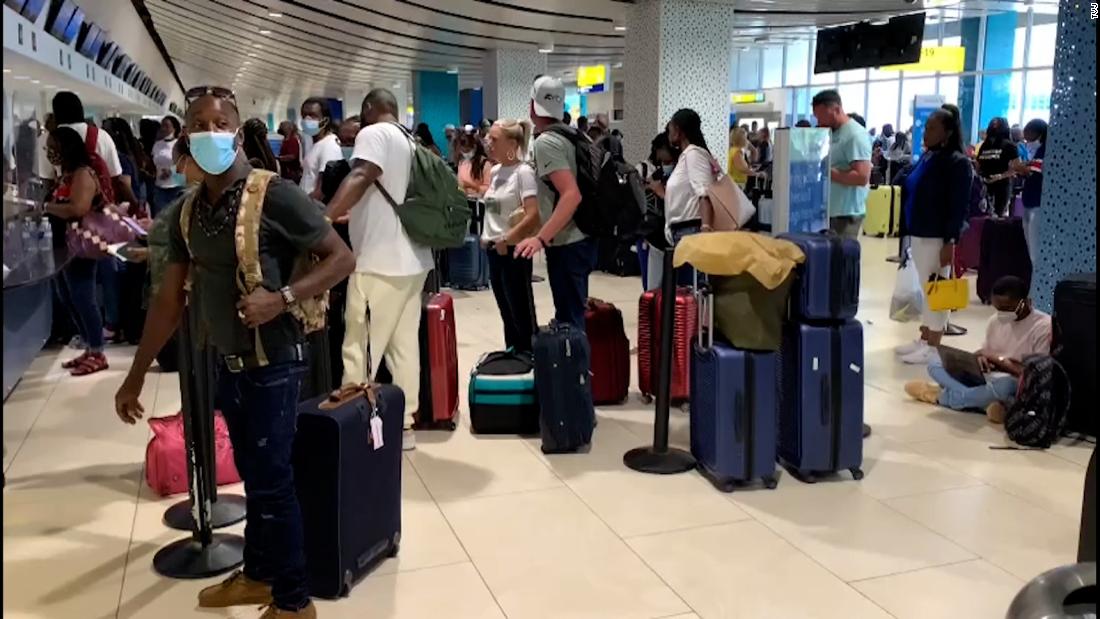 (CNN) Air traffic control came to a stop for parts of Thursday morning and afternoon in Jamaica, forcing flight cancellations and leaving thousands of frustrated passengers stranded there or unable to reach the Caribbean island.

MBJ Airports Limited, the operator of Sangster International Airport near the popular resort destination of Montego Bay, confirmed in a news release to CNN that flights were canceled on Thursday morning “due to the suspension of air traffic services.”

American, Delta, JetBlue, Southwest and United flights were canceled, among others.

It was a similar story at Norman Manley International Airport in Kingston, the capital city. Arrivals started being canceled around 11:30 a.m., and departures were canceled starting at 12:19 p.m.

Kurt Solomon, president of Jamaica Air Traffic Controllers Association, told CNN that flights were resuming as of 5 p.m. local time on May 12.

Robert Nesta Morgan, minister without portfolio with responsibility for information in the Office of the Prime Minister, posted a news release on his Twitter account confirming that flights were resuming.

“The Jamaica Civil Aviation Authority (JCAA) wishes to advise the public that, as dialogue progresses between the Authority and its key stakeholders, particularly the Jamaica Air Traffic Controllers Association (JATCA), air traffic services are currently being restored,” the release said.

Sharon Hislop, manager of commercial development and marketing at Sangster, told CNN that the airport was notified Thursday morning that the air traffic control center in Kingston didn’t have enough support for air traffic because of “limited staffing.”

The JCAA then decided to suspend air traffic services and flights, Hislop said.

CNN Travel reached out to the JCAA for comment via email and phone on Thursday afternoon but had not received a reply as of 8 p.m. ET.

There were 32 scheduled commercial flights today at the international airport in Montego Bay, Hislop said. Before 10 a.m., only four of those flights were able to operate and 28 flights were canceled, she said.

Hislop estimated there were about 100 passengers on each flight affected by the suspension of services.

Shops at the airport were set to remain open into the night as some passengers were expected stay at Sangster overnight, Hislop told CNN.

Local media referred to the situation as a strike, though no officials contacted by CNN confirmed that was the case.

“That’s what we’ve been hearing, but we can’t know for sure,” Hislop said when asked whether a strike by air traffic controllers led to the limited staffing that in turn led to suspension of flights.

Solomon said “a contingency team” that was working Thursday morning at the Kingston Air Traffic Control Center was unable to continue and that team stopped. Solomon was unable to say why they stopped working.

The contingency team is made up of management personnel for air traffic controllers.

Solomon also told CNN there have been persistent equipment issues at the Kingston Air Traffic Control Center, and they have been ongoing for several years.

Justin Novak told CNN he was flying from Toronto to Montego Bay on Thursday when his flight was turned around 30 minutes before landing.

Novak says that the pilots didn’t say much except that they were forced to turn around.

“It was a tense return home. Mixed reactions but the majority visibly upset,” Novak said.

Novak was headed to Jamaica for an eight-day vacation with his wife. He’ll now lose two of the days because of the delays, he said.

“What I don’t understand Is apparently they knew this was happening but still let us board the plane.=,” Novak added. “We are rescheduled for 12 p.m. tomorrow [Friday, May 13], but who knows what will happen.”

Erin Fletcher Langen also hit problems on Thursday as she was flying from Fort Lauderdale, Florida, to Jamaica for work.

She was on a layover in Atlanta when the problems started. Her flight was delayed, then canceled and then there was hope when officials told them that Sangster (MBJ) reopened. Then it was officially canceled again.

“It was a roller coaster of emotions. When they said MBJ was opening, everyone cheered and clapped. When they said it was canceled (again), people weren’t necessarily mad, but sad. People were crying.” Fletcher Langen said.

She said people at the airport were saying how they haven’t traveled in a long time and a lot of people were traveling for weddings.

She said she hopes to fly out on a rescheduled flight on Friday.

American Airlines, which had more flights affected at Sangster than any other airline, issued a waiver for change fees to affected passengers.

“Due to air traffic service disruptions impacting air travel in Jamaica, Delta has issued atravel waiver for those whose travel may be impacted between May 12-13,” it said on its news website.

“This waiver allows the fare difference for customers to be waived when rebooked travel occurs on orbefore May 16, 2022 the same cabin of service as originally booked.”

You should check with your carrier if your flight was disrupted.

Dell overhauls Latitude, Precision laptop lineups for the next...

Apple had some bad news for iMac fans

Corgis and Cars: Queen’s pageant to be parade of...

What Is The World Trade Organization?

Pelosi announces she is running for reelection

Consumers defy inflation to support economy. For how long?

Hip to be smart: ‘Jeopardy’ savors run of super...

Turkey’s Erdogan says he will no longer talk to...

Is a virus we all have causing multiple sclerosis?

The CEO of Siemens USA on Why It’s Ok...

U.S. sending diplomats back to embassy in Kyiv on...

Ukraine to impose state of emergency

Google Photos makes it easier to pull text from...

Youngkin, Hogan send letter to Garland urging him to...

‘A real local presence.’ Family of Paislee Shultis has...

Saudis would develop bomb ‘the next day’ if Iran...

Dana Perino: We’re all living with the consequences of...