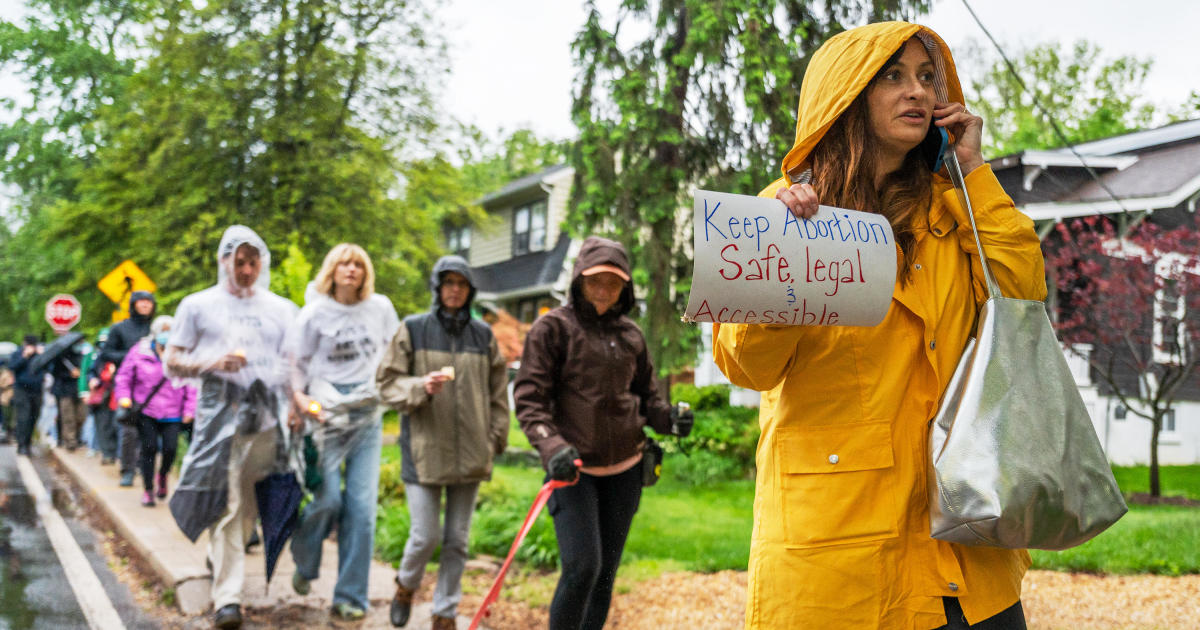 Washington — The Republican governors of Virginia and Maryland are calling on the Justice Department to enforce a federal law that bars picketing a judge’s house to influence their decision-making, as abortion rights supporters continue to protest outside the homes of conservative Supreme Court justices.

Governors Larry Hogan of Maryland and Glenn Youngkin of Virginia, who lead the states where some of the justices live, sent a letter to Attorney General Merrick Garland on Wednesday calling the recent demonstrations outside the houses of Chief Justice John Roberts and Justices Brett Kavanaugh, Samuel Alito and Amy Coney Barrett “markedly different” than those that occur on the steps of the Supreme Court.

They noted that under federal law, anyone who “pickets or parades” outside a judge’s residence “with the intent of influencing” him or her faces a fine or up to one year in prison.

“It is in your hands to ensure that applicable federal law is enforced to preserve the integrity of our American judicial system and the safety of our citizens,” Hogan and Youngkin told Garland.

The demonstrations outside the Maryland and Virginia homes of the justices were sparked by the leak of a draft majority opinion last week that indicated the high court may overturn its landmark 1973 Roe v. Wade decision, which legalized abortion nationwide.

Lacie Wooten-Holway walks with other activists to protest outside the home of Supreme Court Justice Brett Kavanaugh in Chevy Chase, Maryland, on May 7, 2022.

Craig Hudson for The Washington Post via Getty Images

Disclosure of the document, which the Supreme Court confirmed was authentic though not a final decision, prompted a flood of backlash against the GOP-appointed justices and a failed attempt by the Senate on Wednesday to advance legislation bolstering abortion rights at the federal level.

The draft opinion was written by Alito and circulated among the justices in February. Politico reported Wednesday that Alito’s opinion remains the court’s only circulated draft in the pending case involving a Mississippi law that bans abortion after 15 weeks of pregnancy, and none of conservative justices who sided with him initially — Justices Clarence Thomas, Neil Gorsuch, Kavanaugh and Barrett — have changed their votes.

In the draft, Alito called Roe “egregiously wrong,” and wrote the court would be returning the authority to regulate or prohibit abortion “to the people and their elected representatives.”

If the final opinion from the Supreme Court, expected in the coming weeks, strikes down Roe, at least half the states are expected to severely curtail abortion access, according to the Guttmacher Institute, a research organization that supports abortion rights.

While the Senate held a test vote Wednesday on its abortion rights bill, called the Women’s Health Protection Act, President Biden called on voters to elect wide Democratic majorities to the House and Senate in November’s midterm elections, which would enable Congress to pass and send the measure to his desk.

Mr. Biden also warned the draft opinion, if finalized as the decision of the court, would reach far beyond the right to an abortion and threaten past rulings on same-sex marriage and access to contraception.

“You’re going to see these decisions up for grabs and further split the United States,” he said during remarks at a fundraiser for the Democratic National Committee on Wednesday night. “We’re going to be arguing about things we shouldn’t have to argue about.”

The leak of the draft was unprecedented from an institution that, unlike most in Washington, closely guards its secrets. Roberts called the disclosure a “betrayal of the confidences of the court” and directed the marshal of the court to launch an investigation into the source of the leak.

Garland also directed the U.S. Marshals Service to provide additional support to ensure justices’ safety as state and local law enforcement have warned of a “highly sensitive and politically charged” threat environment in response to the draft opinion.

The nine members of the court are set to meet Thursday for their first closed-door conference since the leak of the draft.

The Assam woman who fought to win back her...

Bid to ban troublemakers from trains in Scotland

Manchester United 1-0 West Ham United: ‘Those are the...

Cheng Lei: Australian journalist on trial in China for...

United on Ukraine, EU tackles the devil in details...

President Biden heads to Europe to meet with allies

What To Expect From Bank Earnings (Radio)

Match of the Day: How Christian Eriksen has ‘totally...

Fires Flare Up Again at South African Parliament in...

NASA tallies over 5,000 planets beyond our solar system…

UAE Bets on Old Foe Turkey as its New...

Tsitsipas vs Medvedev live stream: how to watch Australian...

Microsoft 365 is swooping in to try and steal...

New offices for the hybrid era? Many companies are...

Learning From India’s Missteps on Delta

US suspends Mexican avocado imports on eve of Super...

DC men who allegedly posed as federal agents under...

Rep. Austin Scott: The Facts Don’t Back Up Biden’s...

Representative Sheila Jackson Lee, who is near Ukraine, talks...

Florida is the least affordable place to live in...

Patrick Jensen: ‘It’s a crazy bond, the trust is...

Review: A generic modern fairy tale in ‘The Royal...

How Ashley And Bar ‘Recommitted’ To Their Teen Mom 2 Marriage