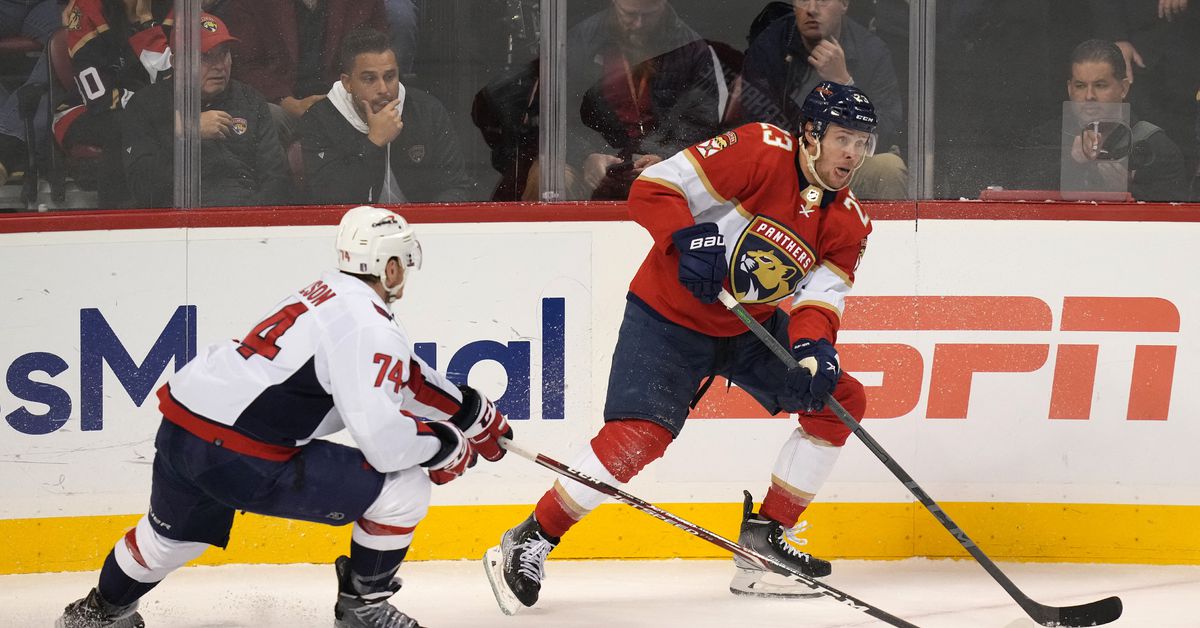 May 12 – Carter Verhaeghe scored twice — including the go-ahead tally in the third period — and added three primary assists as the Florida Panthers rallied from a three-goal deficit to defeat the Washington Capitals, 5-3, on Wednesday night in Game 5 of their first-round playoff series at Sunrise, Fla.

The top-seeded Panthers lead the best-of-seven series 3-2. The eighth-seeded Capitals will host Game 6 on Friday night, hoping to stave off elimination.

Verhaeghe has set a team record with five goals in a playoff series. On his go-ahead goal with 16:56 left in the third, Verhaeghe’s backcheck stripped the puck from Capitals star Alex Ovechkin. Verhaeghe then passed ahead to Aleksander Barkov before finishing the 2-on-1 rush.

Filip Chytil scored the go-ahead goal early in the third period on the power play and New York rallied from a 2-0 second-period deficit to stave off playoff elimination with a victory over visiting Pittsburgh.

It was the first career playoff goal for Chytil, who was the 21st overall pick in the 2017 NHL Draft by the Rangers.

Jacob Trouba and Alexis Lafreniere each had a goal and an assist and Adam Fox and Ryan Lindgren also scored goals for the Rangers, who still trail the best-of-seven first round Eastern Conference series, 3-2. Game 6 is Friday night in Pittsburgh. Vezina finalist Igor Shesterkin stopped 29 of 32 shots.

Mikael Backlund and Trevor Lewis also scored for the Flames, who hold a 3-2 lead in the best-of-seven series. Both Mangiapane and Backlund also collected an assist. Calgary’s Jacob Markstrom made 20 saves to claim another goaltending battle.

Jason Robertson scored for the Stars, while goaltender Jake Oettinger made 29 saves in a strong outing. Malcolm X’s daughter calls for federal inquiry into his...

Retirable secures $6M to plan retirement for those without...

Mark Jackson would be the wrong coach for the...

A Message of Discord Shakes Ukraine: Political Week in Photos

Dr. Jill Biden: “First ladies across the globe are...

Prince Harry says he cried once after Diana death

This is why New Jersey’s reinstated bear hunt won’t...

You Can Fly From Queens to Hartford This Fall

US Open: Emma Raducanu ready for New York despite...

Mali calls on France to withdraw soldiers “without delay”

Microsoft Office will be replaced by Microsoft 365 as...

Why the folding phone revolution has a way to...

Who is Harriet Hageman, the Trump-backed candidate running against...

Could corporates be good matchmakers for startups and VCs?

How to Digitize Old Photos With Your Phone

Even the FBI says you should use an ad...

Thora Birch set to direct and co-star in ‘The...

Xi Jinping opens up on zero COVID reversal: ‘It...

Helicopter crashes in field in Burton in Lonsdale

Barbie gets a makeover with ‘inspiring’ new doll on...

Oil claws back some losses but strong dollar caps...

Rolls-Royce boosted by return to flying and defence demand - Reuters.com