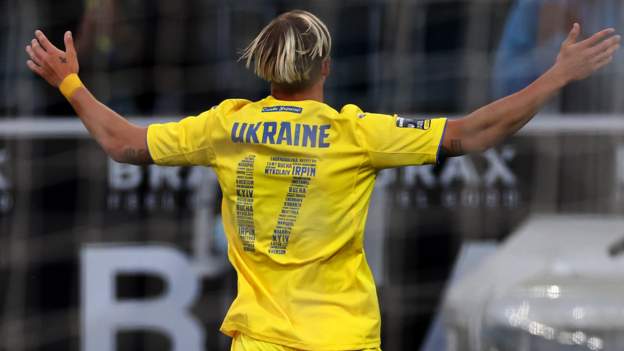 Ukraine played their first fixture since November at Borussia-Park

Ukraine began preparations for their World Cup qualification play-off against Scotland with victory over Borussia Monchengladbach in a friendly.

In their first fixture since the Russian invasion, Ukraine’s national team won 2-1 at Borussia-Park.

All profits from the game, attended by over 20,000 fans, were donated to charities supporting those affected by the conflict, with Ukraine nationals given entry free of charge.

The play-off semi-final had originally been scheduled for 24 March, but was delayed following the invasion. The winner will face Wales in Cardiff for a World Cup finals place on 5 June.

Ukraine had last played in November, winning 2-0 in Bosnia-Herzegovina to secure their place in the play-offs. France in midst of 4th heat wave amid historic...

Brad Keselowski still looking to improve as driver and...

Tucker: Why is everyone so mad at Justice Alito?

5 things to know about the controversial Beijing Olympics

Three group of five coaches that would be great...

Judge dismisses lawsuit over DOJ memo on school board...

With new $20B fund, Insight Partners has a stunning...

It’s time for the Senate to vote: Americans have...

Government resignations: Who is staying, who has gone?

Weavit’s new app wants to be a ‘Shazam for...

Scuba-diving veterans Suunto should be terrified of the Apple...

Michigan pulls away to win emotional game in which...

Opinion | Biden’s Tuition Gambit Could (And Should) End...

Coke’s sustainably chief throws down a marker on regulations...

Nvidia Lovelace RTX 40 series: everything we know so...

6 reasons why you should change your VPN protocol

Google announces a new program that will offer tools...

Why the Fallout series desperately needs Obsidian’s help to...

The Crypto Market May Be Facing Its Biggest Test...

Derivatives Suggest a ‘Sell-the-News’ End to the Ethereum (Ether)...