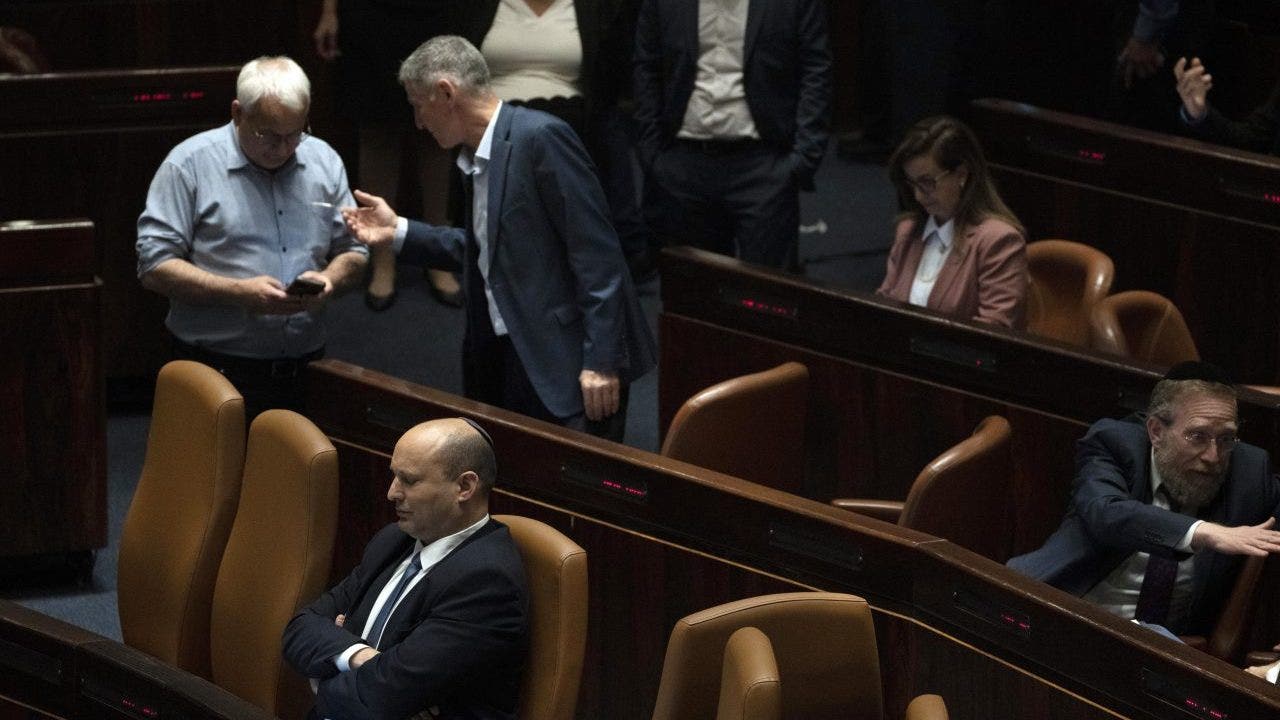 The Russian ambassador to Israel stormed out of a Victory Day event hosted by the Knesset after some of its members condemned the war in Ukraine, Israeli reports said Tuesday.

Israeli Prime Minister Naftali Bennett, lower left pauses during the opening of the summer session of the Knesset, Israel’s parliament, in Jerusalem, Monday, May 9, 2022.

“The war in Ukraine is a crime,” Ukrainian-born Israeli member of the Knesset Yevgeny Soba said during the event, according to the Israeli news outlet Mako. “I cannot help but look with pain at what is happening.

“It hurts me, especially that whoever fought the Nazi oppressor and brought victory, today is fighting each other,” he added. “The war is a slap in the face to our generation of grandparents who fought the Nazis.”

Victory Day, or Victory in Europe Day, commemorates the day World War II ended in Europe, when the Nazis signed the German Instrument of Surrender to the Allied Expeditionary Force and the Soviet Union.

Though the day is celebrated throughout Europe and in Israel, Russian President Vladimir Putin turned the memorialized day into an element of his propaganda machine.

Putin has attempted to justify his deadly invasion by alleging he is “denazifying” Ukraine a claim that has been flatly rejected by Western nations that have pointed to the fact that Ukrainian President Volodymyr Zelenskyy was democratically elected and is Jewish.

Russia held parades in warn-torn cities across Ukraine like Mariupol, which has seen some of the most brutal attacks in the country since the war began nearly 11 weeks ago.

The war has caused the greatest humanitarian crisis in Europe since WWII, displacing millions and killing at least 7,000 Ukrainian civilians.

In the lead-up to Victory Day, Ukrainian officials warned that Russian forces may attempt to use Ukrainian prisoners of war and arbitrarily detained civilians to march in the parades, though it is unclear if this occurred.

Israeli-Russian relatives of World War II veterans hold their photos during a ceremony marking the 77th anniversary of the end of World War II at a memorial site for Jewish fighters, in Haifa, Israel, Monday, May 9, 2022.

Israeli-Russian relations have deteriorated in recent weeks after Russian Foreign Minister Sergey Lavrov suggested Zelenskyys Jewish background was not evidence to support that his administration was not engaging in antisemitic behavior.

“In my opinion, Hitler also had Jewish origins, so it doesnt mean absolutely anything,” Lavrov told an Italian news outlet earlier this month.

“Jews did not murder themselves in the Holocaust,” the Israeli foreign minister said. “The lowest level of racism against Jews is to accuse Jews themselves of antisemitism.”

People walk along a bridge under a billboard showing a yellow Star of David, resembling the one Jews were forced to wear in Nazi Germany, on the annual Holocaust Remembrance Day in Ramat Gan, Israel, April 28, 2022. The European Union’s executive arm proposed a ban on...

Stepping Back to Look at Amazon

A New Zealand parrot stole a GoPro and filmed...

China’s No. 2 Video Game Company Is Coming for...

What Facebook and Instagram’s restricting abortion pills posts so...

Fresh off ‘break up’ with Dems, Yang backs one...

The world’s most spectacular airport is about to double...

Steam Deck designers promise they included as much battery...

Google wants to kill off Dolby Atmos and Vision...

Raise a glass to World Paloma Day with this...

Second Amendment was meant to put down slave rebellions,...

Biden to visit factory making the Javelins Ukraine is...

‘Billboard Music Awards’ 2022 Lineup: All the Performers and...

Nvidia to forge ahead with plans for Arm-based CPUs

Virginia couple missing at sea for 11 days is...

Apple is about to make your iPad more useful...

Apple’s quest to kill off the password is heading...

Amid chaos, some at July 4 parade ran toward...

GOP candidate rips Oregon's 'Menstrual Dignity Act' as an 'implosion of the...