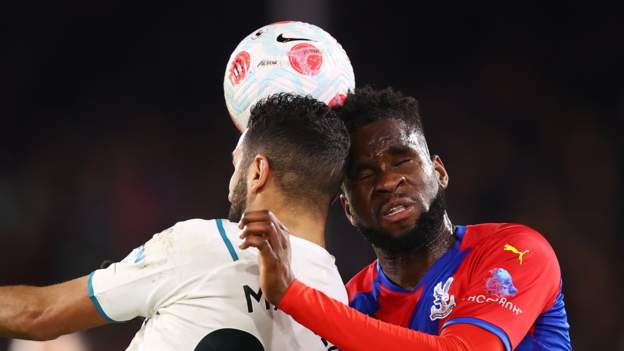 Liverpool and Manchester City began using the mouthguards in March 2021

A study using special mouthguards to assess the impact of heading the ball in training has been extended to 12 clubs across English football.

A 2019 study found ex-professional footballers are more likely to die of dementia than the general population.

Clubs from the Premier League, EFL and WSL will use the mouthguards.

An extension of existing research into the long-term dangers of heading, the mouthguards collect data on the force and frequency of head impacts in training.

The results will be used to develop ongoing guidance on heading in English football.

The Premier League has also created neck strengthening guidance after it identified neck and shoulder strength as an area in need of further research.

In August, new research showed defenders are more likely to have dementia in later life compared with other playing positions in football.

Earlier this year, a dedicated care department for former players living with neurodegenerative disease (NDD) was set up by the Professional Footballers’ Association and on Monday the union launched a new consultation asking ex-players concerned about NDDs to come forward. Almost 2,000 flights canceled on Sunday in the US

Ex-king to visit Spain ‘periodically,’ but will live abroad

Analysis: Loss is victory for far-right in France’s election

Black doctors say they face discrimination based on race

Higher food prices and slumping trade. How the war...

Gucci jumps on the crypto bandwagon with U.S. project...

Jeez That’s Big: New Christ Statue is One of...

Democrats lean on that other rules change

Ukraine: Truss to call on international community to step...

Sound On: Putin’s Next Move, Pain at the Pump...

Eastern Ukraine prepares for Russian forces while other parts...

North Korea may have tested its biggest long-range missile...

Day Traders in Japan Bet the World is Wrong...

Your Evening Briefing: Powell Leaves Room for Lots of...

A Most Magical Finish: Three-Time Paralympian Wins Division of...

EU to remove Sberbank, two other Russian banks from...

On the Frontlines of Ukraine’s Digital Battle Against Russia

Confirmed – Adverts are coming to Netflix and much...

Protests grow in Puerto Rico amid demands for higher...