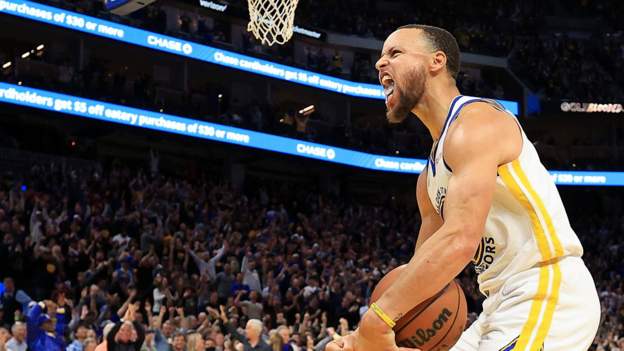 Stephen Curry’s late scores helped the Golden State Warriors to a 101-98 win against the Memphis Grizzlies to extend their Western Conference semi-final play-off lead to 3-1.

Curry had a game-high 32 points and snatched victory with key free throws in the final minute to leave the Warriors one win away from the finals.

Despite playing without the injured Ja Morant, the Grizzlies established a 12-point lead early on in San Francisco and never fell behind until Curry’s heroics in the last minute.

The Warriors travel to Memphis on Wednesday as they aim to reach a sixth finals in eight seasons.

Celtics overcame an 11-point deficit in the third quarter to tie their Eastern Conference semi-final series at 2-2 and will host Milwaukee on Wednesday.

Jayson Tatum also had 30 points for the Celtics as well as 13 rebounds, while Giannis Antetokounmpo’s 34 points and 18 rebounds were not enough to secure victory for the Bucks. Majority wants Biden to consider ‘all possible nominees’ for...

Carolyn Hax: One friend attempted truth-telling. The other ‘blew...

Atlanta shootings have left 4 children dead in a...

Google wants to bring Chrome OS to your PC...

12 Marketing KPIs you should be tracking

Solar to start new year with some long shadows

What Luttig will tell the Jan. 6 committee

On Ukraine, Russia repeats insistence that it had no...

In a first, commercial crew docks with space station

What to know about late ‘Toddlers and Tiaras’ star...

Apple’s AR/VR headset tipped to use iris scanning for...

Brian Kilmeade: Democrats are letting the most aggressive criminals...

Teacher pay talks held ahead of school strikes in...

Putin mocks West, says Russia will press on in...

Dead by Daylight’s ‘Hooked on You’ dating sim spin-off...

Parkland school shooter to get life sentence for killing...

Margot Robbie on “Babylon” and being a “thrill seeker”

MWC to bar some Russian companies from next week’s...

EXCLUSIVE U.S. asked Brazil’s Petrobras if it could raise...

Lucid Is Recalling About 200 High-End EV Sedans Due...

Tom Brady looks comfortable enough in his return as...

Daily Crunch: Since December 2021, Better.com has laid off...

US discourages Dennis Rodman from traveling to Russia to...

Google’s third bet from its Africa Investment Fund is...

AT&T agrees another 5G delay at US airports

Not So Dark helps restaurants run a second delivery-focused...

Inside “The Bogle Effect” (Podcast)

Finland is on the verge of asking to join NATO. Here's why...
Fertility startup Hannah Life Technologies gets $5.15M Pre-Series A – TechCrunch