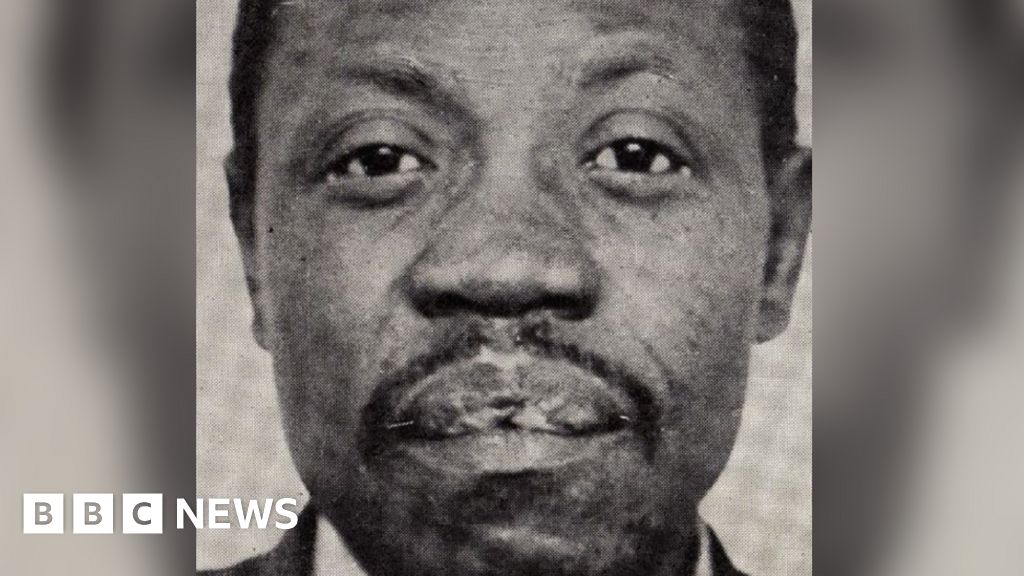 Image caption, The blue plaque to commemorate David Oluwale was unveiled on Leeds Bridge on 25 April

Two men have been arrested over the theft of a plaque honouring a British-Nigerian man who drowned after being chased by police.

The tribute to David Oluwale disappeared just hours after it was placed on Leeds Bridge on 25 April.

West Yorkshire Police said a suspect in his 30s was arrested in Leeds and remained in custody.

A second man arrested on 28 April has been released under investigation, the force said.

Police are also searching for a third suspect, identified at the time of the earlier arrest, a spokesperson added.

The plaque commemorating Mr Oluwale was placed near the spot where he entered the River Aire in 1969 and was unveiled in a ceremony which ended at about 19:00 BST on 25 April.

Police, who have said they are treating the theft as a hate crime, believe it occurred between 21:30 and 22:00 on the same night.

A laminated copy of the plaque was placed on the bridge as a replacement, but was vandalised overnight on 27 April.

The Leeds Civic Trust, which organised the memorial, said it wished to thank police “for their swift action and for their continued thorough investigation into this hateful crime”.

Development and engagement manager Meleri Roberts said the trust and the David Oluwale Memorial Association were grateful for the “incredible and overwhelming” support shown by residents since the theft.

“Many organisations, businesses, groups and individuals have displayed images of David’s plaque, either virtually, digitally or printed, in a collective show of defiance,” she said.

“This united condemnation reflects this city’s true character as one that does not tolerate hatred.”

Image caption, Mr Oluwale’s death led to the first prosecution of British police for involvement in the death of a black person

David Oluwale had migrated from Nigeria in August 1949, hiding on a cargo ship destined for Hull.

He spent his final two years homeless in Leeds city centre and was routinely mentally and physically abused by two police officers.

In the early hours of 18 April 1969, he was chased on to a bridge over the River Aire, and his body was found in the water two weeks later.

Two officers were later jailed for a series of assaults, but justice and civil rights campaigners said their trial presented a deliberately negative portrait of Mr Oluwale as a “social nuisance”. How CNN geolocates and verifies social media footage from...

Rapidly growing black hole may be a “missing link”...

Nvidia GeForce Now might come to Nintendo Switch, if...

Here’s why tape could be your best shot at...

Review: Alice Glass takes back her voice in solo...

Funding fight puts future of US pandemic response in...

‘How to Murder Your Husband’ writer found guilty of...

Havas CEO to Meet Union After Harassment Claims at...

Rising number of families struggle to meet expenses after...

Hackers Can Cut the Lights With Rogue Code, Researchers...

The women put on sale on Clubhouse for their...

US still skeptical of peace talks as Russia claims...

Peckham rape: Vigil to be held in support of...

Hiring slows in US after strong year of job...

On The Money: Jobless claims tick up as omicron...

Liverpool: Why Championship success is just the start for...

Conservatism, If You Can Keep It