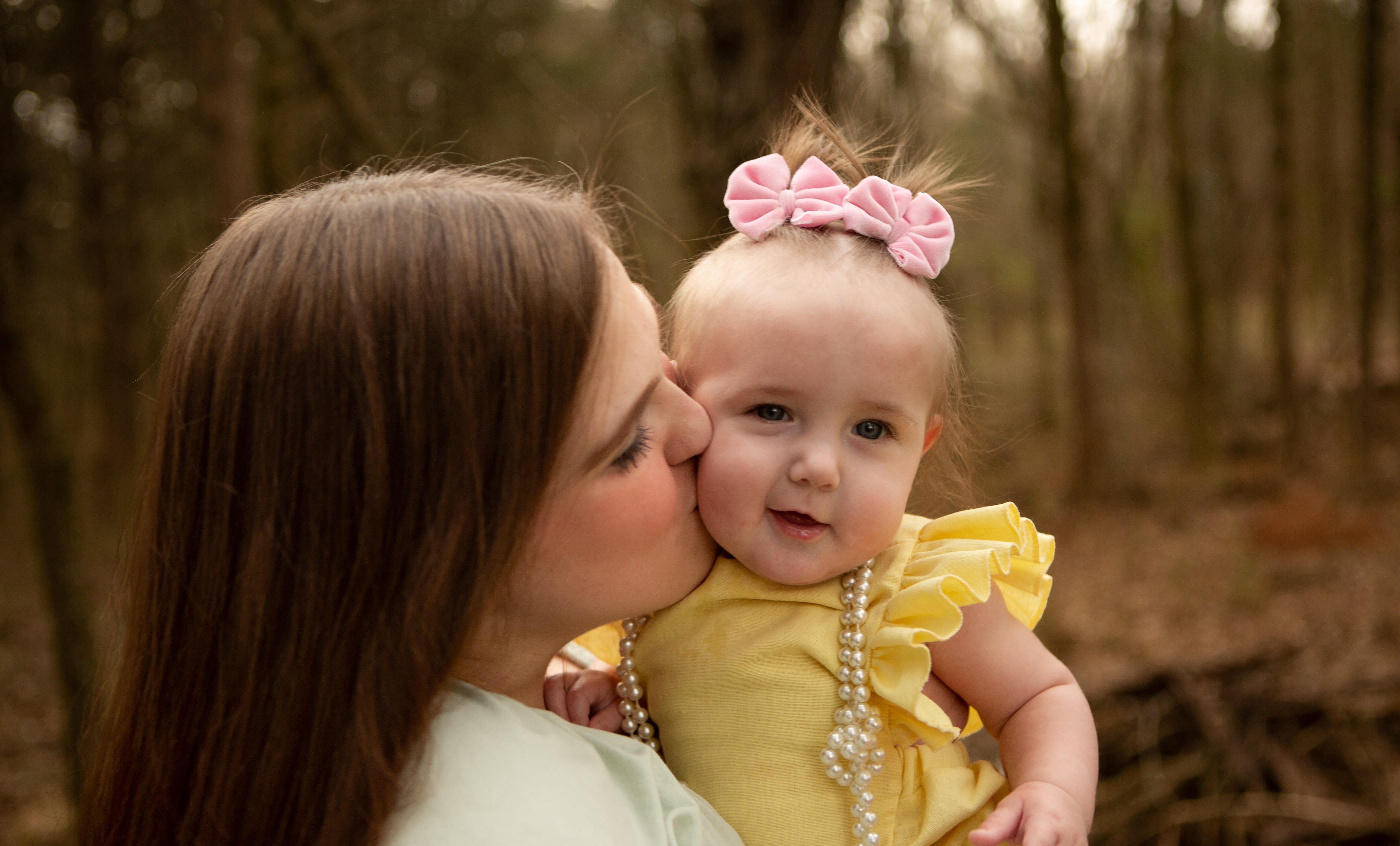 Wynter Balthrop is the mother of Blakely, an eight-month-old baby girl in Gallatin, Tennessee, which is about 30 miles north Nashville.

Balthrop is worried about the baby formula shortage across the country right now, she told Fox News Digital.

Little Blakely is on Enfamils Nutramigen formula which is a hypoallergenic variety. Nutramigen was and is the only formula that her baby is able to tolerate, Wynter Balthrop told Fox News Digital this weekend.

“We went to six different stores and searched and called multiple others as far as three hours away from us.”

A generic brand has made her baby sick.

Balthrop said that just recently, she and her husband “went to six different stores and searched and called multiple others as far as three hours away from us and we were not able to find one can or bottle of her formula.”

Baby Blakely of Tennessee, with mom Wynter Balthrop. “It just wasn’t fair to her,” said Balthrop, referring to a type of baby formula she was forced to give her daughter when the family couldn’t find the child’s hypoallergenic variety.

“[I was] panicking and sad for my girl because we had enough formula left to make one bottle and I knew we would have to use the generic formula that hurt her stomach again. And that broke my heart.”

“I mean, it just wasnt fair to her,” said Balthrop. “But we had no other options.”

“I knew we would have to use the generic formula that hurt her stomach again. And that broke my heart.”

Grocery-store shelves that once held an abundance of baby formula are now empty, or very nearly so, at many locations across America.

In six different states Iowa, Missouri, North Dakota, South Dakota, Texas and Tennessee over half the baby formula was sold out during the week starting Sunday, April 24, said Datasembly, a Tysons, Virginia-based provider of real-time product pricing and assortment data for retailers.

“Inflation, supply chain shortages and product recalls have brought an unprecedented amount of volatility for baby formula,” said founder and CEO Ben Reich in a statement.

“We expect to continue to see the baby formula category being dramatically affected by these conditions. Baby formula stock has been one of the more affected categories so far in 2022, and one that will continue to demonstrate higher than average out-of-stock levels,” he also said.

Mom Wynter Balthrop (at right), with her husband and baby daughter. “We had no other options” for formula, she told Fox News Digital.

“Thankfully,” said Balthrop, “we were able to find three bottles of ready-to-feed formula in stock at a store a few towns over the next morning so I rushed to get it.”

The current baby formula shortage in the U.S. started with COVID-19 supply chain issues. But things escalated several months ago once Abbott Laboratories issued a recall of its Similac product, after reports that a bacterial infection caused two infant deaths, according to previous reporting by FOX Business.

Abbott voluntarily recalled one lot of Similac PM 60/40 manufactured in Sturgis, Michigan, on Feb. 28. This is in addition to other voluntary recalls of lots of Similac, Alimentum and EleCare powder formulas on Feb. 17, according to a company press release.

Baby formula is offered for sale at a big box store on Jan. 13, 2022 in Chicago, Illinois. Baby formula has been in short supply in many stores around the country for several months now.

Wynter Balthrop of Tennessee has begun stockpiling formula to get them through her baby’s first birthday she doesn’t see any other way.

“We are now grabbing every can or ready-to-feed bottle we see,” said Balthrop, “while also trying not to be greedy and leave some for others.”

“I’ve seen the fear in their eyes [over] the empty shelves at stores.”

Balthrop said it breaks her heart for those “mamas who arent so lucky and for those moms on supplemental programs such as WIC,” referring to the government’s Special Supplemental Nutrition Program for Women, Infants and Children.

She added that those moms are limited in where they can shop because they struggle to afford their childs formula. She has friends on WIC, she said.

“Ive seen the fear in their eyes [over] the empty shelves at stores, praying that they find [formula] at the next store they go to,” she added.

Baby Blakely of Gallatin, Tenn. “My heart breaks for all the mamas out there suffering and panicked from this [baby formula] shortage,” said mom Wynter Balthrop to Fox News Digital.

She added, “Its sad that in today’s world, this is an issue we are having. My heart breaks for all the mamas out there suffering and panicked from this shortage.”

With many parents desperate to feed their babies, social media posts have been circulating about how to prepare homemade formulas or requests for such recipes.

PEDIATRICIAN’S PLEA TO PARENTS: DO NOT MAKE YOUR OWN BABY FORMULA

But pediatricians and other infant-care specialists warn parents and caregivers against this.

They first recommend that moms breastfeed for as long as possible but beyond that, they share important information and advice.

Pediatricians have their say

Among the tips that Sarah Adams, M.D., FAAP, a pediatrician at Akron Children’s Hospital in Akron, Ohio, shared with Fox News Digital on the topic of baby formula are the following:

Avoid hoarding. The American Academy of Pediatrics (AAP) advises buying no more than a 10-day to 2-week supply of formula.

Two cans of baby formula are shown here in a home. The American Academy of Pediatrics (AAP) says parents should not hoard supplies.

Call the doctor. “Call your pediatricians office and ask if they can get you a can [of formula] from the local formula representatives,” she said.

Buy formula online. Do make sure, however, urged Dr. Adams, “to purchase from well-recognized distributors and pharmacies and NOT from individually sold [operations], auction sites or overseas!”

Homemade formulas can have contaminates

“The answer to parents giving homemade formula to their babies is NO! It is very dangerous,” Dr. Meg Meeker, a longtime pediatrician, author and creator of the “Parenting Great Kids” podcast, also told Fox News Digital on this issue.

Amid today’s baby formula shortage, some families have described their “panic” and desperation in finding what they need for their infants.

“We know a lot about this because many years ago parents used to make it but babies got very sick.”

She added, “Homemade formulas can have contaminates because they haven’t been properly handled. But more important problems relate to poor nutrition,” she said.

The FDA weighed in on the issue as well.

To the question, “Are homemade formulas an alternative” for parents, the FDA answers clearly on its website today: “No. The FDA advises parents and caregivers not to make or feed homemade formula to infants. Homemade infant formula recipes have not been evaluated by the FDA and may lack nutrients vital to an infants growth.”

“I hope and pray daily this shortage gets resolved soon and quickly for the sake of all of the formula-fed babes out there!”

Also, last year in a press release, the agency said, “The FDA has recently received adverse event reports of hospitalized infants suffering from hypocalcemia (low calcium) that had been fed homemade infant formula.”

It said there are potential problems with homemade formulas, including contamination and/or “inadequate amounts of critical nutrients” for babies.

Said Balthrop of Tennessee, “I hope and pray daily this shortage gets resolved soon and quickly for the sake of all the formula-fed babes out there!”

As of just yesterday Mother’s Day Balthrop shared this update with Fox News Digital: “I am still having issues finding formula. Ive been checking the stores almost daily and havent found one [can] of [the baby’s] formula this past week, which is wild!”

She also said that a Facebook group in her area has been started so that moms can exchange the latest information about formula availability, store details and more.

Unpaid work for men who hunted hares with dogs

Félicien Kabuga: Rwanda genocide suspect due to go on...

2nd fatal shooting in 2 days with deputies in...

Banker in bribe scandal pleads not guilty in Puerto...

Vector graphics explained: how to make logos, advertisements, and...

Rory McIlroy in share of lead before Canadian Open...

Calls for contact tracing system to be wound up

Cabinet Office staff accused of bullying and racism in...

You—Yes, You!—Would Be a Better Owner for Twitter Than...

Fitbit might be building the stress-busting smartwatch of my...

Prime Day is too good at making me want...

The CIA Has Secretly Run a “Bulk Collection” Program

Hedging the Russian Ruble Hasn’t Been so Expensive Since...

Placebo effect the true cause of many reported COVID-19...