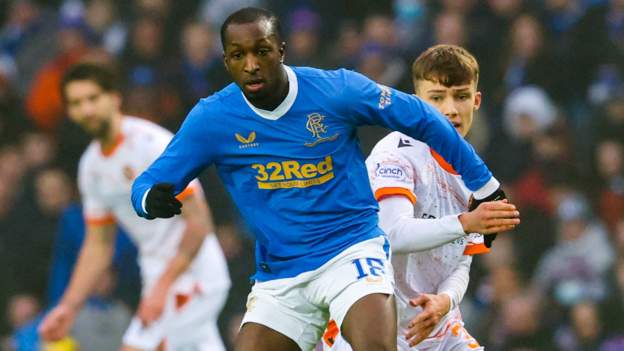 Rangers must beat Dundee United at Ibrox to avoid handing the title to Celtic.

Last season’s champions trail by nine points with three matches remaining, while a huge gulf in goal difference makes the task near impossible.

Dundee United have taken four points from Rangers at Tannadice and lost 1-0 on their last visit to Govan.

United sit fourth as they compete with Motherwell and Ross County for two qualifying spots in Europe.

While the visitors are eyeing a run in the Europa Conference League next season, Rangers are preparing for a Europa League final with Eintracht Frankfurt later this month, with that game in Seville coming three days before a Scottish Cup final date with Hearts.

Manager Giovanni van Bronckhorst must therefore consider what is best for a squad already missing some key players.

Rangers midfielder Joe Aribo will be assessed after having to come off just before half-time in Thursday’s Europa League semi-final win over RB Leipzig with a head knock.

Striker Kemar Roofe did not make the squad as he tries to recover from a knee injury, while Filip Helander, Alfredo Morelos and Ianis Hagi are out for the season.

Dundee United striker Marc McNulty has been ruled out for the remainder of the campaign.

Kevin McDonald has recovered from injury and is back in the squad, but fellow midfielder Calum Butcher is unlikely to play for the rest of the campaign because of a personal issue while Max Biamou, Ian Harkes and Peter Pawlett have also played their last games of the season.

Rangers winger Scott Wright: “The confidence in the team is high. You could see from the performance on Thursday night and there was character shown as well. It was a special night for everyone involved at the club.”

Dundee United defender Lewis Neilson: “That would be a great feeling to go to European football, that’s every boy’s dream growing up. We will always back ourselves no matter who we are playing, so the points are up for grabs.”

Did you know? Rangers scored fewer goals – two in three games – in this season’s Premiership against Dundee United than any other side.

Choose your starting XI. It’s up to you how to approach it – you could go for the team you WANT the manager to pick or the one you THINK he will.

Choose your starting XI. It’s up to you how to approach it – you could go for the team you WANT the manager to pick or the one you THINK he will.

Rate players out of 10 throughout or after the game. The rater will close 30 minutes after the final whistle.

Rating range key1 = Give it up10 = Pure perfection Behind Biden’s decision to not name names over the...

Australia says Kanye West must be fully vaccinated to...

Google has a new idea for tracking us across...

Stay away in event of accident with Olympics vehicle,...

iPhone SE 3 will apparently miss out on the...

Right About the Environment

Celine Dion cancels tour dates due to ‘severe and...

The Batman director reveals how its scariest scenes honor...

Seinfeld’s Kramer Is Trending for the Most ‘Kramer-Like’ Reason...

Harris to travel to Selma for ‘Bloody Sunday’ anniversary

Moth that causes rash is spreading due to warming...

Qantas promises direct flights from Sydney to London and...

We Just Got the Biggest Monthly Drop in Used...

Woman killed, officers hurt in standoff with gunman in...

Police investigation into Downing Street parties gets closer to...

FedEx Suspends All Service to Russia and Belarus as...

It’s Almost Impossible to Find Out Which Covid Variant...

Why a growing number of Asian Americans are staking their claim to...