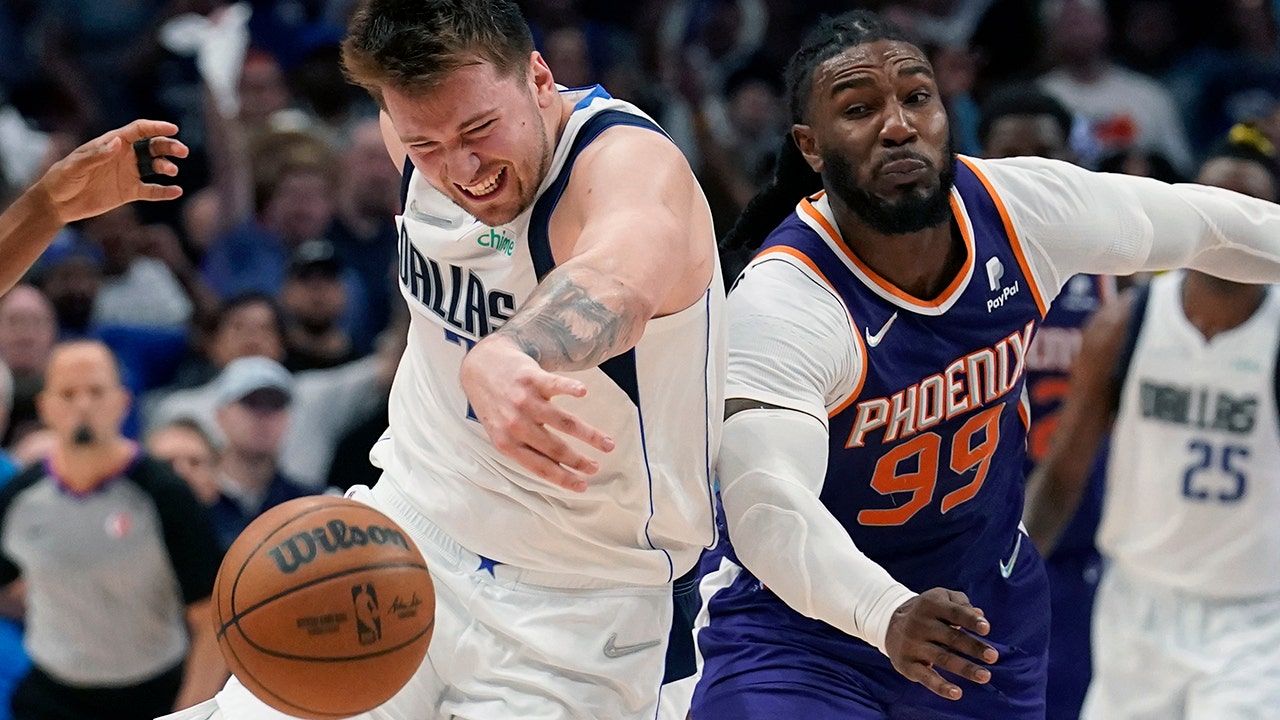 Luka Doncic got the help he and the Dallas Mavericks needed from Jalen Brunson on offense and himself, Reggie Bullock and others on defense.

The Dallas superstar had 26 points and 13 rebounds, and the Mavericks turned up the defensive pressure to get back in their Western Conference semifinal series with Phoenix, beating the Suns 103-94 on Friday night.

The Mavericks spoiled Chris Paul’s 37th birthday, forcing the 17-year pro into his most turnovers in any half of a playoff game with seven before the break.

Dallas cut the Suns’ series lead to 2-1 and ended an 11-game losing streak against Phoenix, regular season included. Game 4 is Sunday in Dallas.

“Energy, man,” Doncic said of the best Dallas defensive showing of the series. “The crowd gets you going. The energy and the execution were better. That’s what we’ve got to do every game.”

Dallas Mavericks guard Luka Doncic, left, and Phoenix Suns forward Jae Crowder (99) battle for a loose ball during the second half of Game 3 of an NBA basketball second-round playoff series, Friday, May 6, 2022, in Dallas.

Paul didn’t have any more turnovers after halftime, but the Suns finally struggled with their shooting when they weren’t turning it over. Phoenix shot 45%, ending a run of at least 50% shooting in the playoffs at eight games.

“It felt like all seven of ’em were back to back to back,” said Paul, whose career high for a game in the playoffs is eight turnovers. “If I dont turn the ball over like that I feel like its a different game.”

Jae Crowder scored 19 for Phoenix, but the Mavericks limited the impact of Devin Booker in much the same way they did Paul. Booker scored 18 but was just 2 of 7 inside the 3-point line, and Paul had 12 on just nine shots (five made) in the Suns’ lowest-scoring game of the season.

Doncic just missed a triple-double with nine assists, while Brunson led Dallas with 28 points after struggling in the two losses in Phoenix when Doncic averaged 40 points but didn’t get enough help.

“I found a way to bounce back tonight,” Brunson said. “I just cant be satisfied with this. Sundays going to be another brutal game. I have to bring the same energy, the same intensity, the same everything.”

A scrambling Dallas defense was the biggest difference, starting from the opening tip with Bullock shadowing Paul everywhere. The Mavericks stepped into passing lanes, including when Spencer Dinwiddie tiptoed along the sideline after a steal for a layup in transition.

Paul had six turnovers in the first 16 minutes, including one when he simply lost the ball out bounds trying to work his way to the basket. The only Dallas turnover before halftime was an offensive foul on Doncic, who disliked the call enough to mimic what he thought were flopping movements by Paul.

The Suns targeted Doncic’s defense when shooting 84% to pull away in the fourth quarter of a 20-point win in Game 2. The 23-year-old Slovenian dove to the court early in this one, winning a battle with Deandre Ayton for a loose ball.

“When you see your best player doing that, it kind of sets a mood,” Dorian Finney-Smith said.

Doncic had to leave with his fifth foul early in the fourth quarter, and the Suns cut an 18-point deficit earlier in the second half to nine just after he came back.

Brunson answered with free throws to get the lead back to double digits, and the Mavericks got enough stops to stay comfortably in front.

The lead was eight when Doncic kept Crowder from getting a steal near midcourt with a minute remaining, leading to a corner 3 with from Bullock, who scored 15. He and Finney-Smith, who scored 14, had four 3s apiece.

“It wasnt like us,” Booker said. “You can credit them. They came out played hard, played desperate. Thats that. Weve got a series.”

Suns: Mikal Bridges was called for a technical foul late in the first half, and Paul got one early in the second. Both came going into timeouts. … Ayton had 16 points and 11 rebounds. … Torrey Craig was out with a right elbow contusion. He played sparingly in the first two games of the series.

Mavericks: Bullock, who spent plenty of time guarding Paul in the first half, was reported as questionable with a rib injury at halftime. … Orlando coach Jamahl Mosley, a former Dallas assistant, attended the game. Two of his players, Cole Anthony and Wendell Carter Jr., were with him.

The Mavericks got a favorable possession call early in the second half when the ball appeared to go off them out of bounds. Officials ruled Dallas ball, and as the Suns tried to plead with officials to reconsider, Brunson inbounded quickly to Finney-Smith, who hit a 3 without a dribble. The best fire pits for your outdoor space

Windows 10 is winning in another surprising way

Godzilla is getting an Apple TV show set in...

Basketball legend Sue Bird says 2022 will be her...

These 12 Democrats Voted To Confirm Judge Who Granted...

Major Garrett and David Becker on “The Big Truth”

Biden’s energy policies do nothing to increase supply as...

Kia recalls sedans because plates in ceiling can come...

How cars became a fashion statement in the ’50s...

Platinum Jubilee: Love and respect for the Queen alongside...

Dying of cold on the streets of São Paulo

‘I Can Understand’: Blind Iraq Vet Dog With PTSD...

United cuts flights at Newark in effort to reduce...

Nadler, Maloney could face off in primary with redrawn...