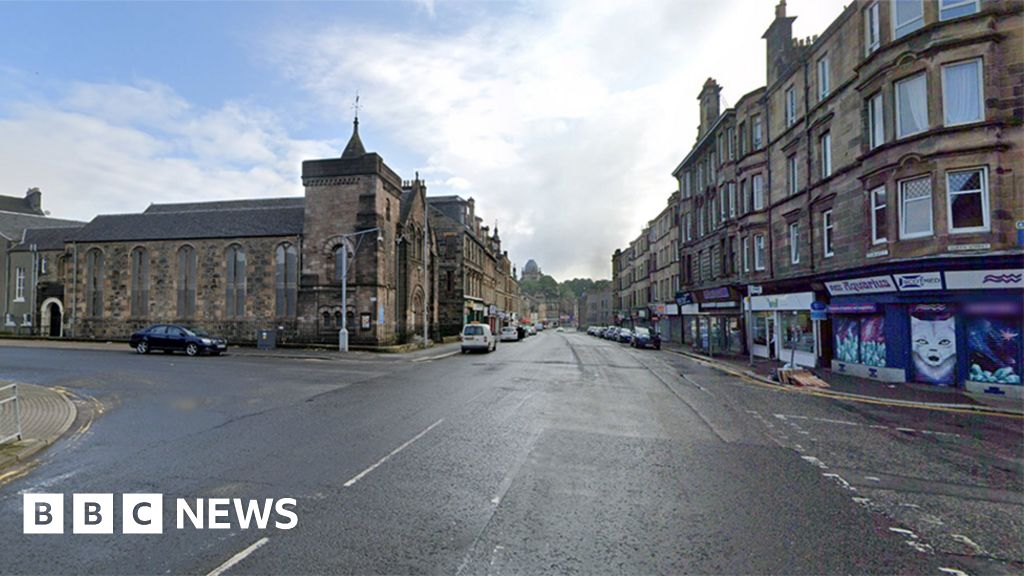 A 50-year-old man is in hospital with “life-threatening injuries” after a targeted attack in Renfrewshire.

Police said officers were called to reports of a man being stabbed on Broomlands Street, Paisley, at about 09:15 on Thursday.

A 26-year-old man has been arrested in connection with the assault.

Police Scotland said the incident was not related to the nearby polling station at Martyrs Church Hall or to the election.

Officers are appealing for witnesses to the assault or anyone with dash cam or CCTV footage to contact them.

Det Insp Ian Ross said: “This has been a targeted attack, with the two individuals known to each other, and one is now in a very serious condition in hospital.” VAR: Scottish Premiership aims to have technology in place after World Cup finals

Study: Only half of American households donate to charity

For the first time in nearly two decades, only half of U.S. households donated to a charity
Read more

Get unlimited data and £100 cashback with these cheap...

Samsung Galaxy S21 deals can rack up the costs quickly but these contracts keep the costs low and offer unlimited data.
Read more

Groups call for reintroduction of jaguars in US Southwest

The pop star quickly followed the statement with another social media post: a video of herself dancing in two separate orange dresses inside of her home.
Read more

St Helens come from behind to beat Castleford at Wembley and win the Challenge Cup for the first time in 13 years.
Read more

Two top aides for Vice President Kamala Harris announced their plans to leave in the coming weeks as she readies for her first visit to the U.S.-Mexico border since being tapped to study the crisis, according to a report.
Read more

Welcome to the Hyperdrive daily briefing, decoding the revolution  reshaping the auto world, from EVs to self-driving cars and beyond.
Read more

Apple, Intel will be first to adopt TSMC’s 3nm...

Apple and Intel are first in line to benefit from the latest manufacturing technology from TSMC.
Read more

“I heard the foundations for a vigorous contest,” pollster David Herle said of his first meeting with a focus group of voters from B.C. and the 905.
Read more

A deadly rampage at three Georgia massage businesses, where the employees were mostly of Asian descent, has prompted Asian American women to openly share stories of being sexually harassed or demeaned based on their race
Read more

Liverpool set to sell Marko Grujic to Porto and...

Microsoft's versatile Surface Pro 7 is on sale for a record-low price of $599 in an early Black Friday deal at Best Buy.
Read more

Americans' concerns over crime have hit a four-year high, according to a Washington Post- ABC News poll ...
Read more

KKR & Co. is leading a $500 million investment in Box Inc. in a deal that will see one of its representatives join the board of the cloud software company.
Read more

FA Cup: How player-manager Matt Morton came out to...

As his team gets ready to play in the FA Cup extra preliminary round, Thetford Town player-manager Matt Morton speaks about how he came out to his team-mates.
Read more

Montana lab starts to fires to find ways to...

Inside a lab tucked away in Montana, researchers are deliberately setting a wildfire. Carter Evans reports on a surprising new tactic to fight wildfires like the Blue Cut in California that destroyed more than 100 houses.
Read more

MWC 2021 is going ahead, but it is a hybrid event - here's what we're expecting to see there.
Read more

Dramatic decline in stock could mean end of bull...

One of the longest bull markets in U.S. history could be over as the Dow Jones Industrial Average has fallen more than 10 percent from its peak in May. Bad economic news from China has fueled sell-offs around the world. CBS News business analyst Jill Schlesin…
Read more

Children are having their noses swabbed or saliva sampled at school to test for the coronavirus in cities such as Baltimore, New York and Chicago. In other parts of the U.S., school districts are reluctant to check even students showing signs of illness for C…
Read more

A US Navy nuclear engineer and his wife allegedly sold the secret data to an undercover FBI agent.
Read more

Taiwan is the focus of rival displays of might by the world’s major military powers this week, with record sorties by Chinese military planes off one coast and flotillas of U.S. and allied warships off another.
Read more

It Was All Already Deeply Fake

The digital information environment has long been one where you cannot believe your eyes. The post It Was All Already Deeply Fake appeared first on The American Conservative.
Read more

What we learned this week in the trial of...

It was an eventful week in the closely-watched trial of Elizabeth Holmes, with witnesses who included scientists, medical professionals, a patient and even the former US Secretary of Defense laying out how the promise of Holmes' blood testing company Theranos…
Read more

Needing to sell the Covid bill, the White House...

The first lady took a first stab at selling the $1.9 trillion piece of legislation. Her setting: a school hit hard by the pandemic.
Read more

Florida fugitive Brian Laundrie, the fiancé of slain van life blogger Gabby Petito, has arguably become the most wanted man in America after slipping off into hiding following reports of her disappearance on Sept. 11.
Read more

How a Roy Moore victory could affect the GOP...

CBS News political contributor and Republican strategist Leslie Sanchez joins "CBS This Morning: Saturday" to discuss how Alabama Senate candidate Roy Moore's successful election would be a short-term win but a long-term loss for the GOP, why some Republicans…
Read more

Democrats Look for Tax Options If They Have to...

After months of focusing on proposals to increase tax rates on income and capital gains, Democrats are exploring other alternatives to fund President Joe Biden’s social spending expansion, according to people familiar with the discussions.
Read more

Most CIOs expect IT budgets to rise next year

Dozens of people are reported missing and others have been left stranded in the west of the country.
Read more

Sign up for our Middle East newsletter and follow us @middleeast for news on the region. U.S. President Joe Biden and the leaders of Germany,...
Read more

Aberdeen's goalscoring woes were evident once again as they edged past League One strugglers Dumbarton to reach the Scottish Cup fourth round.
Read more

It had been unclear whether the alliance would continue with the mission.
Read more

Death Stranding: Director’s Cut includes ultrawide support on PS5, but it’s not what you might think.
Read more

A transcript of the long-awaited testimony by former White House counsel Don McGahn was released by the House Judiciary Committee Wednesday.
Read more

President Obama says a better understanding of the science behind traumatic brain injuries will help protect both America's kids and the U.S. military
Read more

One company is trying to persuade small-scale renewable generators to mine crypto currency.
Read more

Country singer Morgan Wallen will be eligible for multiple awards at this year's CMA Awards, but not the show's top prize
Read more

How to Identify Whether a Dog is Dangerous or...

Dog behavior expert, Gia Savocchi, compared a dangerous dog with an adoptable one, showing the signs to look out for.
Read more

Follow Newsweek's Black Friday 2021 live blog, as we reveal the best and biggest offers throughout the day, as they happen.
Read more

From Phoebe Bridgers To Megan Thee Stallion, Get To...

Battle for $1 Billion of Venezuelan Gold Gets to...

The question of who controls more than $1 billion of Venezuelan gold stored in the Bank of England’s vaults, took another twist after the British government said that it continues to recognize the leadership of opposition figure Juan Guaido.
Read more

Blinken does not foresee ‘grand bargain’ on North Korea

Secretary of State Antony Blinken said on Sunday that there was no "grand bargain" prepared when approaching nuclear talks with North Korea, saying instead that denuclearization of the Korean peninsula would likely take "...
Read more

Q&A: Alana Haim lives out a Valley dream in...

When Paul Thomas Anderson first mentioned to Alana Haim that he wanted to put her in a movie, she assumed it would be as an extra walking through the frame, or something
Read more

Apple Inc. has hired a new engineer to lead software efforts for its HomePod smart speaker, aiming to turn the product into a bigger hit.
Read more

Stacey Abrams, a leading national voice on ballot access, will deliver the keynote address at an event commemorating the 100-year anniversary of the 1921 Tulsa Race Massacre
Read more

The MPs' report into the handling of Covid was a "damning indictment" of the government says the Labour leader.
Read more

Los Angeles Lakers star LeBron James will not be suspended after he violated the NBA’s health and safety protocols this week when he attended a promotional event with rapper Drake and actor Michael B. Jordan, according to a report.
Read more

Human remains have been found in a New Zealand coal mine, police said on Wednesday, more than a decade after one of the country's worst industrial disasters.
Read more

We've rounded up Adobe's deals and others we've spotted as Black Friday ends for Creative Cloud and other apps.
Read more

The president has set a goal for 70% of American adults to have received at least one dose of the COVID-19 vaccine by July 4.
Read more

Despite encouragement from the President, House Democrats fell short this week again in getting enough votes to pass President Biden’s now $1.75-trillion Build Back Better bill. Progressives are frustrated with what was cut from the original $3.5 trillion soc…
Read more

US strikes Taliban and captured equipment in support of...

The US military carried out two strikes against the Taliban overnight in support of Afghan forces in the Kandahar province, multiple defense officials said, targeting captured equipment.
Read more

The airline is also trialling electric and hydrogen powered planes in a bid to be carbon neutral by 2040.
Read more

US opens more distance in worldwide race against coronavirus

How a patient treated 280 miles from home died...

What was so wrong with the Apple TV 4K...

A look at why Apple’s previous Siri remote was so universally loathed, and why the tech company had to shake things up for the new Apple TV 4K 2021.
Read more

A spike in Covid cases and the death of the Rolling Stones drummer make the front pages.
Read more

Tunisia leader fires ambassador to US in rash of...

The Tunisian president has appointed a new economy minister and is keeping up a rash of dismissals, including the ambassador to the United States on Tuesday
Read more

Sarah Hunter returns from an injury lay-off to captain England in the Women's Six Nations, which starts against Scotland on 3 April.
Read more

The House Majority Whip could be the first Democrat fined for violating the new security rules.
Read more

Peter Bol: The Sudanese-Australian runner who lifted a nation

Peter Bol's Olympics has delighted Australians, becoming a "symbol of what we can aspire to be".
Read more

An arrest warrant has been issued for rock musician Marilyn Manson in New Hampshire over an alleged assault at a concert in 2019.The Gilford Police Dep...
Read more

Jordan says 'votes are there' to oust Cheney from GOP leadership