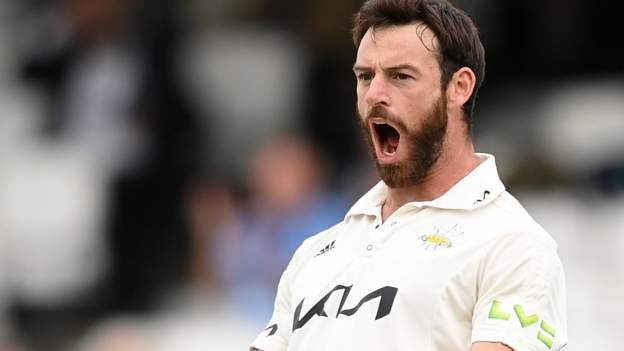 Jordan Clark took his season’s wicket-tally to 19 as Surrey took total control of their County Championship match against Northamptonshire at the Kia Oval.

Atkinson’s career-best 66 not out and Overton’s equally robust 59, with both knocks full of quality strokes, rapidly took the game away from Northants after they had begun the second day promisingly with two quick wickets when Surrey resumed on 261-6

Sam Curran added only two runs to his overnight 71 before he nibbled at Tom Taylor, operating from around the wicket, and was held at first slip by Ricardo Vasconcelos – the Northants captain happily better again after spending most of day one off the field feeling ill.

And then Clark edged a Ben Sanderson leg-cutter to keeper Lewis McManus to go for two, but that was as good as it got as Atkinson and Overton counter-attacked brilliantly in what became a record ninth-wicket partnership for Surrey against Northants.

Overton, on 24, should have been stumped by McManus and Northants’ sense of deflation grew when Overton proceeded to swing Simon Kerrigan for three big sixes over the short boundary as he sprinted to his half-century.

Atkinson, too, soon completed his own excellent maiden first-class fifty, hitting 12 fours overall in a 98-ball effort which underlined his all-round quality.

Overton’s powerful innings ended, unexpectedly, with an edged forward defensive push at Rob Keogh’s off spin and No 11 Dan Worrall, after clubbing his first ball over extra cover for six, was then caught from the next as Surrey’s innings ended on the stroke of lunch.

Worrall, the Australian paceman signed in the winter after four seasons at Gloucestershire, then produced a magnificent eight-over new-ball burst in which he was decidedly unfortunate only to take the scalp of Vasconcelos, who edged behind on 14.

But by then Clark had already sent back both openers, jagging one into Will Young’s pads to have the New Zealand Test batsman leg-before for two and then seeing Emilio Gay clip straight to Curran at square leg on 12.

Vasconcelos’s dismissal left Northants staggering at 28-3 and by tea they were 87-5 after Colin de Grandhomme had Keogh caught behind for 16, and Overton’s pace accounted for Saif Zaib.

Luke Procter was the one top-order player to find a way to survive against the Surrey seamers, although he too would have gone on 29 if De Grandhomme had clung on to a relatively straightforward chance at second slip off Atkinson.

McManus tamely chipped Clark to extra cover on 23 and Procter, after reaching a 120-ball fifty with seven fours, battled gamely to finish the day on a brave unbeaten 61.

De Grandhomme returned to have Taylor taken low down at second slip for two, edging an away-swinger, while Matt Kelly made 17 before he edged Worrall to Ben Foakes from what proved to be the final ball of the day. Latest apps promise fast service but can they deliver?

Samsung says an update is coming to fix phone...

Around 24% of shareholders vote against Glencore’s climate progress...

Boy charged in Michigan school shooting will stay in...

WhatsApp gives us a glimpse at Android-to-iOS chat migration

Actually, Elon Musk Has More Kids Than You Think

‘Shopping Cart Killer’ May Be Linked to 5th Body,...

Only 17 Percent of U.S. Kids Vaccinated Against COVID...

Australians voters go to the polls as election heads...

Kim Kardashian wore one of Marilyn Monroe’s most iconic...

How to watch the confirmation hearings for Judge Ketanji...