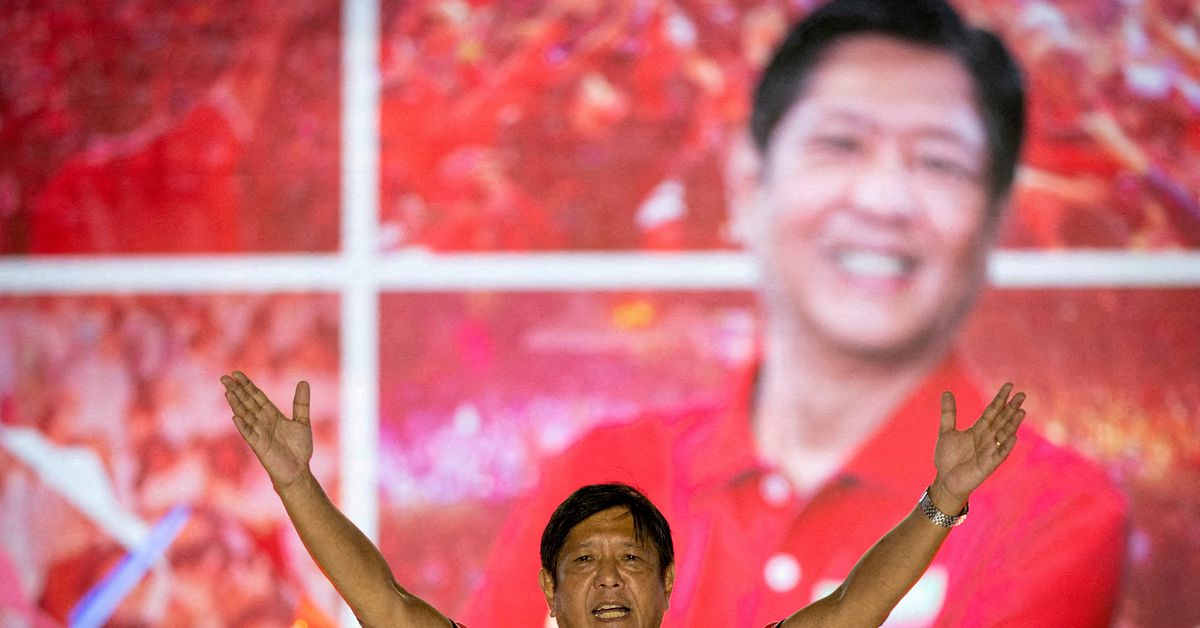 MANILA, May 6 (Reuters) – Philippine voters head to the polls on Monday in a presidential election shaping up as a rematch between the son and namesake of the country’s late dictator and the human rights lawyer who narrowly beat him in the 2016 vice presidential contest.

Opinion polls in the days ahead of the vote showed Ferdinand “Bongbong” Marcos Jr comfortably ahead of his rivals, giving him a real chance at turning the tables on Vice President Leni Robredo, who is running second in the polls.

“It is very seldom that elections are really decided by rational calculations, by the scrutiny of a candidate’s public record,” said retired political professor Temario Rivera. “There’s a lot of emotion involved and that is why the narratives you are most comfortable with normally are decisive.”

The 64-year old Marcos, whose baritone voice is strikingly similar to his father’s, has homed in on a single message all throughout his campaign – unity.

“Bongbong Marcos will be the president of Filipinos regardless of your political colour, race or creed,” a spokesperson said.

A victory for Marcos, who has maintained his lead while largely avoiding debates with key contenders, would complete a once-unthinkable rebranding of his family name, 36 years after a “people power” uprising toppled his father and drove his family into exile. read more

Robredo, 57, who describes the 1986 uprising as her political awakening, is confident of another victory over Marcos. Her campaign, built on a promise of an honest and transparent government, appears to have gained more momentum in recent weeks attracting big crowds to rallies.

Pink-wearing supporters of Robredo, the only female candidate in a field of 10 presidential contenders, have gone house-to-house in a bid to woo more voters.

“In 2022, the last man standing will still be a woman,” she said early in the campaign.

Other candidates running for president include former boxing champion Manny Pacquiao, Manila Mayor Francisco Domagoso and Senator Panfilo Lacson, though they are currently well behind in the polls. read more

Incumbent president Rodrigo Duterte has not endorsed a presidential candidate, but his political party is backing Marcos, and his daughter, Sara Duterte-Carpio, is Marcos’s running mate.

Duterte-Carpio remained the top choice for vice president in recent polls, a position elected separately from the president, and could be key to a Marcos victory if she succeeds in rallying her supporters behind him.

Whoever wins the elections will face the daunting task of rebuilding the economy, which before the pandemic was one of Asia’s fastest. Taming inflation and charting a foreign policy amid a burgeoning China-U.S. superpower rivalry in Southeast Asia will also be key. Poland to give households one-off payment to offset rising...

Cost of living has made my university flat hostile

Trump Declares Himself ‘Honest and Innocent’ as He Rails...

Jefferies Delays Return to Office Until Jan. 31 Amid...

WHO warns of increase in Eastern European COVID-19 cases

Monkeypox antiviral drug put to the test in trial

Judge denies Ghislaine Maxwell’s attempt to have her conviction...

Investors Cool on Funding Tech That Will Help Tackle...

Canonical now hopes to IPO in 2023

Pipe expands into media and entertainment financing with its...

Freewrite Alpha is the cheapest smart typewriter Astrohaus has...

Work at a school or nonprofit? You could erase...

Biden, Harris to speak on anniversary of Capitol insurrection

YouTube kicks off its podcast push with an Explore...

Gabby Giffords and her ongoing fight

Almost all of Portugal in severe drought after hot,...

Daily Crunch: US government is tracking our phones more...